2018 marks the 150th anniversary of the TUC. What can we learn from this landmark moment in Manchester history? 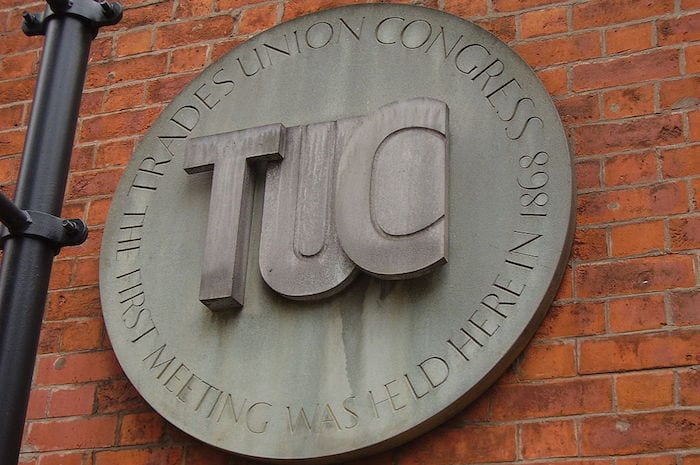 In 1968, the Trades Union Congress was exactly a hundred years old. The first meeting – a bringing-together of representatives of different trades to debate collective action – took place at the Mechanics Institute on Princess Street in Manchester in June 1868.

In 1968, most people of working age – whether in manual, clerical, or the professional sector – assumed they had a job for life, with all the security that brings.

In the second half of the 1960s, there were jobs in manufacturing and other industries. We appeared to be economically strong, and technological advances were promising boom times ahead. Some people were struggling, but the deprivations of the 1930s were a distant memory.

In 1868, Manchester and the surrounding towns were full of factories and mills employing workers all hours, with little attention to safety in the workplace and poor pay. The workers pushed back against this exploitation, of course. Throughout the nineteenth century, Manchester was a hotbed of political action.

In 1968, a hundred years on, millions of workers were benefitting from decades of TUC demands for “a fair day’s work for a fair day’s pay.” Trade union action secured, for example, safer working conditions, sick pay entitlement and redundancy protection.

During those first hundred years of the TUC, the structure of work was fairly constant. In 1968, Britain was still a manufacturing nation as it was in 1868, with major employers like GEC and ICI employing thousands of people in their factories. Other major industries included the nationalised coal industry.

Public services employed hundreds of thousands of people on good wages and guaranteed pensions. Trade union membership was growing, reaching a high of 13.2 million in 1979.

But by 1979, a lot had changed. The country’s manufacturing base was shrinking, thanks to multiple factors including competition from cheap imports from abroad, and failures to invest. Coal production was half what it was ten years earlier.

And by 1979, Margaret Thatcher had come to power with a mandate and a determination to curb trade union power. Then came the miners’ strike, a watershed moment in the era of mass manufacturing industries and potential jobs for life.

In 2018, we’re now 150 years on from the first meeting of the TUC. Among local Manchester organisations which will be marking the anniversary in June are the Mechanics Institute on Princess Street, the People’s History Museum, and Manchester City Council.

From this weekend (27th April), the Working Class Movement Library in Salford is staging an exhibition of archive material relating to the TUC entitled The Power of Unity.

On June 8th, Manchester Histories Festival is staging a day of events which includes a guided tour of the Mechanics Institute and a walk entitled Radical Salford, which includes a visit to the site of Three Crowns pub on King Street in Salford, where the idea of that first congress had been mooted some eighteen months earlier.

The Histories Festival TUC Day programme concludes with an onstage interview I’ll be conducting with Frances O’Grady, the current TUC general secretary. We’ll be talking about the present and future, as well as the past.

It’s a crucial time for the TUC. The anatomy of work in 1968 – manufacturing industries at the centre of British economy, and most people employed directly by large-scale employers – would have been recognisable to the founders of the TUC, but currently the world of work is in chaos.

The new reality of work is so far from the situation fifty years ago. The structures of secure employment have almost entirely broken down, and trade union power appears to be on the wane.

Few people now have any kind of job security. Three and half million people work for businesses recruiting staff on self-employed, temporary and zero-hours contracts. In this so-called “gig economy”, workers face the double hit of poverty wages and weaker employment rights.

On the other hand, many people in full-time work don’t have any sense of job security either, or even an affordable living wage. The impact of uncertainty and poverty is having a negative effect on individuals, families, and society in general.

The forthcoming TUC anniversary gives us a chance to highlight the psychological and social cost of job insecurity in our current era, and ongoing issues, including equal pay, and to debate how workers’ rights can be strengthened in 2018.

The TUC is making the best of the new challenges, recently helping Uber drivers campaign to be classed as workers rather than independent contractors, and supporting Deliveroo couriers taking legal steps to gain union recognition and workers’ rights.

Studying history reveals what changes and what stays the same. The world of work has changed in our era, but what remains the same is that workers need defenders as much as ever. In what ways can the TUC play this role?