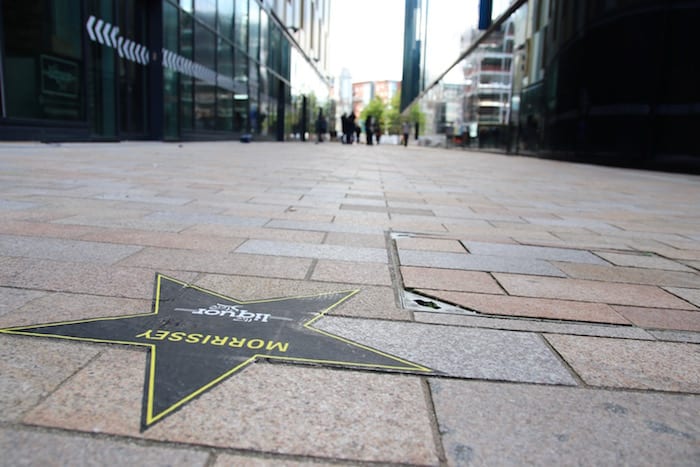 Inspired by the famous Hollywood Walk of Fame, Star Walk celebrates 20 of Manchester’s most popular icons as voted for by you – the great people of Manchester.

Stars of the screen, both big and small, also have their names enshrined on the Star Walk, including Danny Boyle, Maxine Peake, Caroline Aherne, John Thaw, Les Dawson and, swapping the cobbles of Corrie for a street of stars, Tony Warren. Also in the mix, are suffragette Emmeline Pankhurst, professional stargazer Brian Cox, and finally, adding a poetic and artistic twinkle to Star Walk, Lemn Sissay and L S Lowry.

“Manchester is at the heart of everything we do at The Liquor Store,” says Liquor Store co-owner Doug Waldron. “With First Street being an artistic breeding ground, opposite the famous Hacienda building, it seemed fitting to open our new bar in style by celebrating some of the city’s brightest stars.”

But don’t delay. The temporary Star Walk installation is only in town for one week so get yourself down to Jack Rosenthal Street before Monday 10 October to snap a selfie with your favourite star #StarWalkMCR

The Liquor Store First Street opens on Saturday 8 October, offering a vintage Los Angeles vibe with strong Mancunian influence. The new bar will be serving up classic American dishes daily and the drinks menu promises to be packed with innovative cocktails, including the Made of MCR, the latest cocktail creation which combines all the famous flavours of the city in one seriously tasty drink.

The Liquor Store first opened its doors in Manchester in 2012 on the corner of Blackfriars Street and The Parsonage, underneath the Maybrook House building, and was named ‘Best City Centre Bar’ in the Eat, Drink, Sleep Awards. Bare brickwork, vintage Los Angeles Liquor Store signage and a bar crammed with a collection of the most desirable liquors from around the world are just some of the goodies waiting to greet you.

Now with a second home on First Street, expect the city of Manchester to be the standout theme of the bar with a subtle nod towards American bar culture. Feature walls are dedicated to some of the city’s most loved sons and daughters, with everyone from Liam and Noel, Ian Brown and Morrisey to Nobby Stiles, Davy Jones and even Les Dawson watching you as you drink.

It’s quirky, original, creative but inherently stylish – just like the city itself. The bar ambience is transformed at 5pm with the help of its indie, rock ‘n’ roll, classic rock and pop soundtrack blend, featuring more than a fair share of Mancunian favourites.

Visit theliquorstore.co.uk to register details for the official opening party.