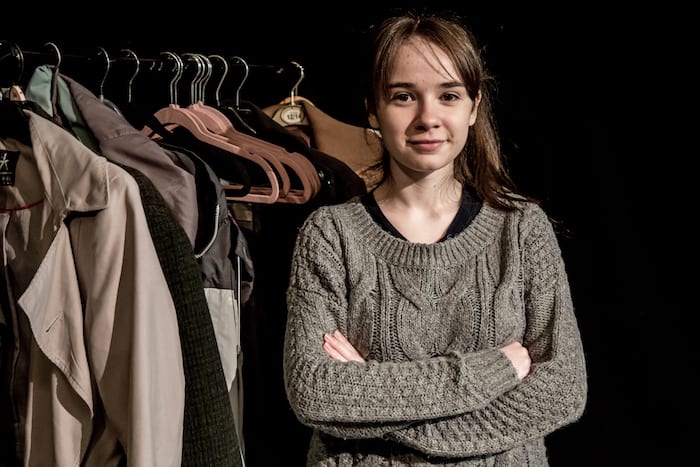 A 16 year-old Salford schoolgirl is to have her first play performed at Salford Arts Theatre.

Libby Hall’s Things We Tell The Hours After Midnight looks at the relationship between young and old people and the way adults’ behaviour influences that of their children.

The play will offer an insight into how people behave when they think no one is watching.

Libby says she got the inspiration for her play just by observing things going on around her.

She remembers a particular event that sparked her interest and made her think about the influence the actions of adults have over children’s attitudes and behaviour.

“I was sat on a bus with my friend and a group of young people got on and came and sat next to us. She just immediately felt really intimidated. When we got off, I asked her why she felt that way. She said that, in her experience, it’s younger people who tend to be more abusive.”

Libby thinks youngsters see adults behaving in this way and copy it.

The cast are aged between 11 and 16 and the characters are based on people she has met.

“Some of the characters in the play are feminists, some are quite political, some are a bit messed-up. There’s a mixed bag.”

Libby, whose dream is to get a play on Broadway, takes her inspiration from another Salford girl who wrote her first play when she was only 19.

“It all started last year when I did my monologue for Shelagh Delaney Day,” says Libby.

“Then Roni (her teacher) asked me if I’d like to write a play. I said that I definitely would and then it all stemmed from there.

“Shelagh Delaney was from Salford like me and she was young, working class when she first wrote her debut play, so I just see a lot of myself in her. It just makes it seem like it is possible.”

She is grateful to Salford Arts Theatre for giving her the platform and the confidence to write the play.

She has been part of its Young Performers Company since she was 10 and says the  drama classes she attended there every Saturday helped her through the process.

“We would be doing some improvs and short scenes and I would take inspiration from that and write my scripts.”

Her favourite thing about acting is the storytelling aspect.

“You can just tell stories to an audience and become a different person every time. I think that’s my favourite thing about it.”

Libby, who started working on the play back in January, hopes to make a future career out of writing and acting.

Things We Tell The Hours After Midnight is part of the Greater Manchester Fringe. There is still time to register a show. It welcomes new ideas including drama, comedy, circus, live music, magic, poetry, spoken word, visual arts, exhibitions, debate and interviews.

And there is no age limit on taking part. In 2015, great grandmother Joan Breen staged her first play Heavy Breathing which she wrote at the age of 69.

The full programme for Greater Manchester Fringe 1-31 July 2018 will be revealed on Tuesday 1 May, when tickets go on sale.