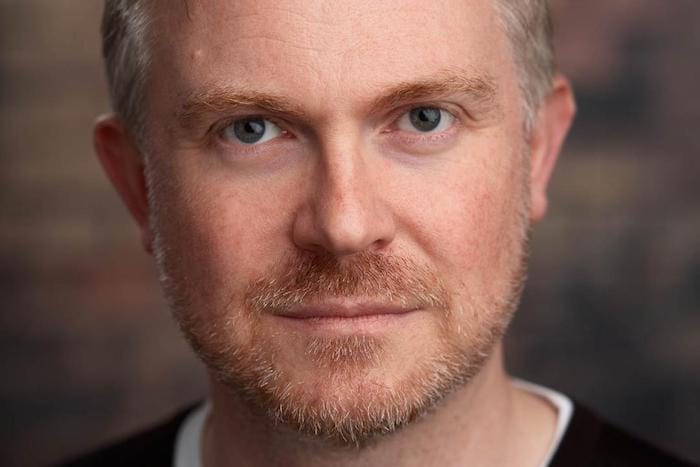 Liverpool-born Andrew Fillis grew up in Southport and moved to Manchester in 1991. He trained to become an actor here and appeared as Lindsay Corkhill’s baddie ex-husband Gary Stanley in Brookside and DC Hunter in medical drama Always and Everyone.

He produced touring plays for many years and then went into teaching at drama schools in the north west.

He is currently a lecturer in acting at Staffordshire University and lives in Greater Manchester.

Andrew plays John the clairvoyant, a conman with good intentions, in The Shawl, a short play by Pulitzer Prize winner David Mamet at 53two from the 28th November until 1st December.

It sees his return to the stage after many years, together with some talented young Manchester-based actors, some of whom he has trained.

Although he has worked in television, he prefers the theatre. “I like the idea of a group of people sitting in a room and sharing an experience,” he says.

“I love Manchester too,” says Andrew, “which is why I have stayed here for all of my career.”

Originally I wasn’t going to be an actor. I was going to be a solicitor. I’d done some bits and pieces of drama classes but I never really considered it as a sort of viable option. It just never occurred to me that it would be something I would even be allowed to do. And then, when I was about 17 a friend of mine, whose parents were part of a local amateur dramatic society, said they were looking for boys to be in the panto and they asked me if I was interested. I really enjoyed it and then I got hungry for it.

Who have been the biggest influences in your work?

The actor Brian Cox is someone that I’ve always looked up to because he always brings this human quality to his work and I think that’s beautiful. Other major influences on my life are people like Wyllie Longmore who was one of my teachers in drama school and founder of the Arden School of Theatre.

I think my proudest achievements come in two categories. First, there are certain productions that I’ve done when everything just came together and things turned into a really fantastic experience.  We all kind of aspire to those moments where everything just clicks and things fall into place and we become part of this amazing thing that you share with an audience.  Secondly, there are the students that I’ve taught and the young people that I’ve worked with in terms of developing and I’ve been very proud on a personal level to be part of their journey of growth.

I don’t think there is one! Nowadays, it’s mostly teaching at Stafford University. At the moment I’m working with the first years. There can be very long days working from 10 in the morning till 10 in the evening on occasions. But no day is like the other and the thing is, when you’re training actors, it’s always about the individual.

What do you do on your days off?

I do go to the theatre quite a lot, either to support because I’m quite passionate about trying to support all the theatres in Manchester and that is good for work in a variety of different levels but it’s also about the feeling of being part of a community. I also like going to the cinema and then it’s friends and family really.

What’s the best advice you’ve been given?

One of the things that stuck with me for the last 25 years or so, is that I was told: “You do your best work when you do it for somebody else.” If my character is working with you and I do something that makes you hate me, if my work makes you generate those feelings, then I’m doing my job right. I take the same principles when teaching as well. It’s never about me. It’s always about the students.

If things hadn’t worked out what would you be doing?

I probably wouldn’t have enjoyed being a solicitor. Realistically, I think I have an artistic inclination so I’d probably still be involved in this field. I might have written or directed, but these are all things I do now, to be honest. Probably teaching is what I would’ve done.

Tell us one thing about yourself people would be surprised to hear?

I’m actually not a fan because I’m not Manchester born and bred.

I love the Museum of Science and Industry. I just find it fascinating. Then there’s Manchester Cathedral which is beautiful. I’ve actually had the chance to perform there and it was quite a privilege. Now, this is going to get me into trouble because I’m going to try to choose a theatre that I support – and I have to say I do really like all the theatres in Manchester – but I’m going to say Hope Mill theatre.

I’ve been here since ‘91 so I’ve seen huge changes in the city like the beginning of the trams and The Lowry being built. Manchester is such a massive place now and it’s still changing all the time and growing and I think that’s brilliant and it’s really positive but inevitably you don’t want it to become too big that it loses its heart and soul. Growth is great but you just want to make sure it’s balanced.

What do you love the most about the city?

Its soul.  I think although Manchester is a big city, you can always feel a connection with people. You can go into town and go and just say hi to people, it’s such a colourful place.