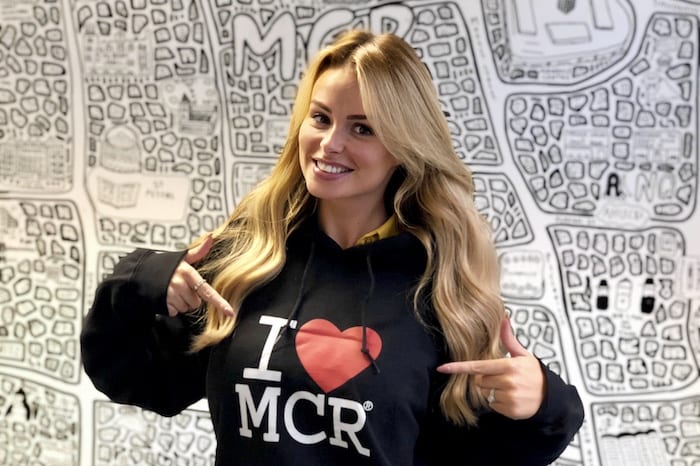 Rhian Sugden isn’t shy when it comes to getting in front of the camera. And as the longest standing Page 3 girl in the UK, the northern beauty has firmly cemented herself in the modelling hall of fame.

Bury-born Rhian fell into the industry after school bullies prompted her to have a professional photoshoot. But the ugly duckling turned into a swan.

Now residing in Prestwich, her career highlights include featuring in huge brand campaigns for Lynx and Anne Summers – and becoming the face of Pot Noodles as the Pot Noodle Siren.

Boasting a number of TV and film credits, Rhian was a housemate on Channel 5’s Celebrity Big Brother in 2012 and would love a shot at taking on the jungle in I’m a Celebrity Get Me Out of Here.

Her work used to see her travelling to London three or four times a week for shoots and castings but now Rhian is focusing more on the campaigns she wants to work on so she can spend more time at home with her husband, actor Oliver Mellor, and on her other work ventures.

The Mancunian model has just joined the I Love MCR team as a features writer – so expect to see lots more of her in the months ahead.

I used to get bullied in school for being the ugly duckling. I saw that one of the people that bullied me had a photoshoot done, so I thought, ‘well if she can do it, I’m going to try and do it’. My pictures were spotted by Samantha Bond who at the time was Katie Price’s agent, and within a week of having them done I was signed up to her agency. It was never a career that I aimed to go into. It was just for my confidence really.

When I was younger Katie Price used to be a big influence for me, but like I said – I never wanted to get into modelling so I didn’t really have any influences when I started out. The business mind of Katie Price is what inspires me, I think she’s very clever in what she does – so my aim is to have some kind of empire going on like she does.

I was part of a testicular cancer campaign that photographer Rankin shot. It went out to 10 million people on YouTube. People still send me messages about that now. I helped save five men’s lives because of that campaign. They discovered lumps from what they learnt from the video and went to the doctors. The video was great too. It’s basically me looking like I’m about to strip off and then I whip my shorts to the side and a pair of hairy testicles fall out. It’s for MCAC. It was shot about eight or nine years ago and I got a message about the video just last week. I like to re-share it on social media to help with awareness.

I commute from Manchester to London because that’s where practically most of my shoots are. I refuse to move to London. So I’m up at 6, to the train station for 7 on an extortionately priced train and then my call time is normally 9 or 10. Make-up for an hour, hair for an hour and then we normally shoot for about six hours. It sounds really boring. I’m not selling it very well am I, but I love it. I normally have a few rails of outfits to choose from and then it’s about 10/15 underwear changes. Then I hop back on the train and come back.

I lie horizontally, watch Netflix and eat loads of rubbish food. My weird thing is, I like watching scary films on my own in the dark, because I like feeling genuinely scared – so I’m two episodes into a new horror series at the moment and really enjoying it. I also play on my PlayStation. At the minute I’m obsessed with GTA and The Sims. I’m busy quite a lot so I don’t get many days off to just relax.

I really wanted to be a midwife and it’s actually still the long-term dream. I’d love to be a midwife. The training process is hard, I think it’s five years now. To take myself out of full- time employment now to go into training just wouldn’t work – maybe after I’ve had kids I might be able to look at that later on in life.

I’ve got my own business. It’s an online sex shop – it’s very random and I just fell into it really. I woke up one morning to the neighbour banging on the door saying, ‘your things are all over the driveway!’. I opened the door and their were dildos all over my driveway and they didn’t belong to me! There was a big black one stuck in the middle of the drive way and it was the school run time. Me and my partner assumed that I’d been set up by someone trying to make a story out of it. I was actually really upset by it because I had to pick them up which looked like I was claiming responsibility for it. I did some research for them online and realised how expensive they are and that’s how I ended up getting into it. We never found out who did it.

I’m not really a football fan but it would have to be Red.

Cottonopolis, the Opera House, because that’s where my husband proposed to me, and Hawksmoor for the amazing food.

The weather. We need more sunshine.

I love Manchester’s nightlife, I think it’s so varied there’s so many different things to do. And also I love the people – the people of Manchester are what make it such a great city.