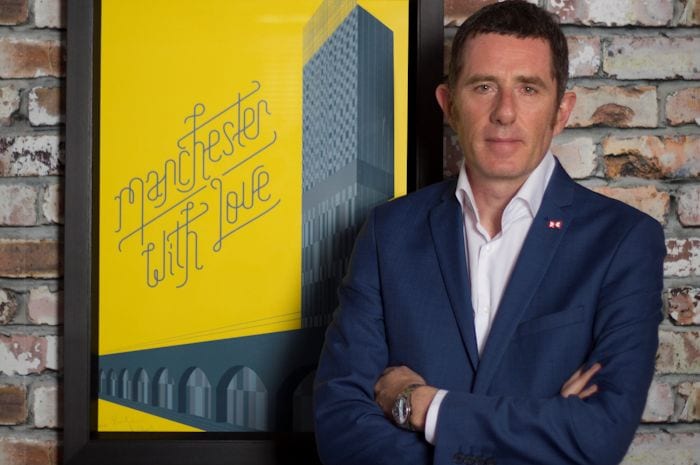 Brother is an award-winning office technolgy hardware business providing products and support to businesses across the globe which started out as a sewing machine manufacturing company in Japan in 1908. It moved its UK headquarters to Audenshaw in 1968.

Phil Jones began his career there in 1994 as a fax salesman and relocated from its Surrey office to Manchester the following year. He climbed the ranks and has been managing director since 2013.

His love of cycling has seen the company expand its involvement with the sport. Brother Cycling – motto ‘at your side’ – now sponsors some of the biggest races in Britain including the Tour of Britain for both men and women riders. The company’s neutral support vehicle offers universal support to every team and rider, benefiting from brand visibility at the events. This year Brother will sponsor its own team for the first time.

I fell into sales by accident. I used to work in the pub trade in Dagenham, but when the place got torched I decided I’d had enough. I went to see a recruitment consultant and the first job I was offered was as a trainee salesman with London Office Systems.

Two psychologists, Steven Sylvester and Shelly Rubinstein, made me see my potential as a human being and understand how my brain worked. And two Japanese seniors at Brother who were like father figures to me, Hiroshi Suzuki and Shoichi Kayaba, taught me how to work cross-culturally and help build the company to what it is today.

Being made MD was an incredible moment in my life. What me? I’d never gone to uni but had always worked hard. It just goes to show where you come from doesn’t dictate where you’re going. My mum was very proud.

I’m an early riser, up by 7 and in the coffee shop by 8, going through social media. I arrive at the office in Audenshaw by 9am and go through my emails, see the staff, have client meetings and visits, and do a lot of number crunching. I’m out the door by 6.30pm, as is everyone. I lock up myself and make sure everyone gets home at a reasonable hour.

I ride my bike, about twelve hours a week, 8,000 miles a year. Bikes are a big part of my life. Although I’m quite colourful and not completely one dimensional. I love music and still manage to get to the occasional Northern Soul night with my wife.

Never make permanent decisions on temporary emotions. That’s always served me well. Not overreacting or saying things you’d regret caught up in a moment. Always take a step back and make better decisions.

I’ve a big love of music, so maybe a soul DJ. I still enjoy buying records and have a decent vinyl collection. I’d be happy to pursue that.

I have the Freedom of the City of London. Part of that ancient right allows me to drive sheep across Tower Bridge should I want to.

Neither. We used to sponsor City before football sponsorship became too expensive, then we found cycling.

Ezra & Gil in the Northern Quarter, great coffee and quick fresh food. The Manchester Velodrome, an iconic hub of sporting performance not many cities have. And John Rylands Library, an immense piece of architecture in the middle of the modernity of Spinningfields. You can’t help walk by and look up.

Manchester needs to invest more in the cycling infrastructure, with more protected cycle lanes making it safer for people to make that choice. Many people still perceive it’s too dangerous to cycle to work, but everyone would benefit from both better health and overall wellbeing if they took up cycling regularly. And more cars off the road would be cleaner for the environment.

The personality of all the different areas, and the intimacy of the city. Everything in the centre is in close proximity, walking distance. It’s easy to do business, meet people, and settle here. A big city with a small feel.