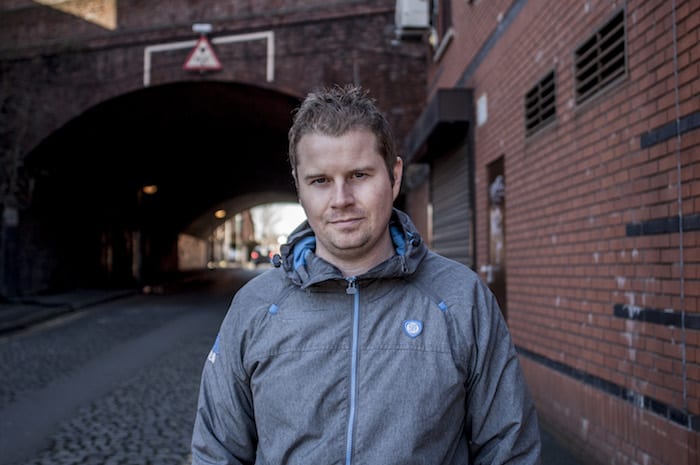 Derbyshire born, Manchester based, anti-establishment, modern day anarchist and entrepreneur Mark Ashmore doesn’t believe in doing anything by the book. Or by halves. His early acting career gave him a taste for the creative, behind-the-lens world of producing and directing. He shot his first feature film, The Lost Generation in 2013.

He didn’t stop there. He launched Future Artists, ‘a socially conscious collective of artists, creative thinkers and entrepreneurs working across a variety of art forms’ in 2009. Attracted by the cheaper rents on Chapel Street but unable to secure a bank loan, they opened Home Of Honest Coffee, a coffee shop, creative and free co-working space – motto  ‘Why pay to work in the city?’ – thanks to funding from 155 Kickstarter backers, with profits firing straight back into the creative community that helped him. He repeated the process and secured the empty premises next door for Future Artists Studios which opened in June with an interactive photographic exhibition by Lawrence Watson.

Always wanting to give something back, and show budding hopefuls that if he can do it, anyone can (armed with the right tools and steely determination), Mark is about to run one day workshops for budding entrepreneurs on how to launch a start-up business and life skills of the entrepreneur.

Frustration. Future Artists was born in 2009 during the Manchester International Festival. If you do interesting work, and talk about it enough on social media, people will back and support you. Without deviation from the norm, progress is not possible. That’s the beauty of what we do, finding new ways to generate income got us started and it’s how we evolved, showing others this is how you can do it too.

On my film work and the culture of my companies, George Lucas. Everyone in Hollywood turned him down, but he found a way to do things for himself. For £10 million, a relatively small budget at the time, by pretty much inventing the special effects industry and Pixar, he managed to make Star Wars, one of the most influential films of all times. His pioneering spirit is what I am passionate about. And the Future Artists concept was based on United Artists formed by Charlie Chaplin who had complete creative control over his work. He wasn’t dictated to by the money men and that maverick approach is everything we stand for.

All this. I always wanted to work in film production and had directed my first full length feature, The Lost Generation, by the age of 31. Then I thought, ‘I’ve made it, what do I do now?’ So I took all that knowledge and put it back into the community, with Honest Coffee. The fact that people believed in us and funded our start-up, actually gave us the money to open, is amazing. Future Artist Studios was built the same way, fully funded in two weeks.  It’s quiet beautiful really.

I work a four day week as health is the most important thing. I make to-do lists. What I can achieve in those four days. I focus on the stuff that needs to get done and delegate to my team. My day starts around 7am and I try to finish by 7pm.

I jump on a train and go to a new place. I might book a hotel when I get there. I walk. I sit in a pub. I did a lot of backpacking in the past, on my own, around Asia and America. I love to travel. And eventually, I want to live by the sea.

My Dad used to say ‘if it was easy, everybody would be doing it.’ My advice would be don’t quit, figure out another way to do it. Because if you’ve got the drive you can achieve anything.

Well things haven’t really worked out on this journey, they constantly keep changing. I mean, I don’t even know where I’m heading (apart from that beach in Abersoch) but I can’t see myself doing anything else. I’m having fun at the moment.

I’m dyslexic but never let that hold you back.

This & That. That’s sustained me over the years as you get a massive meal in there for about £4.50. Albert’s Schloss is my favourite bar. You can see money’s been spent on it, but spent well. And The Portico Library, a secret gem. I’ve been in there a few times. It was like the internet of its day.

The council and the leaders of the city should understand the effects of all the gentrification that they impose. There is a huge disconnect between their vision and that of the people. They need to consult at grass roots level and introduce more creative thinking, and stop pushing out the independents.

The independent spirit and people that get it. A place where you can fail spectacularly, yet somehow still succeed.

The workshops start in September in Manchester and London