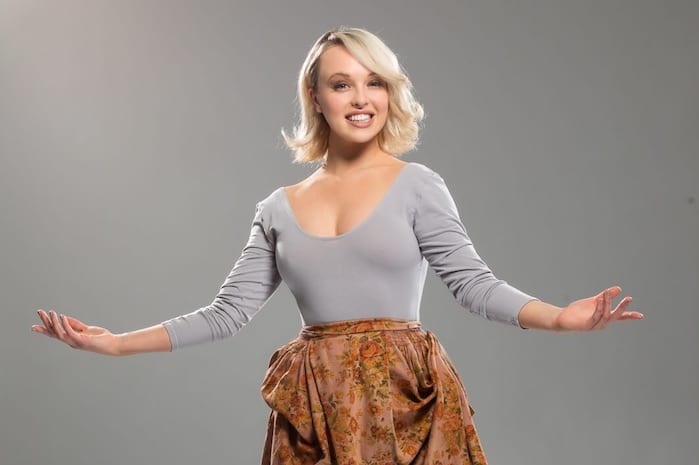 Jorgie Porter is no stranger to the spotlight.

From finding a love of performing at the tender age of three when she started ballet lessons at a local church, to signing up for I’m a Celebrity Get Me Out of Here in 2015 – and everything else in between – the Trafford-born actress has had a very successful and lucrative TV career.

She landed her first TV acting role in 2008 on Hollyoaks where she played the troubled Theresa McQueen, a member of one of the soap’s most notorious families, for over eight years.

She has also appeared on several reality TV shows including Dancing on Ice, where she finished as runner-up, I’m a Celebrity and, more recently, popular E4 dating show Celebs Go Dating.

Opting to take a step back from reality TV, Jorgie is going back to her roots and making her theatre debut as Iris Kelly in Fame the Musical which starts a UK tour at The Palace Theatre on 20 July.

When I was 3 years old I went to a local ballet school, and when I was 16 I was lucky enough to get a scholarship to a dance school. Sometimes the ballet classes were really hard, so I’d skip some of them and do acting classes instead. And then my acting coach Karen managed to get me an agent, and after a few months working in Greece as a hotel rep I came back and got the part of Hollyoaks.

With your new role in Fame, how have you found going back to dancing?

It melts my heart, I am so excited. It’s like when you have a dream as a kid, and then doing it as an adult – nothing can top that. I’d say it’s like scoring a goal if you’re a footballer. I’m 30 now, so doing a full routine with a cast of 20-year olds is a bit daunting. Dancing doesn’t really leave you, obviously there’s certain things you can’t do as well but it just takes time and effort.

What is it that attracted you to Fame?

I’ve been wanting to do theatre with a live audience for a long time – I’ve loved doing reality TV but now I just want to step away from that a bit because I’m getting a bit bored of myself now – I’m a cringy person. Acting for TV is amazing, but once you’ve filmed it – it’s watched once and then you forget about it and it’s gone. Whereas theatre and live shows have the audience interaction. And it’s not as though I’m a one woman show – Fame has a group of incredible talent, I’m so lucky to be part of such a talented cast.

TV and theatre are completely different. How have you been preparing?

Rehearsals are really tough. For the past month we’ve rehearsed every day. With the dance routines, there’s a movement to every single beat. I had a moment last week where I thought I couldn’t do it, but I guess everyone feels like that at some point, don’t they? Theatre is louder, it’s bigger and more energy, but I’ve got pretty high energy levels anyway, so I think the theatre is the ideal place for me really.

Iris Kelly, she’s the new girl at school. She’s a bit cocky and stush. If you met her you’d probably think we’re not going to be friends. She falls in love with Tyrone Jackson and has a nice romantic journey. It’s a brilliant story of a white girl and a black boy finding love during a time a segregation, because back then it just didn’t happen. She’s oblivious to the fact he is struggling because of the colour of his skin, and after he explains it to her she admits her own problems to him that she’s actually poor and can’t even afford ballet shoes.

They are the funniest group of people. I’m in awe of all of them. They’re all really helpful. Most of them are fresh out of graduation so they’re all really on it and very talented. It’s a privilege to be working with them.

What’s your favourite scene and why?

There’s a scene with me and Tyrone where we argue and then we kiss loads while we dance, and the routine just keeps getting better and better every time we do it. It’s like having an on-screen boyfriend, you become connected. And the more we rehearse the routine, the more chemistry that’s created between us.

Do you have any funny stories you can tell us about during rehearsals?

During our first week of rehearsals, we were in Deptford and there wasn’t any air con. This was right at the beginning of the major heatwave, and me and one of the other girls bonded over the fact that we were constantly soaking wet with sweat. There was only us two who looked like we’d just got out of the shower. We were really embarrassed about it, although we laugh about it now!

That’s a tough one, everyone already knows everything back me. I’m a trained life guard. And, before I first got into acting I used to work at a hairdresser’s sweeping up hair and used to dance around with the brush. People would walk past the window thinking I’m a right weirdo.

I love Manc phrases, all of the things that were beat out of me at ballet school because nobody understood a word I said haha! Manc-isums – is that a word? I think I’ve just made that up! But yeah, I love Manc-isums.

I love the Northern Quarter, there’s new brunch places popping up all the time. Places where you can take your dogs, like Worsley Old Hall – which is my favourite place to take my dog and hectic in the summer. And the theatre. It’s pretty epic going to the theatre isn’t it?

Fame the Musical is at The Palace Theatre from 20th – 28th July.