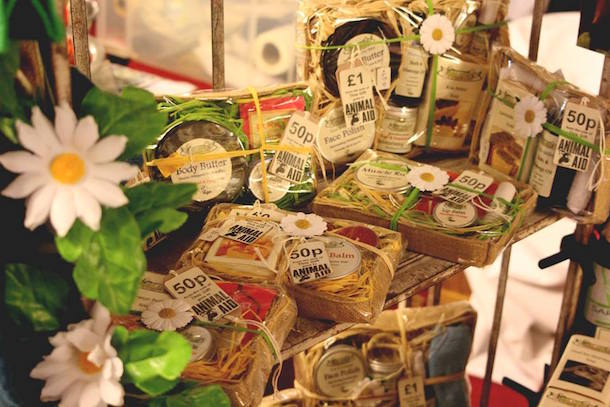 Over 200 stalls will be springing up across five Manchester venues selling everything from cakes to cosmetics on Saturday 23 April 2016 for The Northern Vegan Festival 2016, with cooking demos, live music and film screenings also scheduled
Share
Tweet
Share
Chat

The Northern Vegan Festival 2016 is a chance for you to try some seriously amazing food and find out more about the vegan lifestyle.

Whether you’re vegan or just curious, there’s something for everyone, and with stallholders as varied as Captain Cakeman, Trishul Raw Chocolate, and Lady Liver Tea, some seriously inventive produce is to be expected.

Sacha’s Hotel on Tib Street will be the biggest venue for the day with over 95 stalls, a vegan organic farmers market and a raw food fair. There’ll be a café area in the USA ground floor suite and a free food fair in the Kennedy Room.

Not far away on Oldham Street is Venue 2 – the Methodist Church Central Hall. Here you can expect another 81 stalls, as well as cookery demos, films and talks.

Venue 3 is The Castle Hotel, also on Oldham Street, which will offer vegan dog food tasting from 12pm till 6pm. Canine companions are welcome to come along and sample delights from Europe’s biggest seller of vegan pet products, Veggie Pets! There’s live music into the evening, too, with vegan musicians Sally Crosby and Kye Oram playing between 6-8pm.

The entertainment doesn’t stop there, with vegan artists spinning sound well into the night at venue 4, the upstairs room of Gullivers, where Gareth Evans will be playing as well as Birds and the Beats, Sarah de Warren and Meredith Baker. Cat lovers can also check out the vegan cat food offers at Gullivers throughout the day, with samples to take home for your feline friend to enjoy.

Finishing things off is Venue 5 at The Thirsty Scholar close to the university campuses, which will be spreading plenty of cheer with a vegan wine, beer and cider festival from noon to 3am!

The festival will be running from 10am until 6pm at all the venues apart from The Thirsty Scholar, and entry to the lot is just £3. Not only is this great value, but it goes to a good cause – all proceeds will be donated to animal welfare charities.

“We are absolutely thrilled that Viva! is partnering with the Northern Vegan Festival,” says Juliet Gellatley of campaigning charity and co-organisers, Viva!

“Our joint shows attract thousands of people from Manchester and beyond, helping people save animals, the planet and their health and discover a whole new world of food! NVF is fun – a celebration of vegan living. Come along and try the delicious vegan food. You never know you may just love it!”

For more information on The Northern Vegan Festival visit the website: www.northernveganfestival.com