Willy Caballero: From Zero to Hero 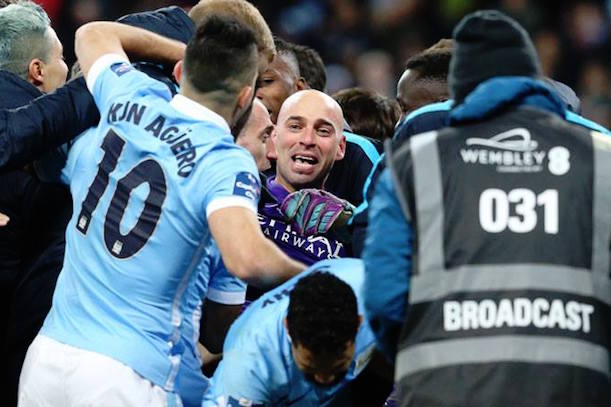 It’s the Capital One Cup Final and another trip down to London. As a City fan used to many years of suffering, I was surprisingly apprehensive about the match, especially the way Liverpool demolished us at the Etihad earlier in the season.

The only saving grace was the paper talk that Manual Pellegrini might be swayed by public opinion to put Joe Hart back in goal as he wanted this piece of silverware before he sails off into the sunset.

So it was with dismay, resignation and shakes of the head all around that the throngs of City fans converging along Wembley Way greeted the news that Willy Caballero had been named as the custodian of the City goal for the afternoon.

For heaven’s sake, Pellegrini, it’s a Cup Final not your average run of the mill game. Was this his two fingered salute to the City directors for dumping him from a great height once Guardiola flashed his eyelashes?

Willy Caballero. An accident waiting to happen. Probably the closest thing we have had to   ex-United goalkeeper, Paddy Roche.

Often referred to as Manuel Pelligrini’s love child, Willy Caballero had spent most of his career in Spain, playing for Elche and Malaga, where he played under Pelligrini. In the summer of 2014, he signed for City.

Before the final, he had received criticism in the national press following the 5-1 defeat against Chelsea in the FA Cup where he was adjudged to be at fault for two of the goals. As a result, many Blues’ fans expected Joe Hart to play.

And to cap it all off, this was against the lethal Liverpool forward line of Coutinho, Sturridge and Firmino. Heaven help us!

As the game progressed, something strange happened. We actually forgot Calamity Willy was in goal. Assured, confident, and a save in extra time which created a sense of  disbelief amongst the City supporters. Was that Joe Hart in disguise?

As referee Michael Oliver blew the full time whistle, the realisation dawned on us. A penalty shoot out. I looked at my friends as if to say, “Well, should we leave now?”And to make matters worse, he wears the number 13 on his back. There was no way Willy would bail us out.

But then memories of the play-off final of 1999 came flooding back and we stayed.

And then the proverbial miracle happened. Willy Cabellero turned from an ugly duckling into a swan. Three wonderful saves later and the Cup was heading back to Manchester.

Bloody hell. Calamity Willy was no more. He had single handily won us a cup!

The City fans behind the goal rose to acclaim their new hero who was engulfed by the entire team then carried on Wilfred Bony’s shoulders to salute the crowd. Cue songs about Willy that are much too rude to mention here.

Willy Caballero. A City legend for ever more, following in the footsteps of the revered Nicky Weaver, the Wembley penalty shoot-out hero of 1999.

After the match, Pellegrini said he would rather keep his word and lose the match. Many pundits said that the performance was a lesson in loyalty and that both Caballero and Pellegrini deserved an apology.

Should we have doubted his faith in Willy? Probably, but then us supporters always know best, don’t we?