Will Manchester have a 2018 Champions League winner? 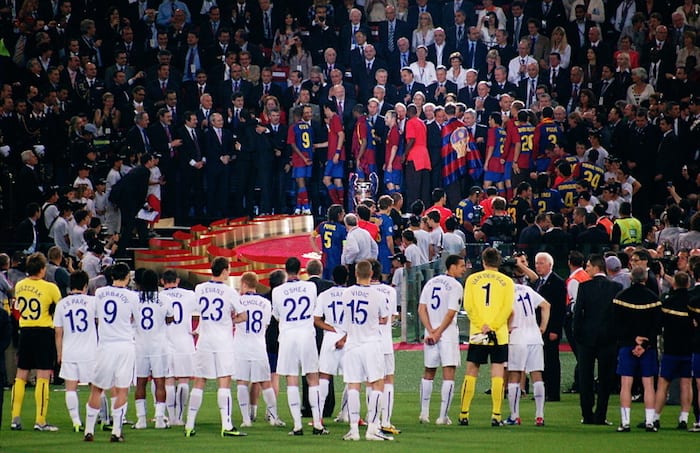 The English teams are all looking strong in this season’s Champions League. With all five sides having played their first leg and none of them losing, confidence is high.

City and United were both handed favourable draws against average teams with the first leg away from home. Pep’s team demolished Basel last week and have booked their spot in the quarter-finals.

United did enough on Wednesday to leave Seville with a 0-0 draw that should be built on with a win at Old Trafford.

But could either side go all the way and make sure one half of the city is celebrating a Champions League win in May?

City are the more obvious candidates. They’re steamrolling the Premier League and were tipped for a historic quadruple before Monday’s FA Cup loss at Wigan.

Their form in Europe this season has been close to their Premier League best with five wins from six in a tough group with Napoli, Shakhtar Donetsk and Feyenoord. Their only loss was in Ukraine with a weak team having already qualified.

There are no question marks over the attacking pedigree of this City vintage. They dominate, work the ball quickly and have world class players in Kevin De Bruyne and David Silva pulling the strings in midfield.

Despite being written off in the media over the last couple of seasons, Sergio Aguero continues to do the business. He has 29 goals in all competitions this season and, crucially, four in six in Europe, including a goal and an assist against Basel. We all know he likes a goal in the big games too. If City are going to have any chance of European glory, it’s on Aguero rather than their younger attacking options. Big game strikers win you trophies and he is one.

The biggest question marks with City concern their defence against the best sides and their mentality in this competition. It’s the one they’ve always wanted to win but have fallen short in the last few years. Last season’s loss to Monaco simply wasn’t good enough.

Pep has previous in this competition winning it twice with Barcelona but has never made it past the semi-finals since. At Bayern he was tasked with European glory but lost in the semis each year. Can he do better with City? They’ve got a really good chance.

So, onto United. The thing with United under Mourinho is that when they get it right they know how to manage a game. That’s what they did against Sevilla.

Other than a wonderful save by David de Gea, the Spaniards never really looked like scoring. United contained them and did what the manager asked. If they don’t manage to go through at Old Trafford after that, serious questions will be asked.

Managing games away from home (and then in the final) was what won United the Europa League last season. Mourinho’s pragmatic ways might not extend to the most exciting free-flowing football, but they usually work. And they could take United far in this competition.

United’s group was easier, but they did manage to come unstuck in a torrid display against Basel away from home, losing 1-0. City hammered them 4-0 away.

In this fixture United tried to manage the game, keep Basel out and nick a goal. They missed a load of chances and Basel nicked one at the end themselves. Not good game management. United have also been disjointed going forward of late, with both the team overall and star striker Romelu Lukaku struggling in the big games.

And herein lies the difference between the two sides. Both will go into the biggest games with a plan. City to take it to the opposition and United to contain.

To win the Champions League this season, it’s likely you’ll need to beat Real Madrid at some point. Either in the final or en route. Who would you back against Los Blancos? Aguero to get the better of Sergio Ramos, or Chris Smalling to contain Cristiano Ronaldo?