What happened when the Drunken Butcher took on the Real Junk Food Challenge? 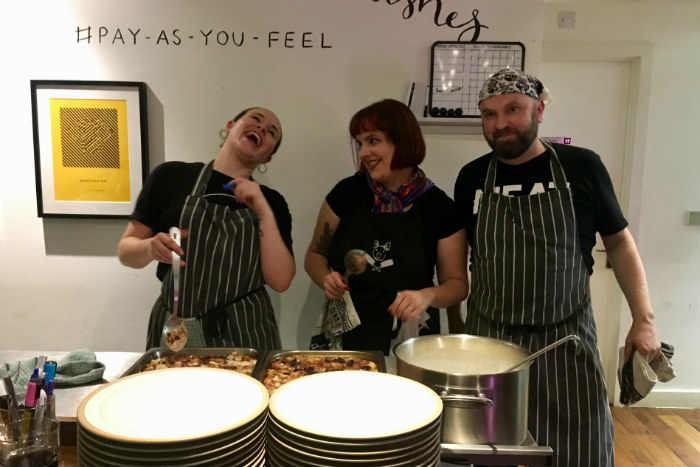 As well as serving breakfasts and lunches created using food that would otherwise be destined for the bin, the UK’s first waste food pay-as-you-feel restaurant on Oxford Street also hosts supper clubs, including the notorious Real Junk Food Challenge.

Chefs are tasked with creating a feast of several courses for 50 guests from whatever ingredients have been salvaged that day. Those who have previously accepted the challenge include Ernst Van Zyl, Robert Owen Brown, Mary-Ellen McTague and the late MasterChef: The Professionals star Matt Campbell.

The latest to take up the gauntlet was Iain Devine, known to many as the Drunken Butcher.

It’s a daunting task, and in the days leading up to the challenge, Iain tweeted that he was “bricking it.” So how did he get on?

“I was kind of stitched up,” Iain laughs when I ask how he got involved. “Adrian, who works with Real Junk Food, has been to a few of my events before. When they said they were looking for guest chefs, he tagged me in on a Facebook post. Me being me, I say yes to everything and then worry about consequences later.”

Food waste is something that Iain has been thinking about a lot over the past year, in his own kitchen at home as well as in restaurants. Around 15 million tonnes of food is wasted every year in the UK alone – and most of it is perfectly edible.

“It’s crazy the amount of food we waste, not purposefully but it’s really easy to do,” he says. “In an ideal world we would all go to the butchers, greengrocers or fishmongers on the day we want to eat that particular thing. But I live in the real world too, and I go to the supermarket as much as everyone else.

“One thing I’ve started to do is to not go shopping when I’m hungry, because otherwise I buy far too much. And I look at store cupboard ingredients which last longer, like pulses. It’s really about being a bit more mindful, and working out what you’re going to cook in advance. And it helps your wallet too, which is always nice.

“When I worked in restaurants, the amount thrown away was staggering. But it makes no sense for businesses to throw things away. At the end of the day you’ve got to pay for your waste as a business. So it’s really two birds with one stone if you can get all your food waste taken away for free. It’s still a good thing.” 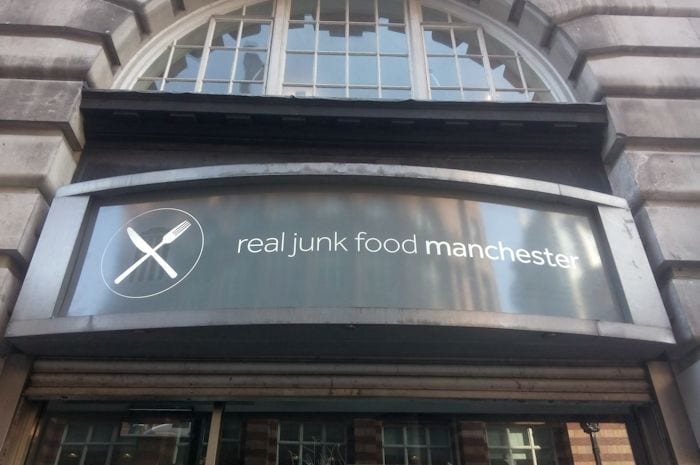 Iain visited the restaurant a couple of days before his event to check out the kitchen and to ﬁnd out what sort of ingredients he might be working with.

On the day, he had hours to create and prepare a ﬁne dining menu for 50 guests using only the ingredients they had rescued from being thrown away. And he had to offer veggie, vegan and gluten-free options, too.

The ingredients come from a variety of sources, from leftover Ocado deliveries to New Smithfield Market and even chain restaurants such as Nando’s. 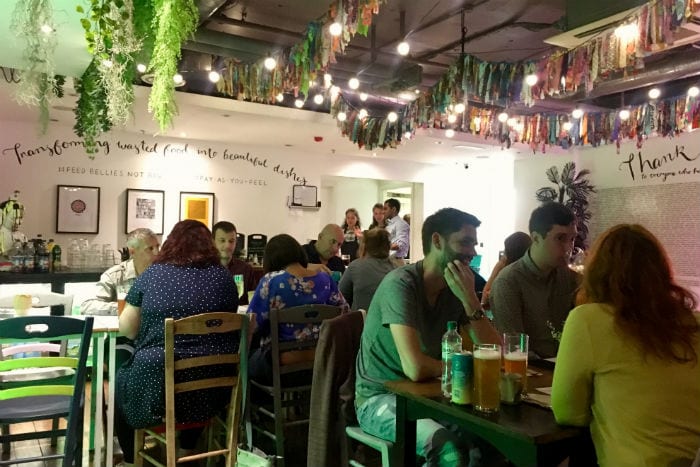 The meal started with a delicate, fragrant green vegetable soup made with celery, asparagus, courgettes and parsley, garnished with asparagus spears and herb oil. An impressive start.

Next up was a dish of braised carrot with braised shallots, onion marmalade, spring onion and sage, which, like the soup, was also vegan and gluten-free.

“Sometimes you’re led by the ingredients,” says Iain. “One thing that was an absolute blessing was we had been given a load of pre-prepared shallots that had been peeled and vacuum packed. I thought, ‘I have to use those’. That was the basis of that dish. I wanted them to be the star, not just a supporting act.” 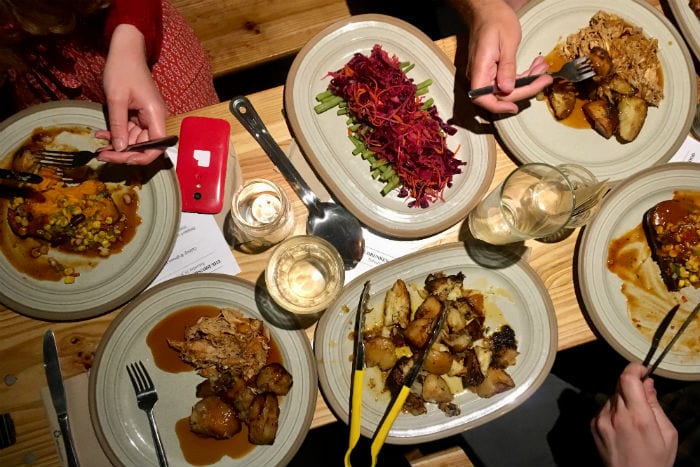 The main course of BBQ pulled chicken with roast potatoes, green beans, spiced red cabbage slaw and a glossy gravy made with IPA, maple syrup and rich chicken stock was a huge hit on our table. The vegan alternative, tender baked sweet potatoes topped with succotash and spicy tomato gravy, received equal praise. So how did Iain manage it?

“We had some bits and pieces of chicken that had come from supermarkets,” he says. “Different chickens, different cuts. And in the freezers they had quite a few from Nando’s that had been blast frozen but Nando’s didn’t want to re-use. I obviously couldn’t do whole cuts because I had so many different bits.

“I’ve been listening to a lot of Creedence Clearwater Revival recently, that deep south kind of sound. So I had that buzzing around in my head, and then I went in and saw the blackened Cajun spices. JW Lees donated 48 bottles of Founders IPA that was slightly out of date, though of course it was absolutely fine.

“So I had that idea. Slow cooked pulled chicken and spiced roasties, and then an IPA gravy. It kind of came from my musical choices really. If I’d been listening to Suede, god knows what we’d have had.” 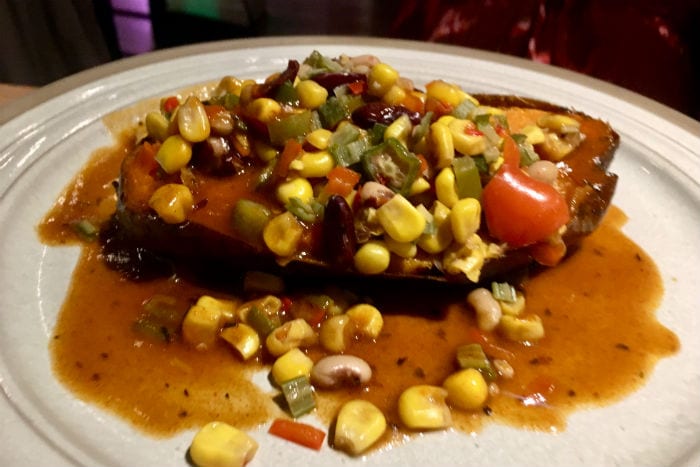 The way people ate at the event was also important to Iain, who served his main course on large sharing platters for each table.

“I wanted to do a couple of plated dishes,” he says. “But I also love family style dining. It’s my favourite way to eat, everything in the middle of the table and people pile their plates up. It’s happy, and it gets people interacting.”

Dessert was more of a challenge, Iain admits. He used a mixture of various sweet treats – crumpets, chocolate chip brioche, fruit scones – to make a hearty bread and butter pudding with maple syrup and custard, and guests queued up to be served canteen style.

“I could have plated it myself, but I thought let’s have some old school – literally – fun,” he says. 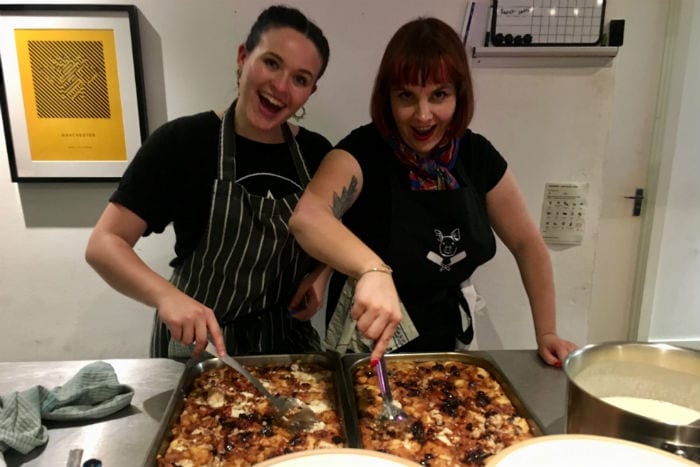 The vegan alternative, created by Hispi chef Karl Kivell who assisted Iain in the kitchen, was smoked and caramelised banana with watermelon granita. It was frankly astonishing to think it had been created from ingredients otherwise destined for the bin. It would be a hit on any restaurant menu.

It wasn’t all about the food, either. Tom Higham, the man behind Northern Quarter sherry bar Flok and Didsbury’s Wine & Wallop, created two cocktails using waste ingredients. The first saw slightly-past-its-best-but-still-drinkable prosecco cooked down and blended with homemade gin and peach syrup, while the second used donated IPA for a fluffy concoction with raspberry, caramel, lemon and cinnamon.

“What Corin is doing is absolutely amazing,” says Iain about Real Junk Food, the not-for-profit community interest project run by Corin Bell, which will soon launch a waste food catering business. “I hope they can find a permanent home in the city centre.

“That great concept where people who maybe aren’t that well off but can go in and have a cup of tea or a meal, and they’ve taken it to another level in actually giving people balanced meals. What the chefs do there is absolutely incredible, what they’re doing day in day out. It’s devastatingly impressive.”

From the reaction in the room on Saturday night, the same could be said for Iain’s event. Challenge successful.