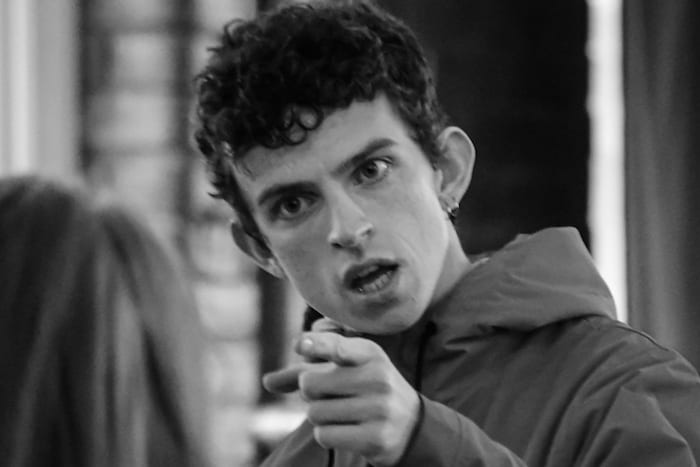 Gemma Langford’s new play lifts the lid on the colourful facade of sticks of rock, seagulls and slot machines of a seaside town and we see what lies beneath. Lesley runs a B&B which has permanent guests and doubles as a swinger’s club.

Rob (played with confidence and warmth by Dominic Holmes) counts his two pence pieces, with the aim of getting out and taking his girlfriend Cheryl with him.

She is a pole dancer and owes much of what she earns to others. She longs for what she dubs a ‘boring’ life, and she giggles excitedly when Rob says that he will buy her a slow cooker.

Marie Friend plays Lesley, who runs the run-down B&B which desperately needs a makeover. She is an interesting character, in that a bit like Shirley Valentine, she has made thousands of cups of tea but has never had anyone make her one – until now.

An elderly, well-dressed man called George arrives, and his politeness and kindness is endearing to the inhabitants of this ‘seen better days’ establishment. He comes to the Shangri-Las looking for his missing wife Linda, but ends up changing the lives of all around him.

This may seem quite twee and quirky on the outside. But this well written and beautifully performed play does take a series of darker turns, and the seaside setting suits these story arcs very well. Behind the arcades and fortune tellers is a world where many are trying to get out or they feel stuck.

Marie Friend gets better with each scene as she longs for a better life, something more refined. And George’s arrival means she may get her wish. May Kelly portrays the innocence and naivety of someone trapped in world which is not of their choosing, and her giggles are filled with an inner sadness.

Dominic Holmes is such a natural performer, working with the audience to ensure that you are laughing with his character, not at him.

Adrian Palmer plays George with a natural sweetness. He could be the old guy next door. But he also keeps enough gas in the tank to deliver something completely different in act two.

Rowe David McClelland’s Burt, complete with his stained vest and favourite armchair, is Jim Royle by the sea. But he has a great monologue about his strained relationship with his son, which lifts him out of the stereotype you think he has been saddled with.

Robyn Moore plays Linda with a real sense of wild abandonment. She has a great scene in act two which shows you how a cup of tea bought to you at the crack of dawn by a loved one could be seen as less than endearing and more like control.

There are moments when Gemma Langford’s writing goes from being a tad Victoria Wood and turns into something quite absurdist and with tropes of Samuel Beckett.

And as much Joel Parry’s play is consistently entertaining, there are some scenes which go on to long and other story arcs feel too short or underdeveloped.

Linda, for example, appears in act two, and her development feels rushed and her appearance too fleeting.

But Welcome to Shangri-La is consistently entertaining, and spending time with these quirky characters who are much more than what they seem is a genuine pleasure thanks to sparky performances and witty and unpredictable writing.

Broken Biscuits is a new theatre company based in Manchester, and I would love to see what they do next.

Welcome to Shangri-La is at The Hope Mill Theatre until 20th February.