Welcome Louis – We’ve Been Waiting For You 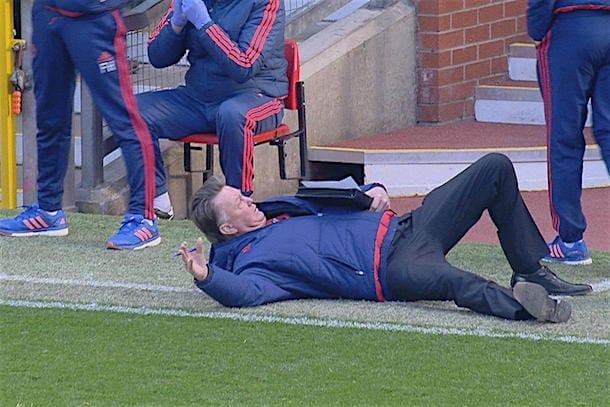 Something changed in the last few says. The old LVG has gone and in his place we find a passionate, arrogant, trustee of youth. It’s the Louis we thought we’d get - just 18 months too late, says Jonny Swindlehurst
Share
Tweet
Share
Chat

I still get that same feeling before every United match. That expectant buzz from the fans who spent the 90s being spoilt with exciting, cavalier football.

I even had it in the darkest days of the Moyes season. Although that particular bubble was usually popped after about 20 horrible minutes of shapelessly exposed centre halves and what seemed like a dreary grey demeanour from the players.

I don’t think I’ll ever lose it, no matter how bad it gets.

There’s been lots of talk this season about the current squad and tactics betraying the United principles of old. Playing football in the Busby and Ferguson way has been lost to turgid possession-based football with no cutting edge. It is a reasonable observation. But the point that’s been missed is what the United way actually is.

Lazy journos and pundits put it down to us hammering teams 5-0 at Old Trafford, playing with wingers and Scholes-esque screamers flying in off the bar. The highlights reel of Fergie’s teams suggests this, but in reality he was pragmatic and knew what it took to win each match on its merits.

Coaches like Carlos Queiroz (and Steve McClaren once) helped him to refine his style when the occasion suited. But however the team lined up there was always the underlying principle of blooding youth team products in big games, an insistence on quick attacking one and two-touch football, and a provocative arrogance – think Eric, Ronnie and even Rooney in his younger days.

It’s this latter element that so impressed about young Marcus Rashford’s senior debut. Yes, both his goals showed a van Nistelrooy-like talent for finding space in the box and finishing unnervingly, but it was also the arrogance he showed by taking on the Arsenal back line single handedly – a defence that only succumbed late on to Lionel Messi’s brilliance in their midweek Champions League outing. Rashford didn’t care about reputations. This confidence was no doubt bred from his own midweek exploits against Midtjylland, but it also flowed from the manager.

There were clear tactics to take on the opposition, keep pushing forward and bombard the box. The change was dramatic.

But it wasn’t just the intent he sent his team out with that was different about LVG. We actually saw him on the touchline in his technical area. The focus has been on the histrionics and the inevitable internet-busting Twitter reaction, but it was his passion that so pleased the Old Trafford faithful. He really cared.

The refereeing performance from Craig Pawson was shambolic at best prompting the usual Merseyside-based chants to ring round the ground – he’s actually from South Yorkshire – but it was in the manager’s power to hammer home the complaint. And he didn’t disappoint, berating the fourth official in true Fergie style. We loved you for that, Louis. We were all part of your red and white army in that one beautiful moment.

Could it be enough to save you from the sack? There needs to be much more of the “United way”, passion and probably a scoring run from an 18-year-old, the likes of which we’ve not seen before.

And either an FA Cup or Europa League triumph would do, too. Is it going to happen with a centre-half partnership with the pace of Michael Carrick and Daley Blind? Probably not.

But at least we can feel those old feelings safe in the knowledge we’re going to be entertained. At least for now.