The Michelangelo of Manchester Completes His Latest Canvas

When Manchester artist Michael Browne painted the huge, intricate, Renaissance-style painting which adorns one of the walls in Gusto Manchester, he left a space in the painting on the Central Library ledge above the pillars and thought it would be a nice idea if the public was invited to come up with suggestions for a name or phrase that best represents the city…

The painting was officially complete and unveiled this week when the Manchester Michelangelo, who is currently living in Rome, came home for a couple of days to paint in the winning phrase- “Manchester’s very own Northern lights,” which was submitted by a Cheadle woman.

“the painting
celebrates
Manchester’s
many industrial,
creative and
scientific
achievements”

The painting, which is oil on canvas and over 5 metres across by over 1.8 metres high, took six months to complete and is staggering in its detail. It celebrates Manchester’s many industrial, creative and scientific achievements and features iconic people, places and scenes from Manchester life past and present including the Industrial Revolution, the Manchester Ship Canal, Coronation Street, Alan Turing, Ernest Rutherford, Anthony Burgess, Elizabeth Gaskell, and Emmeline Pankhurst.

“Renaissance oil paintings have a traditional focus on struggle and mortality. So some figures are included in the painting for this reason,” says Michael. 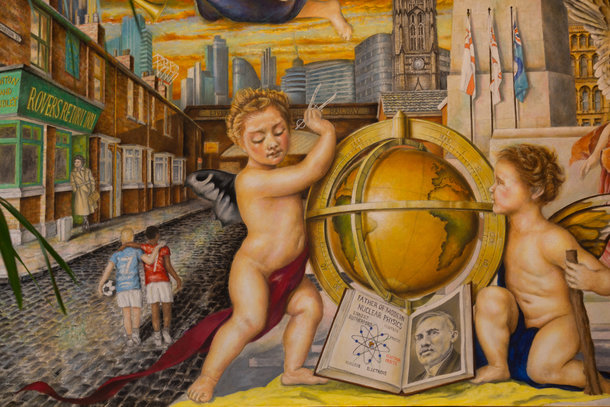 “The initial idea came about via the Gusto interior design team. The project brief centred around Central Library and muses holding books, showing faces of Manchester’s influential figures. This is the result I have come up with. Gusto’s location on Deansgate was the temporary accommodation of Central Library.”

Moss Side-born Michael painted a replica of the Sistine Chapel on the ceiling of the Cocotoo restaurant on Whitworth Street over twenty years ago. Since then his work has been bought by celebrities, exhibited in prestigious locations such as the National Portrait Gallery in London, and won critical praise from experts.

His painting of Sir Winston Churchill, Wayne Rooney and Rio Ferdinand to celebrate the 2006 World Cup, Patriotism Knows No Colour, was purchased by the Professional Footballers Association.

His 2011 painting, The Art of the Game, which famously depicted Eric Cantona as Christ, was bought by the footballer and loaned to the National Football Museum.