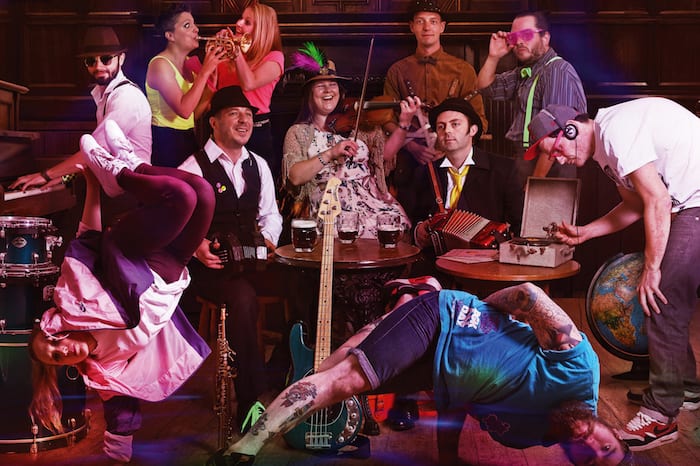 A ten-day summer festival of experiential performance, music and events comes to Waterside Arts Centre​ in Sale for ten days in July.

Highlights include performances inside a giant bird’s nest, inspirational theatre on a trampoline, and an intimate show staged inside a static caravan.

Refract:17 kicks off on Friday 21 July with King Pleasure & The Biscuit Boys, an internationally acclaimed band boasting a phenomenal 30 year career that includes opening for  B.B. King, Cab Calloway and His Orchestra, Ray Charles, and tours with the Blues Brothers Band.

Other live music gigs from acclaimed artists and festival favourites include Salford powerhouse Ren Harvey who has appeared on Later with Jools Holland and performed with the BBC Philharmonic Orchestra and is no stranger to the Manchester music scene.

Mr Wilson’s Second Liners fuse New Orleans jazz with 90s club classics and come together  for a special gig with Felix Hagan and the Family, a seven-piece explosion of new glam, high camp pop, punk and classic rock who are fresh from touring with Frank Turner.

For traditional music lovers – but with a twist – exceptional all-female band The Shee showcase their powerful and emotional vocal range and instrumental prowess with a one-off gig that promises a spot of clog dancing amidst the Gaelic ballads and hypnotic riffs.

If that’s is not enough to get your musical taste buds tingling, there’s virtuoso Spanish guitarist Eduardo Niebla and BBC Radio 2 Folk Award Winners The Demon Barbers who fuse disco with folk.

Other festival highlights Dylan Thomas’s timeless masterpiece Under Milk Wood, the play made famous by Richard Burton’s legendary recording in 1954, in a one-man performance by Guy Masterson, Burton’s nephew.

There’s plenty of stuff for kids, too, including Cirque du Soleil clown Sean Kempton mixing mime, clowning and comedy in Stuff, a playful and physical show about love; Anyway, a trampoline-based theatrical performance which tells a charming, comic tale complete with clangs, boings and unbearable hope to make your spirits soar; and Mobile, an intimate, visual and powerful show staged inside a caravan which explores our sense of home.