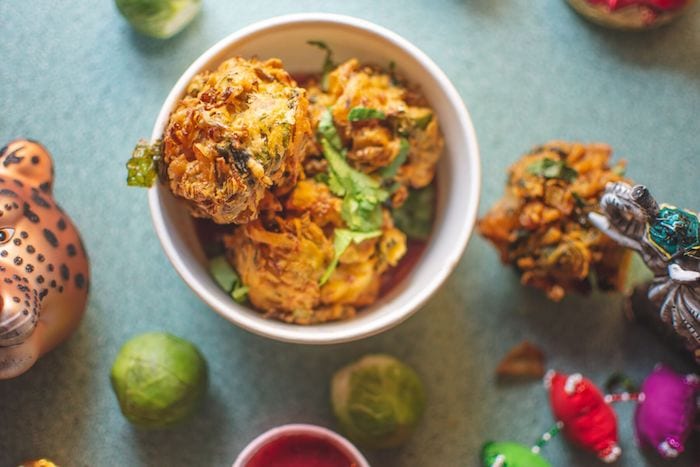 Whether you are fully vegan yourself or just fancy trying a little bit of something different, there’s no denying that vegan eating in Manchester seems more popular than ever.

We’ve already put together our vegan guide to the Christmas markets, and now we bring you our pick of places where you can enjoy some of the most exciting animal-free Christmas cuisine in the city.

From Xmas parties and buffet options, to festive sit-down dinners, there is plenty to choose from… 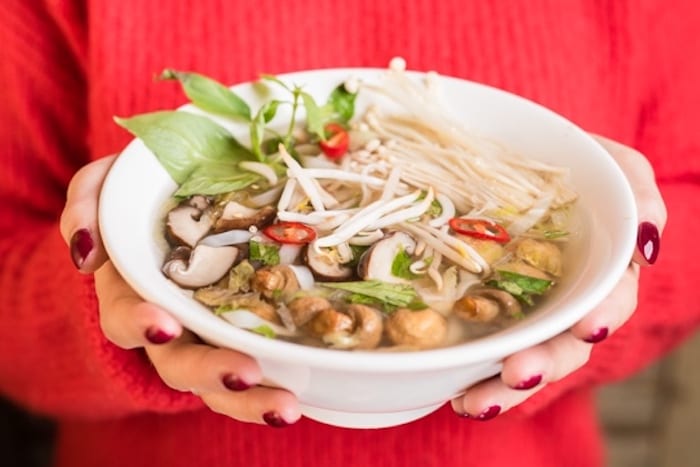 This vibrant Vietnamese eatery in The Corn Exchange is rolling out a fully vegan Christmas menu, launching alongside the non-vegan Christmas set menu – something for everyone, and ideal for mixed parties. Vegan dishes include Vietnamese noodle soups, Pho Xao (flavourful wok fried noodles), plus delicious desserts such as banana fritters and Kem sorbet. Most of the menu happens to be gluten free too – and even the prosecco is vegan. 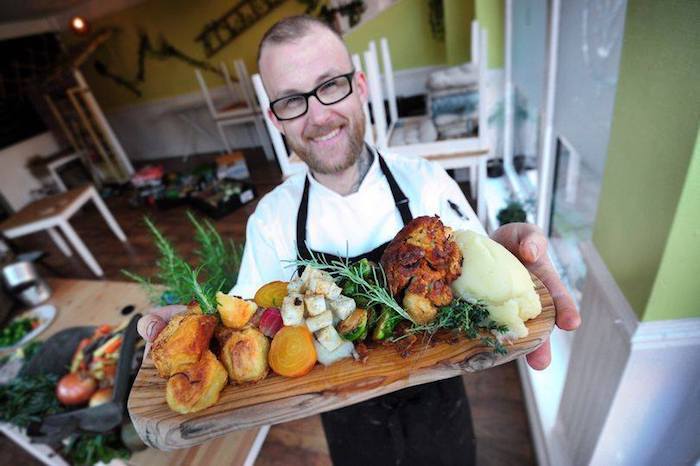 Matt Nutter’s award-winning all-vegan restaurant recently moved to Manchester city centre and is now taking bookings for the festive season. Here you can enjoy fully vegan fine-dining, with a six-course Christmas menu available at £45 per person. This includes the likes of cranberry and red wine parfait to start, brined cauliflower served in an orange reduction, and an intriguing fermented nut cheeseboard, just to name a few. 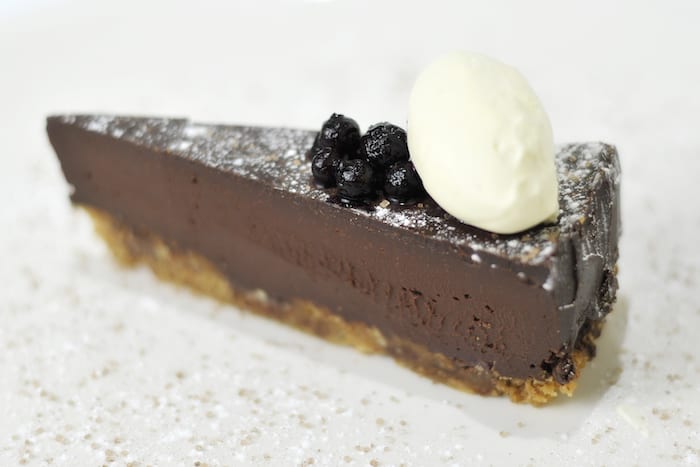 Oxford Road’s longstanding vegetarian co-operative and café’s rotating menu is ideal for winter, and The Eighth Day always uses seasonal ingredients. In the run-up to Christmas their downstairs eatery will serve classics like golden puff pastry vegan pie with red wine gravy as well less traditional winter mains like winter vegetable and apricot tagine. Seasonal sweet treats include apple and cinnamon crumble and chocolate and rum torte, plus they serve Ancoats Coffee – a speciality blend which changes with the seasons, as well as vegan hot chocolate and special ‘winter warmer’ beverages. From 17th until 22nd December they will be open until 7pm, with seasonal sampling sessions each evening.

This much-loved bar, kitchen and gig venue on Grosvenor Street is home to the legendary ‘Vegan Hangover’ – an all-vegan menu every Sunday – and they are going supersize for festive season. For one day only they are hosting a bottomless all-vegan Sunday brunch with two hours of unlimited boozing on 9th December 11am-2pm. There’s a variety of vegan options on their festive sit-down menu, with two courses for £18 or three for £22. Starters include spiced butternut soup with vegan feta, with a mushroom, cranberry and lentil wellington for main. Sticky toffee pudding for dessert seals the deal for us, plus they have dairy-free ice cream made by Withington’s own Ice Shack. 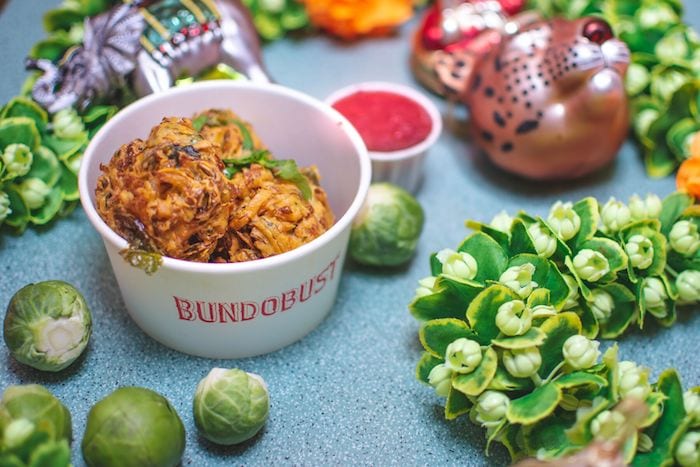 Sprout bhajis are back! All-vegetarian Indian street food eatery Bundobust are offering a number of festive specials this month. As well as the famous bhajis, they’ll be serving a vegan festive curry, and the bar staff have come up with their own festive cocktails: The Grinch, with green chilli and coriander-spiced daiquiri; and Stollen Christmas… which is like a liquid Christmas cake and needs to be tried!

This restaurant on Chapel Walks takes its name from the date when The Vegetarian Society was founded, and is all-vegetarian, with a number of vegan options. Their Christmas menu offers two courses for £25 and three for £32 – and is one of the most exciting we’ve seen so far. Vegan choices include a starter of parsnip velouté with coconut and crispy shallots, whilst mains include sous vide marmite aubergine, tamarind, lingonberry gel and charred shallot petals with white bean puree. With the likes of whipped sea buckthorn, puffed wild rice and tonka bean and black cherry gastrique for dessert, this certainly is intriguing! 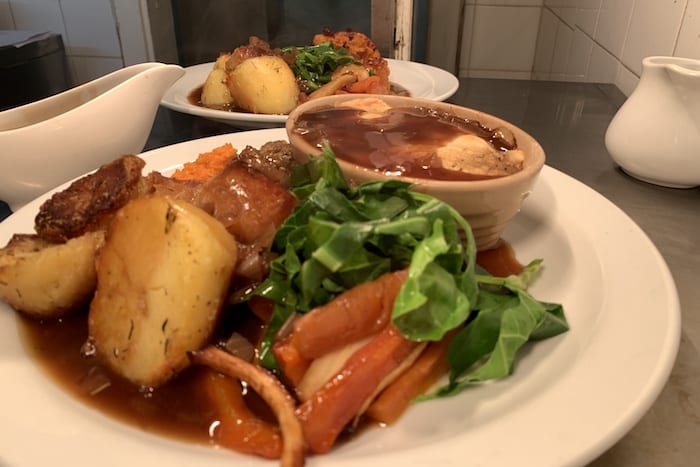 Chorlton’s first all-vegan pub kitchen, the hard work of Los Antojitos’ Kelly Bucher, is putting on an impressive menu for the festive season. There’s warming soup or a zingy salad for starter, whilst mains include a turkey style cranberry roast or a mushroom and chestnut pie. Mains are served with all the trimmings, including carrots and parsnips cooked in dandelion syrup and vegan honey. Even the stuffing is Christmassy. Chocolate torte, crème brulee and Christmas pudding (all vegan, can you believe it?) are the three desserts difficult to choose between. Different packages are available: Silver at £20 per person, Gold at £23 and Platinum at £27 – the latter including a seasonal drink from Wander Beyond brewery.

The GRUB Food Fair Christmas specials at Fairfield Social Club run every Friday and Saturday between 12pm and 10pm until Saturday 22nd December. You’ll be able to enjoy vegan-friendly street food from some of the North’s best traders including Wholesome Junkies, Yes! Doughnuts and Oh Mei Dumpling, as well as locally-brewed beer, DJ tunes and plenty of vegan options throughout. As well as special mulled wine and cider for 2018, there will also be the German delicacy ‘feuerzangenbowle’: a flaming super-charged version of gluhwein!