Steve Evets on acting, the city he loves, and working with Cantona

Not many people can claim to have appeared in a film with Eric Cantona. Steve Evets can. The Salford-born actor has appeared in Pirates of the Caribbean: On Stranger Tides, Spike Island, and on TV in Vera and Kay Mellor’s Girlfriends. But he is probably best known for the brilliant Ken Loach film, Looking for Eric. We caught up with him to chat about his memories of working on the film, which was made 10 years ago.

When I left school I joined the merchant navy at 16 and painted my way across the world going to the USA, Canada, India, Pakistan, Yemen, Saudi Arabia, and Japan. I sailed through the Panama and the Suez Canal without even having a passport. I left that and worked driving a van for a few years. I was on the dole and was bored out of my skull so I decided to pursue drama as I’d had a taste for it at school but it was never really an option. I had done a foundation course at Abraham Moss Centre on Cheetham Hill and I slogged on after that doing street theatre. I joined the Actors Centre and applied for every fringe theatre group that had an advert on the board. I had a good hit rate. I spent years learning and working hard. I never had much money so I would blag any other manual work for food and other stuff you need to survive.

What’s the best and worst aspects of acting as a profession? 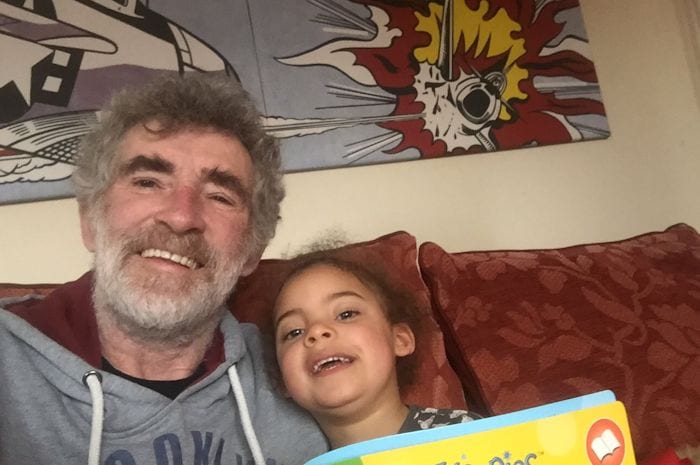 It’s hard to believe, but Looking for Eric was made 10 years ago. How was it working with Ken Loach and Eric Cantona?

Working with Ken really was a dream come true. He’d always been a hero of mine. He’s a voice in the wilderness who doesn’t compromise to attract the masses. He does it his way – he still shoots on beautiful 35mm. If you throw Cantona in the mix, we’re talking a legend sandwich here. I felt honoured to work with them both. Still do.

How did the experience compare to other jobs you have had?

Working in depth with Ken was like no other job I’ve done. First of all, you don’t get the full script. You are kept in the dark as to how it all pans out. You are given the scene a day or two before and Ken shoots the film in total sequence. You are doing scene one on day one etc but as actors we don’t know what will happen to our characters. When you are filming a scene, he will spring a surprise on you when you least expect it and catches it on camera.

When Cantona appeared behind me in a scene, I nearly fainted. I had NO IDEA he was even going to be in the film. The shock on my face is real. Also the police raid, finding the gun, having a dog set on me was done as a complete surprise. It was wonderful. The audition process with him is so intense, I was recalled 10 times and each time it involved more improvisation. I couldn’t believe it when I got the lead role. We then spent weeks improvising different scenarios that happened to the characters in the past so by the time the camera started rolling you had a really good feel for your character’s past and present but no idea of his future. It was the most interesting, challenging frightening wonderful acting experience ever. Thanks Ken!

If you could be known for one acting job only, which one would it be?

It has to be Looking For Eric. It was a challenge, an adventure and it opened a lot of doors for me.

What projects have you got coming up?

I’m in the no man’s land of ‘resting’ at the moment ie unemployed. I’ve had a mad few months of working back to back on various things. I think it all balances itself out and I’m waiting to hear from a few things, as they say. I never speak about anything that’s coming up until it’s in the can.

I love nothing better during the day than doing the cryptic crossword in the MEN whilst drinking tea and having a cig. No daytime TV, no radio, no outside input. Just tea, nicotine and brain fry. I also love to spend time with my daughters and granddaughter. She’s a little treasure. I adore her, we argue, I think kids stink and she thinks granddads stink.

The people, plain and simple. I love how direct and honest they are even when they insult you. I love the bands, the poets, the theatres, the clubs, the pubs, the venues.

Where are your favourite places in Manchester and why?

It has to be the pubs I frequent in Whitefield. They’re full of real people who don’t hold back. We seem to be constantly insulting and berating each other. There’s an old guy called Billy who saw me in Vera. My character was called Gorgeous George. He pointed at me and said: “Gorgeous George, my arse!” He was laughing so much, I thought he was gonna have a heart attack. I wouldn’t have it any other way. They all watch my back really and have rescued me many a time when I’ve been cornered.

I’d build a small outdoor stage in the city centre for The Piccadilly Rats and let them book other buskers. I’d get rid of pointless jobs like mayor and half the bureaucrats in the town hall, and kit out the underground tunnels for a homeless shelter.

Looking For Eric is available at all the usual outlets.