Sneak preview: Dusty at The Lowry 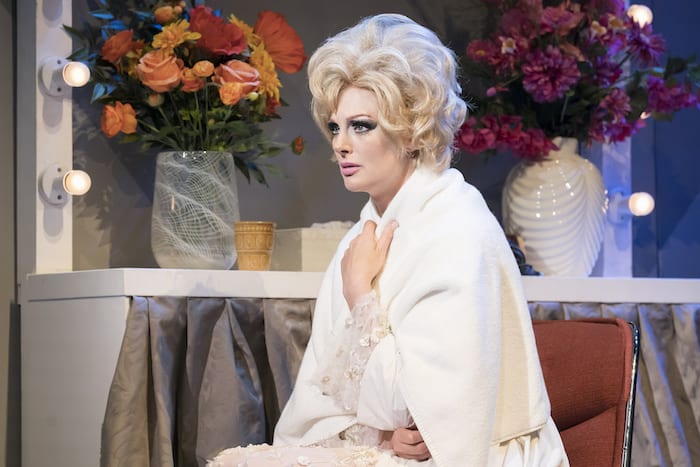 Another week, another jukebox musical.

But this time, there is some real grit, bravery and determination in Jonathan Harvey’s celebration of the loves, life and songs of Dusty Springfield.

I was lucky enough to catch the show in Sheffield before it arrives at The Lowry. Audiences are in for a real treat.

Adele, Amy Winehouse and Annie Lennox and other female singers with big voices owe a great deal to Dusty Springfield.

She broke down boundaries. Her 1969 album Dusty in Memphis, although a flop commercially, won praise from many critics, and has since been rediscovered, thanks to the inclusion of Son of a Preacher Man in Quentin Tarantino’s Pulp Fiction.

I remember seeing Dusty on Top of The Pops and feeling drawn to her. I felt she was masking something beneath the hair lacquer and the panda eye make-up. She always seemed to hold something back. As I got older and her sexuality was made public, I realised why she always came across as so mysterious and elusive.

Novelist, playwright and Corrie writer, Jonathan Harvey saw this enigma and focuses on it. He also gives the audience some of the key moments that they expect to see. So we witness true magic when the diva insists that she records I Just Don’t Know What To Do With Myself in the toilet because the acoustics are better. He also captures perfectly the loneliness and alienation that the singer often feels.

What is truly admirable, though, is that Harvey refuses to sanitise her life for a musical theatre audience.

Sometimes, in biopic-style musicals, it’s clear the dirt has been removed and replaced with the fragrance of Febreze.

Dusty was not an out gay woman, but this is not done clumsily. She is simply in love. Dusty (Katherine Kingsley) and her girlfriend, Lois (Joanna Francis) have beautiful chemistry. In another time, their relationship would have lasted the course.

We see Dusty’s highs (monumental success) and lows (drug and alcohol dependence, infidelity and low self-esteem). Kingsley makes her sympathetic, even though she is sometimes not the most likeable of characters.

There are slight flaws in the show. Dusty’s friends Pat (Esther Coles) and Ruby (Ella Kenion) would look more at home in a Victoria Wood sketch. They simply act as comic foils, and although Harvey gives them great lines, they feel more suited to comedy show than a musical.

There are spellbinding moments when Dusty sings numbers as herself, as opposed to singing in true jukebox musical style. There should be more of these concert-style numbers – when they happen the show truly takes flight.

Rufus Hound is excellent as Dusty’s manager. He has worked with Kingsley before in Dirty Rotten Scoundrels and it shows.

Tom Pye’s set design is functional but quite cheap looking and there is an over reliance on Finn Ross’s video design to fill in the blanks.

But Harvey’s writing, Dusty’s magnificent back catalogue, and Katherine Kingsley’s remarkable performance mean that you leave the theatre uplifted.

Kingsley refuses to simply impersonate. She gets right under the skin of this complex character and presents her as far more than a demanding singer. This is a woman living in the shadows, and this gifted actress portrays this through her body language and vivacious vocals, which gave me goose bumps more than once.

Director Maria Friedman has so many great moments in Dusty Springfield’s life to choose from, but if she focused more on the music and Dusty herself and cut some of the scenes with her pals, this could be a magnificent British musical to give Carole King’s Beautiful a run for its money.