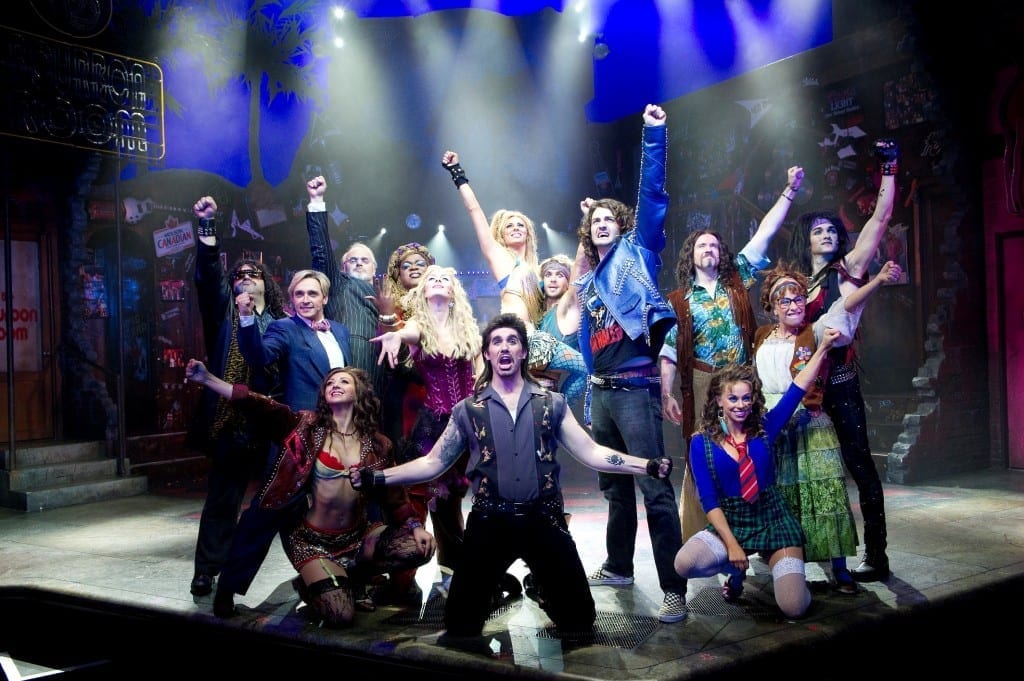 Now here is the conundrum. How do you evaluate and review Rock of Ages, currently playing at the Palace Theatre? With honesty I guess…

Absolute 80’s, NME and Heat magazine came together to spawn a cheesy over the top and somewhat lewd musical this would have summed it up perfectly sprinkled in with a heap of X Factor. It was cringeworthy from start to finish, but yet had you feeling good as you came out of the theatre as much as you didn’t want to.

So what about the story?(what little there is of it you ask)… Well here goes.

It follows a similar path to both Chris D’Arienzo’s book and the movie which starred Tom Cruise on life on LA’s Sunset Strip in the Ronald Reagan era of the 1980’s, where glam metal bands rule, and where two lovebirds arrive, one a wannabe rock star Drew (Noel Sullivan) whose tour de force was holding his notes as long as possible much to the audiences glee and a sweet innocent aspiring country girl actress Sherrie (Cordelia Farnworth) who both stumble across the Bourbon club, a rock bar ran by two unpleasant foul mouthed young rock musicians who indulge in hard drugs and exploitative sex.

This culminates in Sheerrie being seduced and promptly dumped by a rock god called Stacee Jaxx (Ben Richards) in the gents’ lavatory of the club and in her despair she winds up as a self-loathing stripper.

Enter a German developer who announces his plans to tear down the Strip – with the inevitable strains of Starship’s ‘We built this city’ – as protesters carry placards reading “Strip Clubs not Strip Malls!” led by the aptly named Regina

The story bounds along through various classics such as ‘The final countdown’, ‘Here i go again’ and ‘Waiting for a girl like you’ bordering on a slapstick comedy, highlighted admirably by two performances that both held and stole the show. Franz (Cameron Sharp) trying too hard in many ways to be John Barrowman, who plays the gay German developers son who cant decide on his own true path to love and goes straight by announcing “I’m not gay! I’m German!” and the star of the show Lonny, played excellently by Nathan Amzi who many might recall was recently seen on BBC One’s The Voice in a classic duet with Christina Marie, who played part narrator and rock sleazeball before dramatically changing tack and seductivly singing REO Speedwagon’s ‘Cant fight the feeling’ to celebrate two men discovering their love for each other, though it is a shame that scene is played for comedy rather than tenderness.

So as i vainly tried to dislike this cheesy sleaze , I felt compelled to smile as most of the more crazy audience members sing and clap their way like demented seals mainly out of tune, in what can only resemble a NOW album you can now see on sale in the aisles at Poundland!

Showing at the Palace Theatre from 3-10 May