Rewards come in many ways for Manchester multi-millionaire John Timpson 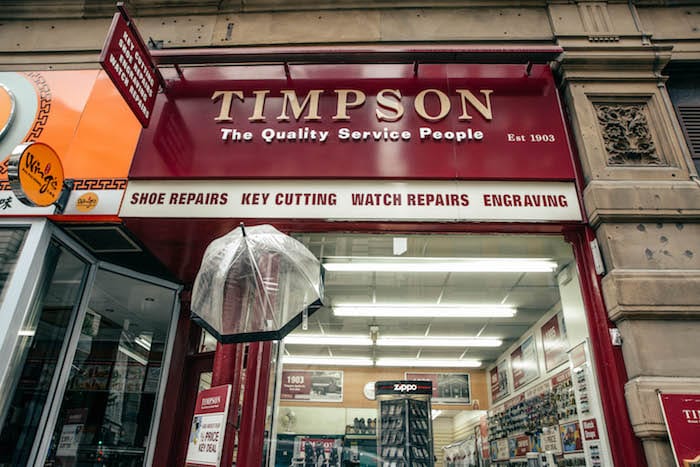 The furore over the monumental multi-million pound pay packets of Manchester United footballers Paul Pogba and Zlatan Ibrahimovic coincided with the publication of the Sunday Times Rich List last weekend.

Cue outbreaks of seething jealousy – or raging class-war resentment depending on your politics – on an epic scale.

But who would begrudge the presence in equal 678th place on the Rich List – with an estimated fortune of £165 million – of John Timpson and his family, owners of the Manchester-based shoe repair, key-cutting and dry cleaning business with over 1,800 branches nationwide.

John Timpson CBE – the honour was awarded in 2004 for services to the retail sector – is chairman of the company which has added mobile phone and iPad repairs to its portfolio of high street services.  But aside from his widely respected business acumen and much admired hands-on management style, the 74 years old businessman has an astonishing record as a philanthropist.

John Timpson heads a dynasty which has made its mark in many aspects of life. His elder son James is currently chief executive of the family business – founded in Oldham Street Manchester in 1870 by his ancestor William Simpson – and Edward, his younger son has been MP for Crewe and Nantwich since 2008. His late aunt, Dame Kathleen Ollerenshaw, who died in 2014 aged 101, former Lord Mayor of Manchester, Freeman of the City and brilliant mathematician, was one of the most distinguished Mancunians of her era.

Edward Timpson MP was appointed Minister of State for Children and Families after the General Election of 2015. It was a post for which, it could be said, he was well qualified. For he was part, with his father John and his late mother Alex, who died in January 2016, of a remarkable family story.

As well as having thee children of their own – daughter Victoria is a primary school teacher – John and Alex adopted two more and fostered a staggering 90 children over a period of 31 years, many of whom had been cruelly abused and some only days old when they were welcomed into the Timpsons’ Cheshire household.

John once said in an interview: “Because of our fostering, my children saw more of the real world than most in their position. They grew up with a sense of social responsibility and for that I am very proud…It hasn’t always been easy but my goodness, look at the memories these children have left us with.”

His good works, however, extend far beyond his extended family. He and his wife were actively involved with the NSPCC and Childline, for which they raised £2 million, helped to establish Safe Base and made After Adoption the company charity.

The Timpson Foundation has also established a chefs’ training academy linked to a hotel and restaurant at Rhosneigr in Anglesey, where the family bought a holiday home in 2003. The Maelog Project is a multi-million pound investment providing opportunities for disadvantaged young people by offering training and work placements in the catering industry.

Timpson’s run work training schemes for inmates in prisons – 270 ex-cons have joined the firm straight from jail – and currently the dry cleaning arm of the business will clean your suit free of charge if you’re unemployed and have got a job interview.

John joined the family footwear business – William Timpson Ltd, founded by his great grandfather – in 1970 after graduating from Nottingham University. He became the firm’s managing director five years later and in 1983 led a £42 million management buy-out of the company which had become part of the Hanson Trust.

In 1987 he sold the shoe shops to a rival chain and concentrated on building up the shoe repair and key-cutting business which, with additions, now turns over £260 million a year and makes profits of over £20 million.

John’s own “Meet the Timpsons” profile describes his style as “maverick management.”  His philosophy is that if you treat people well, they will do a good job. He has written several books on his methods including Dear James, which passes on to his son the lessons he learned during 30 years as a chief executive.

A weekly columnist for the Daily Telegraph for nine years, he says: “You can never sit back and think your job is done. I visit 800 shops a year because the only way to run a business is to meet the business.”