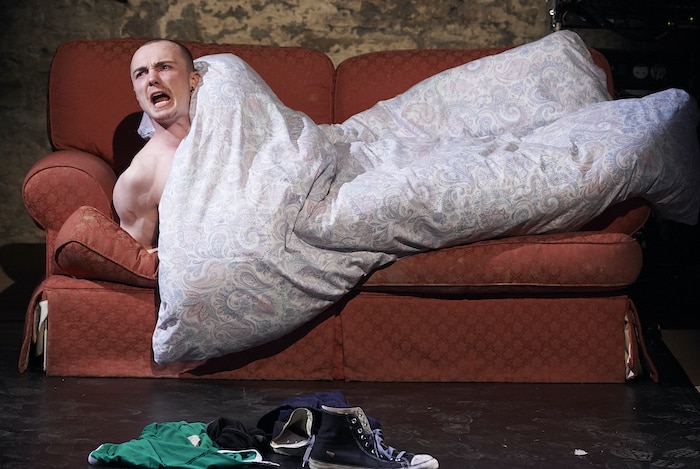 Much like the highly successful Danny Boyle movie, the stage production is set during 1990s Edinburgh amidst the city’s heroin epidemic.

The story exposes the dark side of Edinburgh and the struggle of a working-class group of friends existing within a broken society who find escapism only in their heroin addiction.

Based on Irvine Welsh’s original novel, this stage version is produced by The King’s Head Theatre and In Your Face Theatre – which is a perfectly fitting name for what is to come during the show.

Upon entering, immediately you are greeted by flashing lights and blaringly loud dance music that echoes throughout the corridor, making you feel as if you are heading towards the dance floor of a nightclub rather than a theatre.

As you are pointed to your seats, the ensemble cast rave to the music which immerses you into the show skilfully, giving you the sense that you are in for something quite different to your typical stage production.

Rather than simply watching the show, you feel part of it.

But from observing the audience I would be careful who you bring to this one. Nudity, arse cracks in your face and faeces being flung are not for the faint of heart. Understandably, not everyone has a cracking sense of humour.

If you are a fan of the movie you will remember ‘The worst toilet in Scotland’ scene. For this theatre adjustment, the toilet is placed right in the centre of the audience, ensuring the spectators close to the action receive a good few splash of the murky toilet water.

The story centres around Mark Renton (Andrew Barrett), a local Edinburgh lad in his mid 20s living at his Mum and Dads house.

Struggling to navigate the relationship with his destructive bunch of friends and his battle with heroin addiction, you cannot help but share Renton’s feelings of hopelessness as an audience member.

Barrett’s portrayal of Renton is slightly different to what I expected, but his version works perfectly in this show.

The show contains more comedy than expected too, but it delivers in ensuring there is impact during the plot’s darker scenes.

Tommy (played by Greg Esplin) conveys the vulnerability of his character brilliantly, nailing the comedic elements of his character whilst delivering in the more harrowing moments which happen as the story progresses.

Lauren Downie and Olivier Sublet both deliver terrifically in their dual roles, and Michael Lockerbie produces a superb performance as Sick Boy, who pulls at your heart strings in one of the shows more darker scenes.

The stage is sparse and stripped back, featuring just one couch at the end of a long narrow space, which works really well in convincing the audience you are inside a dingy flat.

However, the narrative does move at a highly fast rate as each character narrates the action to the audience in-between speaking to the other characters. Which unfortunately, sometimes allows the story to become slightly lost and you find yourself wondering who some of the more minor characters are.

But luckily, it’s not enough to completely prevent you from understanding the story, especially if you have seen the film.

The show is led skilfully by director Adam Spreadbury-Maher and co-director/actor Greg Esplin, who manage to add their own unique edge to such a brilliant story.

Additionally, the sound design by Tom Lishman in the production is exceptional in bringing the feeling and sounds of a nightclub to a theatre.

Funny, gruesome and even horrifying in parts. This stage adaption definitely serves as an entertaining reminder as to the horrors of drug use.

The show will appeal to people with a particular sense of humour and if you are a fan of the movie or book, this stage adaption is a must-see!