REVIEW | The Bodyguard at The Palace Theatre 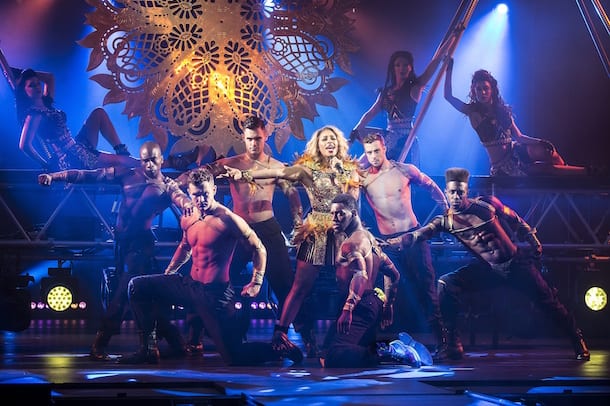 There are very few movies which stir the emotions of a passionate affair more than the 1992 film The Bodyguard with Kevin Costner & Whitney Houston. Mike Strul went to a theatrical production which hit town this week at The Palace Theatre…

The words “Houston, we have a problem” must have been the first thing on the producers mind as who to cast to play Whitney’s role. Step forward Alexandra Burke (2008 X Factor winner) as Rachel Marron, and what a fantastic performance she gives especially with the spine chilling rendition of the classic songs I Have Nothing and, of course, I Will Always Love You.

“The Bodyguard
makes great use
of the fact it is a
stage production
rather than film.”

There are lots of other Whitney numbers in a show which sometimes feels more like a concert than a drama, especially as Alexandra is far better known as a singer than an actor. The musical, which opened on Broadway before transferring to London’s West End, features a host of well known classics including One Moment in Time, I’m Every Woman, I Wanna Dance with Somebody, and Where Do Broken Hearts Go?

The stage production is subtly different from the film’s storyline as Frank Farmer, a former Secret Service presidential bodyguard excellently played by Stuart Reid, is hired by Rachel’s manager Bill Devaney (Mensah Bediako) after threats on her life from a really rather scary obsessive fan (Mike Denman) whom we meet in the spectacular opening sequence lurking menacingly in the shadows until bursting into violence with a mighty bang of gunshots ringing out.

Despite seeing her as a spoilt diva, he reluctantly accepts the job and Frank’s concerns are quickly realised as he quickly discovers the job is far from straightforward. Rachel looks upon Frank as being paranoid and his extensive protection techniques as being over the top and intrusive. Naturally, Rachel’s existing bodyguard Tony (Sion Lloyd) resents Frank’s presence. 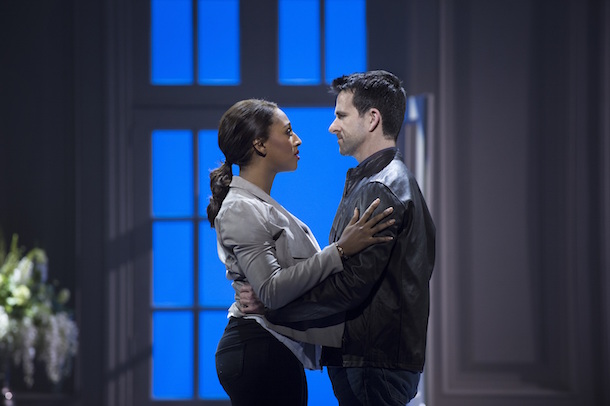 Everything boils over when at a concert where Rachel is performing a riot breaks out, and Frank rescues her from danger. The immediate aftermath brings the two of them closer together and a tempestuous affair begins to blossom between the two as they become lovers.

His tough, no-nonsense style also melts the hearts of Rachel’s sister Nicki (superbly played by Melissa James) as a love triangle starts to emerge and she reluctantly has to play second fiddle to her superstar sister. Losing out in the love stakes to Frank, she hides her considerable vocal talent in a tardy downtown local bar.

The gulf between Alexandra’s delivery of powerhouse ballads like Greatest Love Of All and Run To You, and Melissa’s softer, more engaging, interpretation of Saving All My Love which is both beautiful and moving, is a triumph for both.

Sadly, for Nicki there is to be no happy ending.

Frank’s macho style plus the gun he carries also impresses Rachel’s son Fletch, and despite excellent vocals from the leading lady, one of the highlights of the performance was Reid’s comically sung karaoke scene in which he dismembers “I Will Always Love You” with great aplomb.

However, without doubt the stage totally belonged to Alexandra Burke, whose performance sizzles from the pyrotechnic opening song Queen Of The Night to her note-perfect rendition of I Will Always Love You.

There are also some fabulous costumes changes, with Burke’s final dress of black sequins shimmering in the atmospheric swirl of smoke and flashing laser beams which engulf the stage. The audience were on their feet and cheering well before she had finished.

The Bodyguard makes great use of the fact it is a stage production rather than film, with superbly slick set changes which cleverly widen out or focus our attention which duly brings a slice of magic to Manchester. Particularly impressive was the silhouette screening of the couple’s time together towards the end of the show

With West End standards and star quality throughout the cast, it’s a delight to witness a musical theatre production truly at its best.

Anyone who was a fan of the original film will leave reminiscing and singing along to songs they know. Defiantly one of the best productions I have seen on stage in Manchester in 2015.

This was a truly phenomenal show. Don’t miss it

Now playing at The Palace Theatre until January 9th 2016, so book today for the best seats in the house at www.atgtickets.com/Manchester or by calling the box office on 0844 871 3019.