REVIEW: Priscilla Queen of the Desert at the Opera House

A story to coincide perfectly with Manchester Pride... 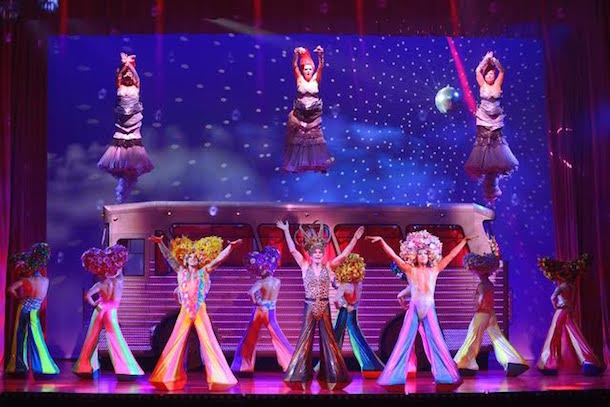 Okay, my darling boys? Or is it girls? Are you sitting comfortably? Then I’ll begin. Let me tell you a story to coincide perfectly with Manchester Pride.

With tutu and pom poms in hand I trotted off to the Opera House to see the wonderful, witty, outrageously camp, hilarious production of Priscilla Queen of The Desert starring Duncan James, formerly of boy band Blue, as Tick, the leader of an expedition across the Australian outback from Sydney to Ayers Rock.

Ably assisted by Simon Green as the old drag queen Bernadette and Adam Bailey as young Adam, this odd trio of drag queens travel in a battered bus called Priscilla. Along the way they encounter hospitality and homophobia as well as discovering their true colours.

Tick learns to be a dad, Bernadette meets a lifelong mate, and even the unruly Adam tones down his flirty flamboyant ways.

The theatre production follows the hit movie The Adventures of Priscilla Queen of the Desert which acquired cult status in 1995.

The ensemble bounds across the stage with bucketloads of vim and vitality with stunning costumes and wigs worn by a talented crew of singers and dancers and a low flying trio of divas hanging perilously on a wire high above the stage as they belt out hits of the 70s, 80s and 90s with energy and gusto. Hats off to Lisa Marie Holmes, Laura Mansell and Catherine Mort who have voices to die for.

One of the stars of the show is undoubtedly Priscilla herself, a feat of theatre engineering, more candle power than horsepower. This Priscilla is less a vehicle than a multi-coloured, wheeled light show designed to take the breath away. 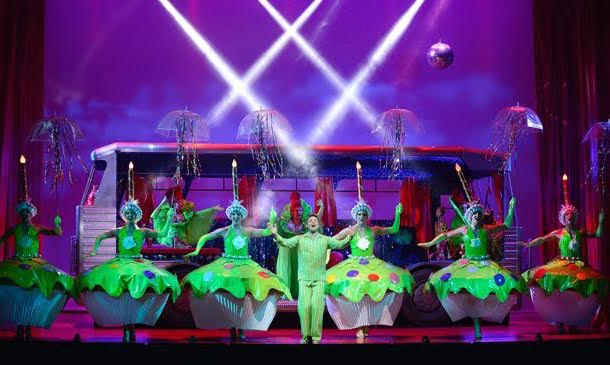 Other highlights are Julie Yammanee who gets close to stealing the show as Cynthia, a Thai mail order bride, whose bar room song culminates in a ping pong ball being catapulted from her posterior, and the equally flamboyant and masochistic exhibitionist Felicia, Adam’s alter ego.

It’s eye-poppingly extravagant. All glitz, glamour, sequins and big shoes but there seems something defiantly tasteless that the fulfilment of a drag queen’s dream is to do a Kylie medley on top of the sacred Ayers Rock.

When the focus is on the old queen transsexual Bernadette, it does manage to bring sympathy for the plucky outsider’s lonely life as does Tick’s meeting with the young son he has never seen in a heartrending delivery by Duncan James of Elvis Presley’s Always On My Mind.

Despite its lack of depth, what I will remember most about the show are the over the top effects, a stream of camp jokes, human cupcakes and paintbrushes

The superb choreography by Andrew Hallsworth, with direction by Simon Phillips, will appeal to many and the audience certainly lapped it up and went home happy after a barnstorming animal-themed closing number. A mention must also go to Tim Chappel & Lizzie Gardner for the superb award winning costumes.

Whether that will be enough to overcome the lack of a limited of a plot that is a watered-down version of the movie only time will tell. However, it’s a great way to celebrate Pride.

Showing at the Opera House until 29th August