Vivienne Franzmann’s hard hitting play was commissioned in 2014 and played at the Royal Court and the Royal Exchange to mixed reviews.

I can see why. This is a difficult play to enjoy as you get right into the heads of the two characters. But there is something refreshing about seeing two female protagonists living life by their own rules. Or are they?

Pink (Liz Simmons) and Rolly (Stacey Harcourt) are sisters who have been to hell and back. They are trapped and defined by their past. They have been in care and have been exposed to violence, abuse, prison, and the feeling that they are not wanted by family or society. All they have is each other.

Rolly goes for a job as a cleaner at a hotel and is so upbeat at the thought of finally becoming someone that you root for her to succeed. Pink has humour and a streetwise instinct for survival, but beneath this facade she has always questioned why her sister was wanted by her carers but she was not.

For the first hour Pests is a totally engaging piece. It is claustrophobic and you really get underneath the skin of these two neglected characters. 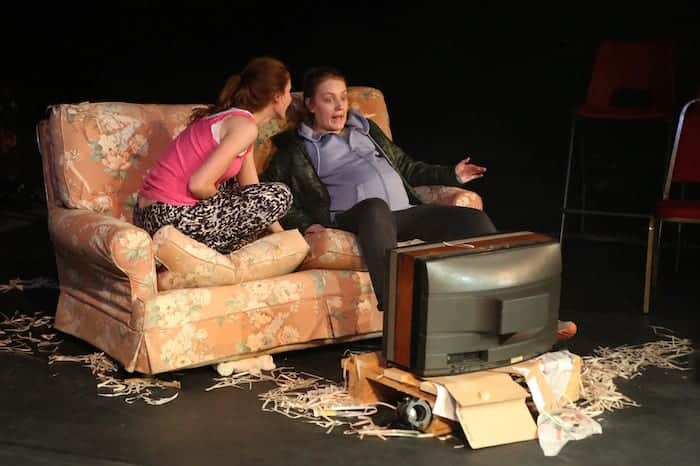 The piece was devised by Clean Break, a women’s theatre company set up by two female prisoners, so it is incredibly authentic.

The writing has an edgy quality and you hope that these two will escape from this ‘prison’, but as you walk through the streets of Manchester and spot homeless people at every turn, you are fully aware that the fate of these ‘invisible’ people is being ignored by those in power.

There is humour here, so it is not grim throughout and the performances have an earthy quality which reminds you of turns you have seen in Mike Leigh and Ken Loach films. Liz Simmons is fiery, controlling and ferociously funny as the fractured and complex Pink.

She wants her sister by her side but these two have fought for what little attention they receive, so their love is as damaged and as dirty as their home. Simmons imbues this character with a sense of dog eat dog and you forgive much of what she does, but there comes a point when you know she will hit self-destruct. 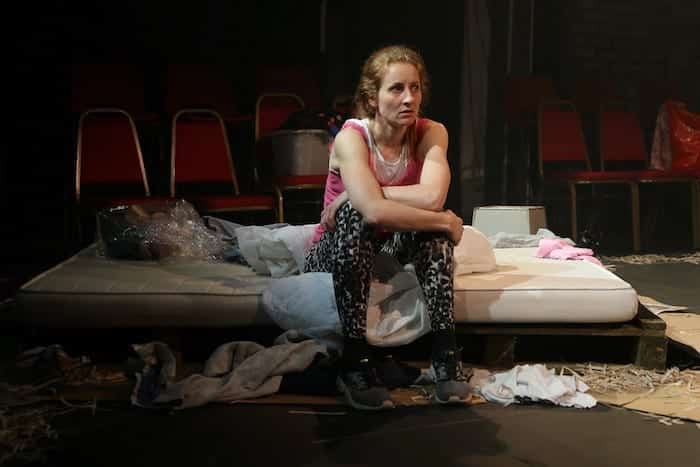 Stacey Harcourt’s Rolly is more subdued and dependent on approval from others and there is a sweetness about her which draws you to her. But, like a cute cat sat on a couch, these two bite and their lives are so unpredictable that you find yourself torn between loving them and judging them, just like society.

They are far more than victims. They have learned to survive by whatever means they can, and others get hurt as a result.

Franzmann’s writing is not always as consistent as you would like. Pink quotes books and popular culture constantly, yet you never see her read. So she feels slightly unrealistic as a character at times, but what grounds her is Simmons superb delivery, as she never misses a beat.

Also, it does not quite know when to end. And due to lighting effects when we almost fade to black, there are several occasions when you think the play is over, and it starts up again.

Kim Burnett directs the piece with a real eye for detail and she ensures that you focus on the good, bad and the downright ugly lives that these two lead. She does not feel the need to sanitise that.

12 Miles North have produced a stunning production of a play which is not perfect but in which they have invested so much love, passion and talent that you end up becoming immersed.

They invite you to look beyond the weather beaten face that you walk past in the street and see the person.

Pests is at the Hope Mill Theatre until 29th June.