REVIEW | Lord of the Flies at The Lowry Theatre 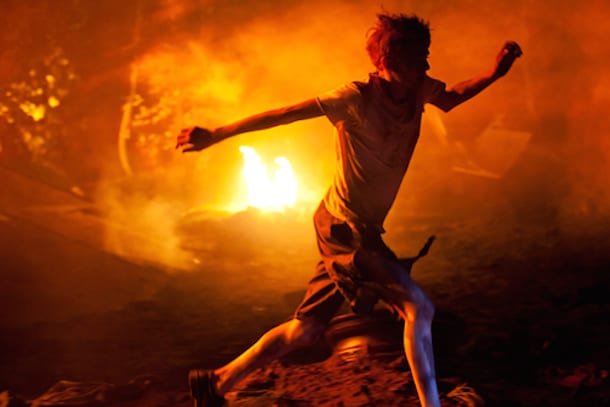 An explosive production featuring plenty of action, fire, dramatic music, sacrificial dancing and school boy antics, Lord of the Flies at The Lowry Theatre is a refreshing and upbeat adaptation of the novel . Infused with lashings of action, emotion and humour, this inventive performance is enthralling viewing for everyone and may just leave you with food for thought, says Jemima Forbes…

William Golding’s controversial 1954 novel tells the story of a group of British schoolboys who are marooned alone on an island following a catastrophic plane crash and their efforts to create a civil community that ultimately has disastrous consequences.

“A bold interpretation
of the classic novel, this
version has been updated
for a contemporary
audience but don’t let
that put you off.”

The impressive production gracing The Lowry for five nights this week comes straight from the award-winning Regents Park Theatre in London and is directed by prolific theatre and television producer, Nigel Williams. A bold interpretation of the classic novel, Williams’ version has been updated for a contemporary audience with references to selfies, 3G signals and Bear Grylls as well as the occasional impromptu Miley Cyrus song outburst. But don’t let that put you off.

As in the novel, the narrative focuses around the power struggle between Ralph, a plucky boy from Plymouth, and Jack, a privileged choir boy and school prefect, as they battle against each other for the role of chief. The boys begin to take sides and their differing priorities for survival and rescue consistently get in the way of harmonious living.

As in the book, the illustrious ‘conch’ (a giant seashell that can be used as horn) is used as a symbol and instrument of law and order yet also seems to be the cause of much of the pain and suffering.

The young cast did well on the opening night, portraying their characters well and adding the necessary layers of complexity and emotion to their performances. They also injected the play with some much needed humour – Maurice’s witty jests, identical twins Eric and Sam speaking in unison, and little Perceval’s naïve antics are light hearted moments which help counterbalance the darker themes of the play.

The nastier aspects of some of the boys’ characters is shocking at times, with casual insults about others’ origins, wealth and mental state forming a large part of the boys’ conversations. You couldn’t help but root for the eager-to-please and good-hearted, Ralph or pity the bullied Piggy, notably the only character from the north.

The set design is incredible, the detailed plane wreckage creating a keen sense of catastrophe which contrasts well with the idyllic white sandy beaches and palms of the island. Rather than the set changing from scene to scene, this is done in a rather more creative and unusual way. Instead of blackouts and multiple sets that spin around on a central wheel, the different parts of the island (as well as different interactions happening between the cast) are distinguished through elevated stage areas, the freezing of characters not in the scene, and clever lighting. The characters move in slow motion to exaggerate the chaos and conflict in some scenes, and the dramatic choir music exemplifies the eerie loss of humanity as the boys give in to their animal instincts.

The second half of the performance was not quite as gripping as the first, perhaps due to the changed atmosphere on the island as the boys delve deeper into their lives of chaotic destruction. There is no reprieve through humour and it is often overly intense viewing. The final scene is nevertheless one of the most poignant with a shift of sentiment as reality abruptly sets in. Overall, it was well thought out, well performed and well designed. The boys’ descent into confusion and suspicion is portrayed not only through their behaviour and speech but visually though their physical appearance. Starting the play in impeccably neat school uniforms, the boys go through a whole array of subtle and effective costume changes as their outfits become tatty and ripped and their faces dirty.

While the play may have been visually stunning and a deep appreciation can definitely be felt for the young cast’s acting abilities, it does force you to contemplate what ultimately separates supposedly civilised human beings from savages.

Leaving the theatre was a slight relief – testament to the play’s success in immersing the audience in the sordid action and emotion of the narrative. I was also left with a rather catchy, though cruel, chant in my head for hours afterwards – something audiences should be warned about in advance.

Lord of the Flies is playing at The Lowry Theatre until Saturday 5th December.