REVIEW: Little Shop of Horrors at the Palace Theatre 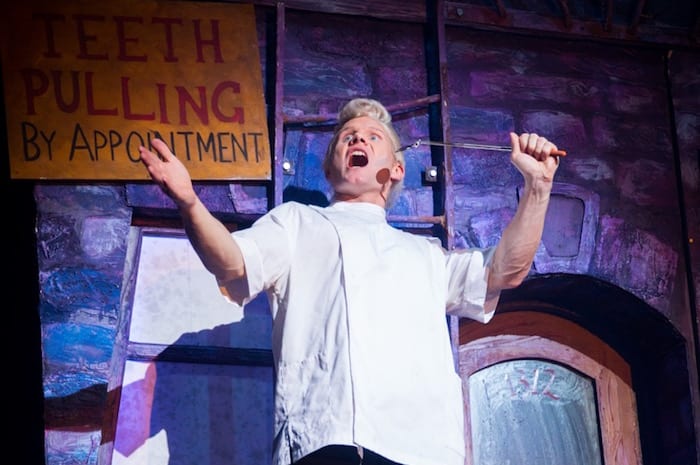 Of all the theatres in Manchester, the Palace is special to me. It may feature fewer shows per season than the Opera House and it lacks the theatre-in-the-round of the Royal Exchange, but it has a classical feel, a timelessness that other theatres seem to lack, and I’ve never once left disappointed.

The Palace is currently playing host to Little Shop of Horrors, a stage musical that you may remember as a film from the eighties. And, yet again, I wasn’t disappointed. The show runs for three hours and if one word sums up the experience then it would be impressive.

In case you’re not familiar with the film, it’s a charming, kooky and hilarious 1950s musical comedy which tells the story of Seymour, the assistant at Mushnik’s Flower Shop in downtrodden Skid Row, who becomes an overnight sensation when he discovers a strange and exotic plant. He names it Audrey Two in order to impress glamorous Audrey, the shop assistant he’s secretly in love with. But Audrey Two has a mind of its own, and soon grows into a bad-tempered, foul-mouthed carnivore with an appetite that can’t be satisfied. Seymour must keep the meals coming to stop his prized plant from wilting, but how far is he willing to go to get the girl of his dreams?

Although it features an ensemble cast and four or five set pieces, there wasn’t so much as a moment’s boredom. It’s a masterclass in fun, campy, not-too-serious theatre and Tara Louise Wilkinson, the show’s director, deserves  credit not only for putting the show together but for so faithfully recreating a beloved movie of my youth. 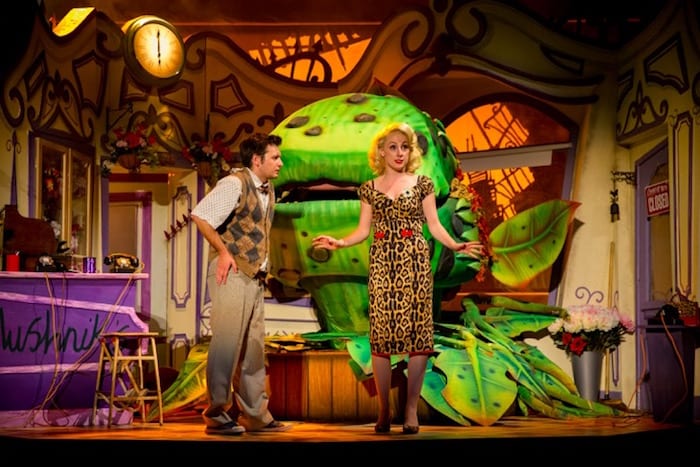 Also deserving credit are Stephanie Clift who gave a stellar performance as Audrey after recovering from a few accent-based slips in the first half to carry the entire show through to the end.

Also deserving of praise is Sam Lupton who gave a wholehearted and energetic performance as the luckless Seymour.

But the bedrock of the entire show can be found in the singers – Sasha Latoya, Vanessa Fisher and Cassie Clare as the Doo Wop Trio.

Although not key to the plot, the vocalists’ obvious talents had the audience laughing and cheering from the opening musical number. Another pleasant surprise was Rhydian Roberts, runner-up in The X Factor 2007 and a guy who’ll make you say ‘Oh yeah, I forgot about him’ the moment he steps on stage.

He is clearly a fantastic singer, with an incredible range and impressive projection and, despite not being the strongest actor on stage, deserves his place amongst the cast. After all, the man has spent a lifetime training his voice. It would be unfair if he was a world class actor as well.

There are moments that transcend good and begin to approach genius territory. The constant newspaper headlines at the stage’s bottom right point a wry finger at the plot itself, cracking out puns and signposting the direction to be taken, and the inclusion of the Skid Row Music Shop, which contains the band playing the performance’s score, was a particularly sharp move on the part of designer David Shields.

Little Shop of Horrors is another feather in the Palace’s cap. It’s fun and family friendly while also being legitimately enjoyable for any adults wanting a night out without the kids.