REVIEW | How Did They Do That? Impossible at the Palace Theatre 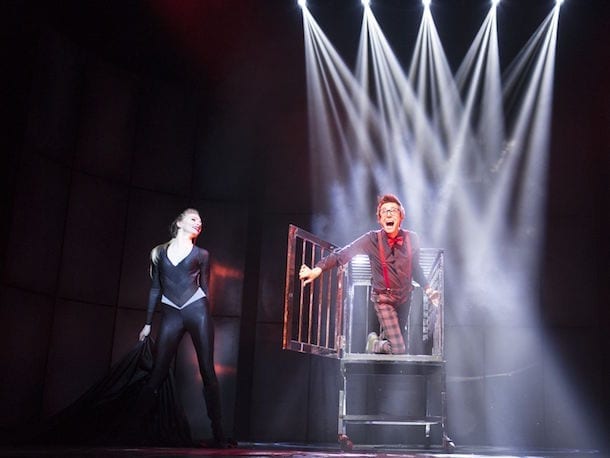 Impossible takes you on a dramatic ride through the history of magic, beginning in the time of suspicion and witchcraft and ending with some contemporary street magic with a little break dancing thrown in, says Jemima Forbes
Share
Tweet
Share
Chat

“…it’s probably
best to avoid
sitting in the
front few rows
as the show is
heavily audience
interactive.”

Magic shows now seem very few and far between so when Impossible hit the Palace Theatre on the Manchester leg of its UK tour, it was a show not to be missed. With performers you may have seen on TV programmes like Killer Magic and The Jonathan Ross Show, Impossible is a spell binding and exhilarating celebration of ancient and contemporary magic.

Filled with cards tricks, street magic, mind reading, daredevil stunts and illusions, Impossible is a true spectacle that attempts to prove the limits of possibility by recreating some of the most famous tricks ever created and performed.

Accompanied by an atmospheric voiceover and some detailed set design, the six performers appear on stage in rotation to perform tricks from different stages in history. Each has their own speciality, from the talented Magical Bones with his fusion of dance and smooth street magic, Houdini-inspired escape artist and stuntman Jonathon Goodwin, goddess of illusion Josephine Lee to the “mind reader who can’t read minds” Chris Cox, Impossible has a trick to impress even the most dubious of watchers.

If the very thought of being dragged up on stage to participate in a trick fills you with horror, it’s probably best to avoid sitting in the front few rows as the show is heavily audience interactive.

At one point a lady was asked to select a seat blindly from a chart and the apprehension in the entire theatre is palpable as everyone realises that no one is safe from the stage. The audience participation made for some heart wrenching (okay, maybe just entertaining) moments of embarrassment for the selected few as they shuffled up on stage and stood on stage.

A gripping show for all ages, there isn’t a moment of dullness throughout with the comedic presenting, dramatic music, and the odd dose of danger keeping you on tenterhooks.

Some parts of the show may have been a little cringeworthy with some bawdy jokes and over the top showmanship but it was certainly entertaining and garnered more than its fair share of laughs and gasps.

The simpler performances such as the cheeky Ben Hart’s juggling and rope tricks, and Lee Thompson’s amusing pickpocketing routine reminded us that magic doesn’t have to be loud and extravagant to be extraordinary.

The stunts and tricks shown were not really anything new if you’ve ever watched magic shows on TV or heist films but there were certainly a few stunners that left you wandering for days afterwards “How did they do it?” We won’t give too much away though, that would just spoil the magic.

Judging by the lack of empty seats and applause at curtain close on its opening night in Manchester, it was a sell-out show. Impossible is currently touring the UK and Europe so keep an eye out on their site for future dates.