REVIEW | Guys and Dolls at The Palace Theatre

The footsteps of Richard Eyre’s wonderful production of the early eighties... 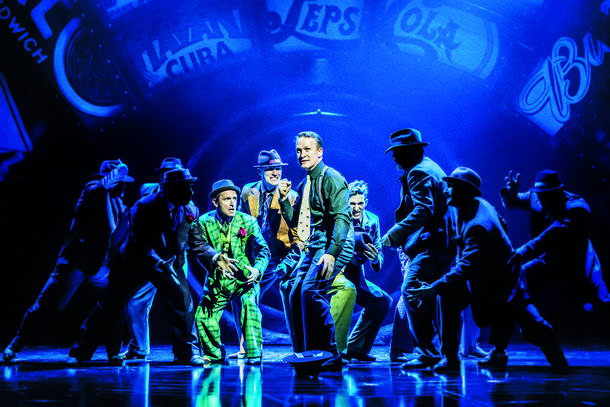 Now playing at The Palace Theatre before heading off to the West End next summer, this new production by the American director Gordon Greenberg follows in the footsteps of Richard Eyre’s wonderful production of the early eighties but falls some way short in emulating that theatrical triumph.

“Among the
supporting cast
look out for
Nic Greenshields,
only marginally
shorter than the
Beetham Tower”

It follows closely the book by Abe Burrows and fizzes along telling the story of Sarah and Sky which is the main crux of Guys and Dolls, in a love story in which everything Sky does is for or with Sarah.

In Jamie Parker’s Sky and Siobhan Harrison’s Sarah, Greenberg has the perfect duo around whom he can anchor his production.

Parker plays the suave, debonair cocky gambler; the man who can drink and laugh with the boys, dance with and charm the ladies, tell a great story. He is what most men want to be and with whom women want to be.

He belts out his tunes with gusto and self assurance, particularly his rendition of ‘Luck Be A Lady Tonight’ which resonates with pleasure and passion in Parker’s interpretation, and the sense that everything really is riding on the one throw of the dice is palpable and exciting.

He is gifted enough to have the ability to display the chinks in Sky’s armour – his surprise at being attracted to Sarah on a one woman basis, his disbelief that his advances, albeit drunken ones, are rejected, his pain at having failed her and, finally, his all-consuming joy and pleasure at becoming her husband.

Harrison is delightful as Sarah and helps make Parker’s Sky equally believable as a couple. She encapsulates the opposites of Sky: tense, buttoned-down, insular, brisk if not brittle, determined to save the souls of others without thinking about her own self. Harrison shows all this but manages to make Sarah endearing from the outset. That’s quite a trick.

She touchingly captures her character’s sense of hurt and betrayal before the final glow of love and confidence, and once she takes the shackles off as the staid missionary, enchants the audience in the Havana scene as too much drink takes hold. Sadly, after this rousing number she slips back into her missionary role, looking very much like she wants another hell raising song to get her out of her malaise.

Sadly, however, the show meanders along in a laboured way despite a superb performance by Sophie Thompson as Miss Adelaide. Together with David Haig as Nathan Detroit, she recreates their on screen partnership from the classic film Four Weddings & a Funeral as a long time engaged couple with Detroit doing everything in his power to stay a single man at large. So take a bow Sophie Thompson who, without doubt, steals the show and duly saves it.

The brightest moments include one when, in conversation with Sarah, the concept of “chemistry” between two people is mentioned. Sky freezes, holds the moment, and looks directly at the breathless Sarah. The silence speaks more about the instinctive feeling each has for the other but is trying to ignore than any amount of dialogue.

Later, when the same frisson occurs again, the next time “chemistry” is mentioned, you could fry an egg on the sizzling tension emanating from the pair. Great stuff.

Among the supporting cast look out (though you could hardly miss him) for Nic Greenshields, only marginally shorter than the Beetham Tower, and an absolute hoot as the sinister heavy, Big Jule and the hilarious Gavin Spokes as Nicely-Nicely Johnson.

The nightclub number Take Back Your Mink becomes an evocative cabaret striptease reminiscent of those Berlin days, and the rapturous Pentecostal-style song ‘Sit Down You’re Rockin’ the Boat”, is performed with gusto by Gavin Spokes who combines an uncanny physical similarity to a young Oliver Hardy but without the moustache with a parody of comic timing.

On the flip side, however, the Havana scene has no trace of the smoky, sensual, intoxicating atmosphere and the touch of exotic frenzy that there needs to be and the opening salvo to the sewer scene lacks cohesion. The set by Peter McKintosh is efficient and in keeping with the production, but is rather cumbersome and not nearly colourful enough. The opening shoe shine stall proved to be an inspired design choice, creating the hustle and bustle of Broadway.

As is often the case in the ambience of the Palace Theatre, the music, under Gareth Valentine’s supervision, is excellent and played superbly with a profoundly brassy emphasis. The choreography, however, is not particularly inventive or interesting.

Guys and Dolls is not foolproof. It can be done very badly. This was marginally one of those occasions and left me somewhat flat as I left the theatre. You can always tell a rousing feel–good production by the volume of applause at the fall of the curtain. I counted a few brave enough to stand and applaud. That said it all to me.

Playing at The Palace Theatre until November 21st

Get your tickets here: www.atgtickets.com/shows/guys-and-dolls/palace-theatre-manchester