Homeopathic tequila and pearl necklaces. Just two of the things this year's Flying Solo Festival at the Contact Theatre is all about 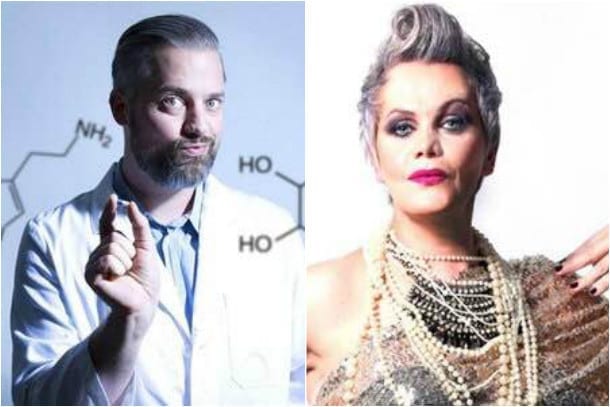 The Flying Solo Festival is a celebration of what happens when performers go it alone, with over half a dozen different performers over the course of the season.

If you’re the sort of
person whose
sphincter tightens at
the thought of
audience participation,
this is probably not
the show for you.

I saw Ben Mellor’s Kiss It Better, an exploration of the placebo effect, and Kate O’Donnell’s Big Girl’s Blouse, two very different pieces by two very different performers. Across the landing from each other, you can comfortably fit both into the evening with time for a drink in between.

My interest was piqued by Kiss It Better before it even started, being handed a brief questionnaire with questions such as “Is it ethical to give a placebo treatment to a patient without their knowledge?” The show is part history of medicine, part poetry, part comedy and part musical landscape. What a combo. If you’re the sort of person whose sphincter tightens at the thought of audience participation and interacting with your neighbour, this is probably not the show for you.

The show challenges conceptions about the placebo effect. What is it? Why is it important? Can it really be the triumph of expectation over reality? I’m not sure, but it certainly got me thinking.

Ben Mellor is self-deprecating, warning you at the outset that there is no actual entertainment, “although some of you will go away feeling entertained.” I think I was entertained. Or maybe it was the placebo effect in full force. Who knows? Want to know how to make homeopathic tequila and see how shamanistic bloodletting techniques involving eagle down worked? Well, you’ll just have to go yourself and find out.

And now time for something completely different.Big Girl’s Blouse is a one woman show, written and performed by Kate O’Donnell, about the struggles she experienced as a transgender kid in the 1970s, up to the present day as a 50-year-old trans woman. Originally developed as a Contact Theatre commission, this show has been touring for over a year and is now back in Manchester.

The transition from little boy to gay man to drag queen to transgender woman is looked at through the lens of a series of pivotal autobiographical moments. Despite Kate being resplendent in sequins and a headdress that could have been pooped out by Christmas, it’s not all happiness and sparkles. “There was a war on, a gender war,” she says. If the show had to be summed up in one word, though, that word would most certainly have to be ‘fabulous.’

While making you reflect on the struggles she has experienced over the decades, the emphasis is firmly on the humorous side: “I’ve always been a bit of a slave to a statement necklace” quips Kate, sporting an oversized pearl necklace-esque creation.

At times the show feels like a party political broadcast for the #StandByYourTrans Twitter campaign. Frankly, I don’t have a problem with that. And if you do, perhaps you need a little more glitter in your life.

Friday 13th and Saturday 14th May