Review: Cilla – The Musical at The Lowry 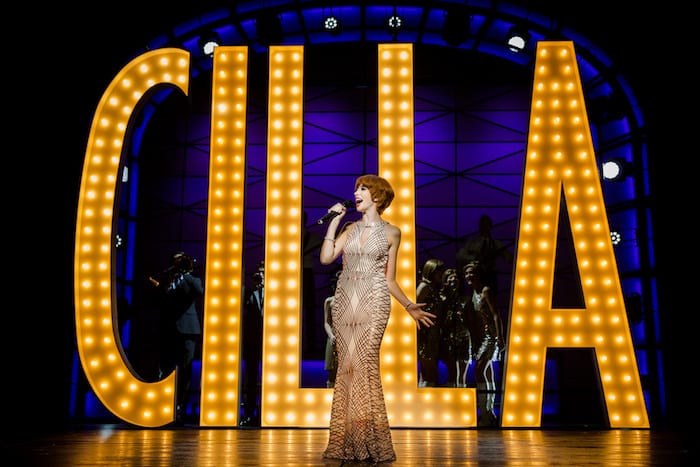 Four years ago, a brilliant drama about Cilla Black appeared on ITV with Sheridan Smith giving a superb performance.

It received rave reviews and a big audience.

On the back of it, there was renewed interest in the lovable scouser and her brilliant career. One year later, our Cilla was dead. A statue was recently erected outside the famous Cavern Club where she went from cloakroom attendant to singing superstar.

It’s a really inspiring story so it’s no surprise surprise that the ITV drama has now been adapted for the stage.

There have been many musicals based around a singer’s life and back catalogue and many of them fall into the trap of trying to fit the songs into a pre-existing narrative.

Director Bill Kenwright realises that the target audience for this show know that Cilla was a great performer and an entertainer. So most of the songs are performed with a mic and an audience. These ‘live’ sections work really well, with the youthful cast filling the stage with energy, swigging from bottles of coke, hair lacquered, ready to party.

In the main, this is a celebration of Cilla Black, focusing on her engaging personality, her success, and how she connected with the public. But it also explores the diva moments, when she became focused on her career and what to do next at the expense of her beloved husband, Bobby, who became her man in waiting.

Writer Jeff Pope is unafraid to portray Cilla’s flaws, but as this is a feelgood show we move  through them as she sings her greatest hits. Just in case Cilla was never really on your radar, you learn about her humble upbringing, the recordings at Abbey Road studios with George Martin, and her relationship with her manager Brian Epstein, who also famously managed The Beatles.

At times there are almost too many narrative strands and I wanted more of Brian Epstein. Andrew Lancel (who has played him before in the play, Epstein – the Man Who Made the Beatles) gets right underneath the skin of this enigmatic, yet deeply damaged man. The Beatles also feature but at times it feels like just an excuse to play their hits rather than move the narrative forward.

But there is something about Cilla’s story which keeps you interested throughout this marvellous musical. She became the nation’s sweetheart for so many decades because she was like the people buying her music and tuning into her TV shows.

Kara Lily Hayworth embodies everything you loved about Cilla Black and then some. Her rendition of Anyone Who Had a Heart gives you goose bumps. And she captures the star’s likeability and cheekiness without being too twee.

The first half of the show is better than the first, as her rise to fame is far more interesting than what came after. And there are a few jukebox musical moments when characters sing songs to reflect their state of mind which does not always work well.

Ending with the entire cast singing Through The Years does feel a bit like a We Are The World-style fundraiser and is just too safe to leave you with a smile on your face or make your feet tap.

But Cilla – The Musical has three wonderful leads. Kara Lily Hayworth takes the role and makes it her own without overdoing it. Alexander Patmore portrays Bobby’s undying love and respect for his wife and artist with ease. And Andrew Lancel gives far more than is on the page and makes you feel for Epstein.

Add to all this Gary McCann’s grand set design which captures the spirit of the Cavern Club, a superb supporting cast, a team of magnificent musicians, and some great tunes, and you are in for a lorra lorra fun.