Review: Calendar Girls the Musical at The Lowry 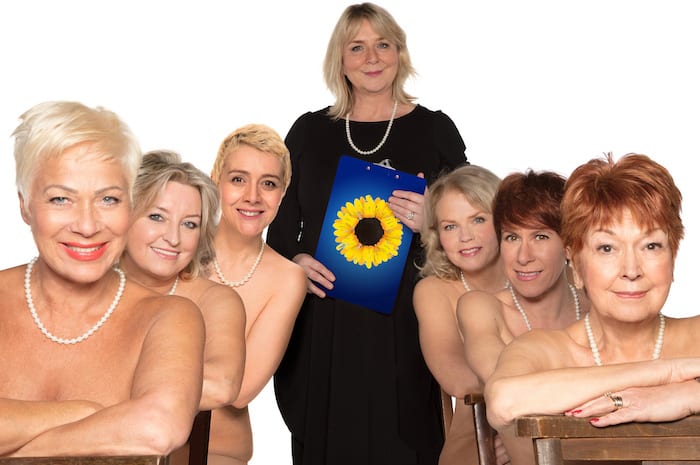 The true story of a group of Yorkshire women who bared all for a WI calendar to raise money for their local hospital has been made into a film featuring Julie Walters and Helen Mirren and a play which has toured the UK and played the West End.

A few years ago, Gary Barlow met with the original writer Tim Firth to create a musical version. This is the second tour, following a well-received West End run.

When I first heard this was happening, I thought cynically that you could add nothing to this well-known story. But I saw the show in London and I was wrong because Barlow and Firth’s songs are bloody brilliant. And they do bring poignancy and comedy to a piece that you know, but not like this.

Annie (the brilliant Anna-Jane Casey) is accompanying her husband John to hospital appointments and is filled with hope and optimism. But quite quickly his diagnosis becomes quite bleak. And this is where the excellent double act of the Take That lead singer and one-time Willy Russell collaborator kick in. The beautiful Very Slightly Almost, a sad song that takes you on a journey, is reminiscent of the late Victoria Wood at her finest. Anna Jane Casey’s delivery is brilliant as she acts and sings it into a storm of heartache.

And there are other moments like this when you really feel Annie’s pain because she must face ‘doing it alone.’ Whether it’s changing the duvet, doing the weekly shop, reaching for objects in the house which are high up, everything that once felt mundane, has her husband’s imprint. This exploration of grief before it hits you, when someone close to you has a limited life span, is beautifully done.

But the show is far from maudlin. It’s incredibly uplifting and very funny. The lines you remember from the movie version and play are all here, including “You’ll need considerably bigger buns” during the famous calendar shoot. And the cast and brilliant writing stops the show from becoming overly sentimental.

Rebecca Storm is a scream as Chris, bringing a sense of playfulness and living her best life, inspired by Annie’s husband (played with wide-eyed optimism by Phil Corbitt) and she works incredibly with Anna Jane-Casey as their chemistry feels genuine.

TV and theatre stalwart Ruth Madoc is also excellent and has great comic timing as retired teacher Jessie, about to drop everything bar her knitting. Denise Welch sends herself up, as Celia the surgically enhanced golf wife, who is unapologetic and incredibly supportive to her friends in the WI.

Sara Crowe as Ruth brings comedy and vulnerability and her song My Russian Friend and I has a great reveal tinged with laughter mixed with sadness. Tyler Dobbs, Isabel Caswell and Danny Howker play the teens in the village and all hold their own, bringing their own insecurities to this brilliant musical.

Matt Ryan’s direction is smooth and the piece rattles along in the first half to lead you smiling into the interval. The second half does feel slightly dragged out, as there is not much narrative left to explore. But songs such as the crowdpleaser Sunflower keep lifting your spirits.

Robert Jones’ set design captures Yorkshire to a tee, making you want to visit the place, and Jos Houben’s comedy staging of the calendar shoot is inspired.

Calendar Girls continues to inspire and keep audiences coming back because it features ordinary women doing something quite extraordinary. And, in the words of Ruth Madoc’s Jessie, it features “no front bottoms.”

Instead, you are treated to a moving and upbeat evening led with aplomb by superb Salford born songstress and acting dynamo, Anna Jane Casey.

Save the date and book before the run is over.

Calendar Girls the Musical is at The Lowry until 10th November 2018.