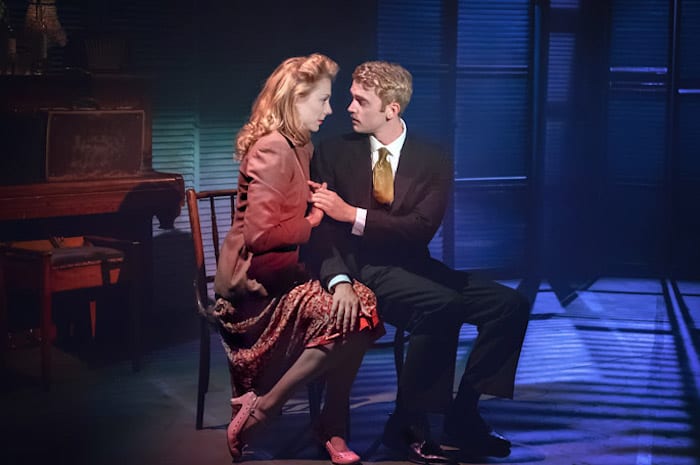 While England were getting knocked out of the World Cup, I was watching some knock out performances in a revival of Andrew Lloyd Webber’s Aspects of Love.

For fans of his previous hits, Starlight Express, Cats, Phantom and Sunset Boulevard, there is much to enjoy here, particularly the familiar use of repeated melodies. I was reminded of Evita as some of the songs would not feel out of place in that brilliant show.

But the set-up reminds you more of the work of Stephen Sondheim. It looks at relationships, and the music gives you a chance to study these characters and see what makes them tick.

With Don Black’s lyrics, and the fact that many of the characters do not elicit much sympathy, I was also reminded of Lloyd Webber and Black’s much maligned Stephen Ward, which explored the Profumo affair, and the sandal that ensued.

Here we follow Alex (Felix Mosse), a young soldier, who is not looking for love but finds it in the guise of the erratically behaving actress, Rose (played with aplomb by Kelly Price).

You might be thinking, typical musical. Sweeping melodies and happy every after. But this show also explores infidelity, incest, and the idea that love does not change everything, if someone else offers you more than the previous person. The problem is, that the first half hops around from different situations so rapidly, that you do not really care about anyone. And characters act as if they are taking part in the old children’s show, Mike Reid’s Runaround, jumping from one mindless game to another, in search of an answer.

Hope Mill provides the perfect space, and this is a beautiful show to look at and admire. Jason Denvir’s set, consisting of a series of shutters, is perfect, as it can instantly change from a café to a home filled with opulence. Sam Spencer-Lane’s excellent choreography suits the interchangeable relationships we see before us.

Jonathan O’Boyle’s direction allows the actors to shine, and they do this, despite the sheer clumsy earnestness of the material they are working with.

Kelly Price is quite something. She has the allure of the actress who wants to be admired, but also captures the desperation of a woman who does not want to be alone.

Felix Mosse is also excellent, with his wry smiles and slow burning vocals.

I loved the fact that he gives his songs time to build, meaning the emotional impact stays with you.

Kimberley Blake does well with an underwritten role, and Eleanor Walsh as Jenny reminds you of a young Sarah Brightman, another object of Alex’s affection, who is forbidden fruit due to her age and the fact that she is family.

Lacking the Bohemian feel of other musicals such as Rent, Hair and Moulin Rouge means that it is very difficult to feel anything for the characters, as they sing their concerns directly to you.

There is too much wanting to have their cake and eat it here, for you to feel any level of sympathy or empathy.

They end up coming across as Brexiteers who want out of Europe, but have moved to Spain, not speaking English and moaning that people at home do not integrate.

Even Jules et Jim or The Talented Mr Ripley have enough humour to lift any self-indulgent parts.

The production is finely tuned and exquisite to look at, and the performances lift the piece as high as it can go.The problem is the source material is just not as engaging or sexy as it thinks it is.

If some scenes were cut, it could have a sense of urgency. But it’s a hard show to fall in love with compared with other musicals.

Aspects of Love is at Hope Mill Theatre until 9 August.