Review: An Officer and a Gentleman at the Opera House 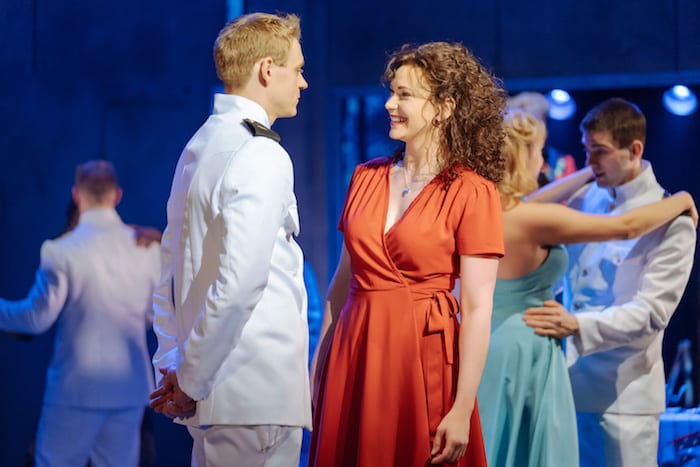 Flashdance, Footloose, and Fame. Three movies which saw queues outside cinemas back in the 1980s which have been adapted into stage musicals, reminding us of the days of big hair and legwarmers – and some great hit songs.

An Officer and a Gentleman is another. It has key moments which back in the day would have been paused on VHS or Betamax video players across the land, especially the finale, when Richard Gere arrives in Debra Winger’s place of work and lifts her up to applause from her fellow factory workers.

As well as the theme tune by Joe Cocker and Jennifer Warnes, there were a few soft rock numbers on the soundtrack. So here is a ‘put a another dime in the jukebox, baby’ show in which we hear the likes of Heart, Madonna, and Blondie reinterpreted to fit the narrative of a wayward soldier who needs the love of a good woman, and his girlfriend, a civvy stuck in a factory, which is crushing her dreams.

Think of it as Cinderella but with an angst-ridden prince who has chosen the navy as a way to fight his demons. Cue the Status Quo hit In The Army Now renamed In The Navy Now. It works well as a defiant cry by the soldiers as they embark on their gruelling training regime, led by ‘accept no bullshit’ leader, Emil Foley (played with genuine fire by Ray Shell).

So far, so good. No one can doubt the commitment of a tremendous cast who lift movie clichés and the dated aspects of the film to greater heights – so much so that you accept casual sexism and homophobia in the dialogue. They deliver with such conviction that you just see it as a period piece.

Jonny Fines brings depth to his ‘angry young man’ with the surname Mayo. He does so with relish and fries, bringing inner pain, even when it’s not in the original song he is singing or the lyrics.

Emma Williams can play the part of Mayo’s girlfriend in her sleep, and she too hits the heights vocally. But often the songs are cut off when she is in her prime.

James Darch is completely understated as troubled best friend Sid and really impressive, particularly when he sings Hall and Oates’ Family Man. And Keisha Atwell’s Casey is the wall flower who grows into a sunflower, embracing this underwritten role and running with it.

Some of the hits are given a fresh lick of paint – but I wish this was more consistent.

For example, Madonna’s Material Girl slowed down works almost as a torch song about Paula’s best friend and her priorities. But once Jessica Daley has to speed the song up, you see Madonna walking down the stairs, adorned with diamonds, and it takes you out of the show. Europe’s The Final Countdown does this too.

And why you would include songs from other films (Rocky IV and St Elmo’s Fire) is beyond me. It’s like randomly flicking the channel on your TV. You can’t settle into the song and feel the emotion as you think about the film the song is from.

In Mamma Mia, Here We Go Again, Meryl Streep sings the brilliant Abba song My Love, My Life and makes the song her own because she allows the song to breathe and it becomes the narrative. She acts the socks off it, moving you to tears.

Here, we move from song to song at speed like a three year-old with a Spotify account.

Ultimately, though, An Officer and a Gentleman is worth seeing for a couple of reasons. The cast are supremely talented and they engage you every step of the way. And if you love the film, your favourite scenes are all here, intact.

And because Fines and Williams are great leads, you can forget Gere and Winger. But this is still a case of all the Gere but no idea, so let’s Winger it by inserting as many random songs as we can, until the audience feel they have been drilled into liking it.

An Officer and a Gentleman is at the Opera House until 18th August.