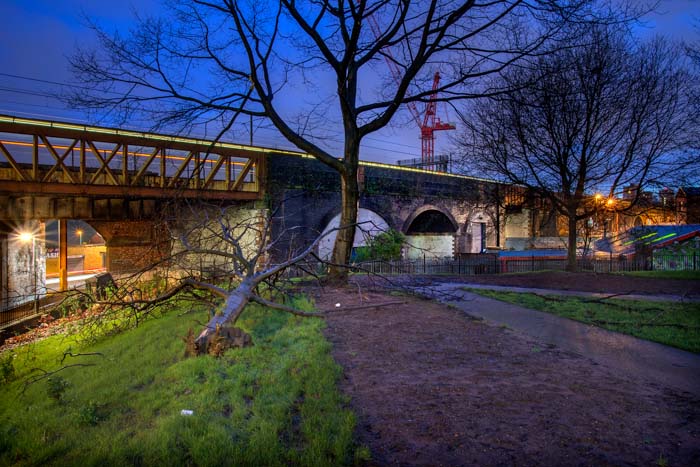 For the last 15 months, local artist Simon Buckley has been photographing the northern and eastern edges of the city centre at dawn for his Not Quite Light project. Over the first weekend of April (1-3) 2016, he’s staging an exhibition and a series of events which explore the social history of the city through a range of talks, photography courses, walking tours and collaborations
Share
Tweet
Share
Chat

Getting up at the crack of dawn is not something most people relish. But Simon Buckley has spent the last 15 months getting up even earlier to take photographs for Not Quite Light.

“Heritage is
more than
just bricks
and mortar;
it’s a state
of mind.”

The photographs capture the essence of the northern and eastern edge of the city centre in the half-light. Many of them contrast the newer parts of Manchester with those places which have yet to be redeveloped.

Not Quite Light started in January 2015 when Simon was living in the Northern Quarter and used to go out with his flatmate to walk his dog around Angel Meadow and the surrounding streets.

“We talked about old Manchester, and how it was changing. One evening I was looking at the lights of the CIS building glowing down onto St.Michael’s Flags, where 40,000 bodies are buried, and thought, ‘If that light could bring back to life the Mancunians below, what would they make of what we’d do done with their city?’

“And that’s what set me off. I photographed at dawn as a metaphor for transition, of the old into the new. I had no clear ambition for the project at first, but it seems to have really taken off.”

Since then, he’s been getting up two or three times a week when most of us are still tucked up in bed.  At the moment he’s getting up at around 4.30am. In June he doesn’t bother going to bed.

Has he ever thought ‘Nah, not today’ when the alarm clock goes off and gone back to sleep?

“Rarely. I hate the getting up but I’ve hardly ever regretted getting up. It’s such a magical time that the soul is nearly always rewarded by making the effort. I’ve sometimes overslept, but that’s not quite the same and I feel pretty cross at myself when that happens.

“When it’s bitterly cold, and the rain is coming down, it can feel a real challenge to get up and out. But there’s always beauty to be found if you look for it.”

Being out and about on the city streets in the early hours of the morning is something which some might consider to be not without its risks, but Simon says he has rarely felt unsafe, ‘apart from once outside a bar in Stevenson Square at about three in the morning’ – and he’s met some interesting characters.

“That same night I encountered a character calling himself Zorro. He was carrying a huge golfing umbrella and was stopping to play his kazoo for people for money. His kazoo playing was rubbish, but he made up a song about me on the spot in Jamaican patois. It was a bit surreal, but quite life affirming in an odd sort of way.

“The other moment that stands out is a simple one. I was photographing on Old Mill Street in May and a woman in her early 60s was slowly making her way away from the city centre using a trolley walker for support. She sat down outside the pharmacy and we started chatting, as it would have been strange not to, given we were the only two people on the street at 4am.

“She told me she’d been doing a night shift and had missed her bus home, so was walking the two miles. I was astonished by this endeavour. She then looked up and around her and said, ‘Ancoats will be lovely when it’s finished,’ and I felt she could have said that about anytime over the past 200 years, and maybe for the coming decades.

She then stood up and carried on walking. After what I thought was only a few minutes I turned around and she’d totally disappeared from view, from a straight road, plodding along. It was almost as if she’d been a ghost.”

“The phrase ‘change is inevitable but progress isn’t’ kept coming back to me,” says Simon.

“Heritage is more than just bricks and mortar, it’s a state of mind. I wanted to ask the question, what are we as Manchester? If you’re knocking something down, what are you going to put in its place? You’ve got to be careful you don’t demolish the soul of a city whilst you’re running rampant, hoping to make it better.”

“I’d like this to start a debate and the way to do that was to collaborate with others, using the photographs as a catalyst for people to think about the change around us.”

“In 20 or 30 years, someone else will have an opinion on the city. I’d like to think I’m creating social history through my photographs, leaving clues for historians to see exactly how I feel the city is developing.”

For for more information and details on how to book places and join in with the Not Quite Light weekend of events, go to: notquitelight.com/weekend