Operators named for The Pilcrow, the pub built by the people, for the people 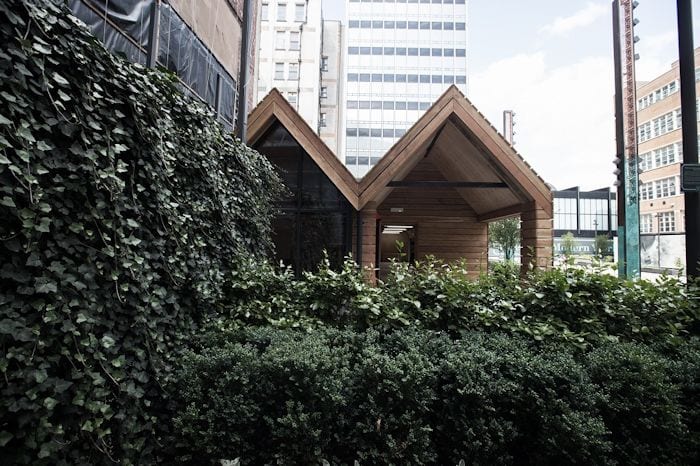 On the face of it, the NOMA neighbourhood will bring life to an area that’s currently rather barren. And what better way to do so than with a pub. But this is no ordinary pub. It’s a pub built by the people, for the people, on the site of Manchester’s first ever steam mill.

“It’s a fitting extension of NOMA’s industrial heritage to create a pub built entirely by local hands,” according to David Pringle from The Co-op, “and we believe a genuinely new, people-focused way of creating a community.”

The interior of The Pilcrow,  the pub in Sadler’s Yard, has been built during a series of weekly master classes which have been running since January. The classes aim to teach skills often overlooked in modern society and to connect the local community with the space.

But when it comes to choosing breweries, the choice will remain with the experts. All Our Yesterdays,  a new collaboration between Jonathan Heyes, owner of successful local bars Common and Port Street Beer House, and Paul Jones, co-founder of Cloudwater Brew Co, have been chosen as the official operators.  They will run a schedule of regular events when the pub opens in the square at the heart of the NOMA neighbourhood in September.

“It’s been a long run up to this and this is a significant moment for everyone involved in The Pilcrow,” says project leader Ben Young. “We’ve worked closely with Jonny and Paul on everything from the design of the bar to the beers on tap and the pub is going forward in the safest hands imaginable.”

The Pilcrow promises a rotating list of seasonal beers from Cloudwater Brew Co, alongside which the pub will also be serving up a tailor-made beer brewed in a barrel assembled by volunteers at the White Rose Cooperage in Yorkshire. With the likes of Common, PSBH (who also run Indy Man Beer Con) and Cloudwater Brew Co at the helm, quality will be the focus, and there’s likely to be premium prices to match.

“We’ve followed the development of The Pilcrow since planning was granted last year” says Jonathan Heyes. “It’s an exciting opportunity for us to start our new venture somewhere with such a unique story.”

A safe bet as well as a reassuring one. Whether The Pilcrow becomes Common bar 2.0 remains to be seen, but for now it is set to bring beer and people to a part of the city centre in need of both.