Pre-match at Old Trafford used to be easy. Grab a couple of cans from the off licence and stand on the street soaking up the atmosphere. If the weather was too bad in winter, you just needed to brave the beer throwing in the Trafford or the queue at the Bishops’ Blaze.

Since the police banned drinking on the street – there was an incident of can throwing at a Leeds United coach before an FA Cup tie – the choice of pre-drinking establishments has become a little more creative. Especially after the Trafford closed for most of last season.

We’re embarking on a tour of all pre-match venues to give our verdict on the atmosphere, beer and convenience for fans.

We’re starting with the United Bar, Café & Off-Licence. It’s not the fanciest of venues but it’s decent for pre-match atmosphere and it’s close to the ground.

Did we mention it’s a converted chippy? 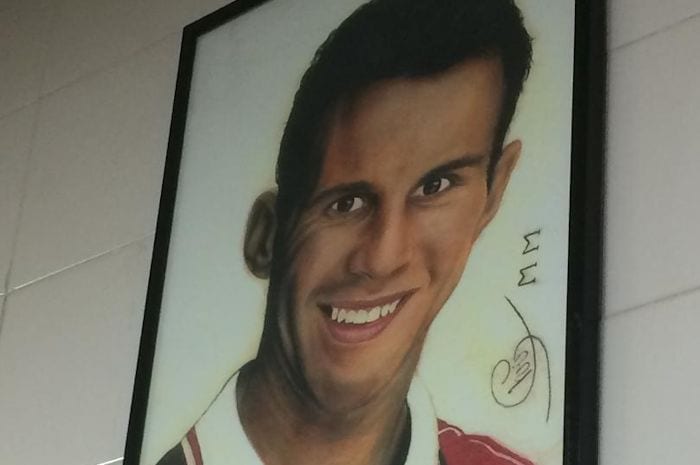 On the corner of Stretford Road and Sir Matt Busby Way, so you can’t get much closer to the ground. It’s a good spot for first-timers looking for a pint in and around the vicinity of Old Trafford and ideal as a meeting spot for fans coming from different directions around Manchester.

Can I get a decent pint?

When you claim to be not just a café but an off-licence as well, you’d expect gourmet coffee, herbal teas, cake and a wide selection of standard and artisan beers. But this is the football so of course there’s none of that.

What there is are cans of Stella, Fosters and Carling, and pints of pretty much the same. A can will set you back £3.50 and a pint £4. It’s not that cheap and an average selection but it does the job before the match. Just about.

You also don’t need to pay to get in like a lot of pubs in the area on matchday. Which is a bonus.

I’ve been in here a few times before the match over the last season and a half. Like the Trafford, you get a lot of Irish fans over for the weekend, so the atmosphere is always good. The ambient lights also seem to draw European away fans like a beacon, so it’s always packed with good natured Europeans before Champions League or Europa League matches. It must be the café allure that drags them in. Benfica a couple of weeks ago was decent as was Feyenoord last season. Space can sometimes be a premium, but just get your elbows out and you’ll be fine.

Only downside is the content on the TV screens. It’s usually chart hits blaring out with no sign of Jeff and the boys on Soccer Saturday. As ever with screens in boozers they grab your attention. Football fans eating chips, drinking pints staring at Little Mix on TV is odd and slightly disconcerting.

How authentic is it?

The ex-chippy vibe gives it a proper football feel. You’d never drink somewhere like this any other time of the week. The walls are adorned with black and white, colour and hand drawn pictures of former players. Highlights are a Gordon McQueen black and white head shot, anything of Eric and a weird hand-drawn mash up of Ryan Giggs and Ronnie Johnsen. I think it’s supposed to be Giggs. Some of these are priceless.

Of course there is. Remember it’s a café in an old chippy. Don’t be fooled by the cramped nature when you get in. There’s a back room serving up the usual chip shop specials at the usual chip shop prices. It’s got one up on Lou Macari’s as you can get out of the rain and sup your pint while eating.

Should I try it out?

Hotel Football this isn’t. But not everyone wants that before the match. This does the job. You can grab a pint, some food and a bit of pre-match banter. My dad’s mate has affectionately nicknamed it the cocktail bar. Enough said.