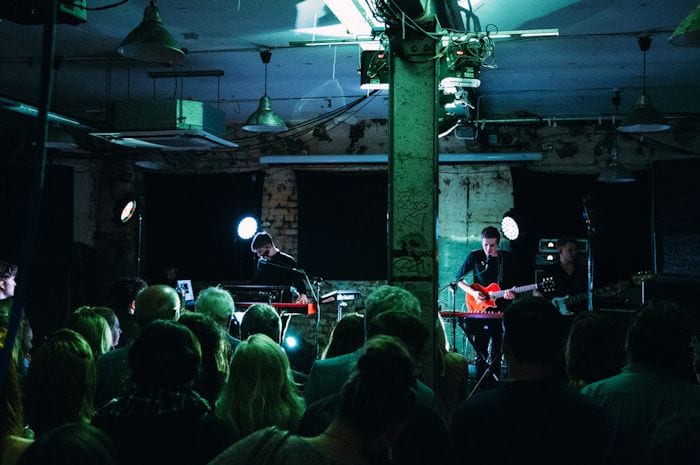 A huge new electronic music festival from Factory Records’ Alan Hempsall is launching across nine venues in Manchester’s Northern Quarter next weekend – and, for the most part, it’s going to be free to attend.

Subliminal Impulse builds on smaller experiential events Alan (below) has curated across the city and will see him bring together artists from across the world to Manchester to explore the notion of electronic music in the heart of the post-industrial city.

The festival will mark the first performance for Carter-Tutti, who were some of the first musicians to successfully fuse experimental electronics and acoustic instrumentation, since appearing as part of seminal industrial band Throbbing Gristle in 1980.

Both renowned solo artists in their own right, the duo have played together in various guises over the years, most notably in Throbbing Gristle then as Chris & Cosey, releasing four albums of electronics, sampling, Cosey’s vocals and cornet playing on Rough Trade.

Having witnessed them play as part of Throbbing Gristle at Rafters in Manchester in 1980,  Alan tells us it’s a real pleasure to invite them back to play in the city all these years later.

Alongside a host of mostly free gigs featuring around 30 artists, the grassroots festival will also feature a ticketed discussion panel involving key figures connected to the city’s electronic music scene.

Chaired by media sponsor Electronic Sound, anyone heading down will hear insights from author and journalist Jon Savage, musician John Foxx and Berlin-based musician and filmmaker Mark Reeder on how the electronic music scene has changed in Manchester since its emergence in the 1970s.

And upstairs, Yamaha will be hosting a music suite alongside Sternberg, who make Cubase digital audio work stations. So if the shows pique your curiosity, you can go round the corner and sit down with the technicians and their many synthesisers and mixers to find out how exactly the music is made.

A member of Factory Records artists Crispy Ambulance and a lifelong fan of electronic and industrial music, Alan famously stood in for Ian Curtis on stage with Joy Division at Derby Hall in 1980.

He told us a partnership with Yamaha this year has been key to helping him achieve his vision of making the majority of the festivals’ events free to the public.

He’s outspoken about how the traditional business model of festivals can be a hindrance when it comes to booking talent – and we find can’t help but find ourselves agreeing with him.

“If all your drivers are economic then you’re doing that at the expense of culture, and you would consider certain people to perform if the figures stack up,” he told us.

“The minute you’re curating with that as your baseline I think that’s rubbish, frankly – it’s not gonna help me put someone on no one’s ever heard of – there’s a couple of people on this festival who’ve never played live before.

“The big thing about the festival is that a lot of it is going to be free, apart from the ticketed events. There’s Wrangler at the Soup Kitchen with ScissorGun and LoneLady, Carter-Tutti at BOTW, and there’s a Q&A with John Foxx and Mark reader and John Savage on the Saturday lunchtime at BOTW.”

Free festivals were massively popular 30-40 years ago and, whilst it’s not a new idea, he thinks that certain social signifiers suggest it’s a good time for promoters to be going down this route again.

“It works for me because I’m showing brand new people and hoping that people with a passing curiosity will come where they wouldn’t spend £70 on a wristband and that’s the reason why I did it as well as bucking the trend.

“I think it’s important that if you are going to do something like this that it does have a philosophy about it, and I think if something’s got a philosophy then it gives it a little bit more power.”

It feels like a sort of punky, two’s up to what has become the modus operandum for club and festival promoters – putting artistic integrity ahead of profit.

And whilst this might be the festival’s first year, Alan is already looking forward to doing it all again in 2020.

“I’m already speaking to partnerships with people, laying the groundwork for partnerships maybe taking place in 2020 that would give me the power to do it a little bit bigger,” he says.

“I”d like to have a little bit more of a reflection of what we do on the smaller evenings where we just have one evening, local film makers, let’s have a cinema room – why not?”

All of the gigs taking place over the two-day festival will be free to attend, apart from Wrangler’s show at Soup Kitchen with Scissor Gun and LoneLady, and Carter-Tutti’s performance at Band on the Wall.