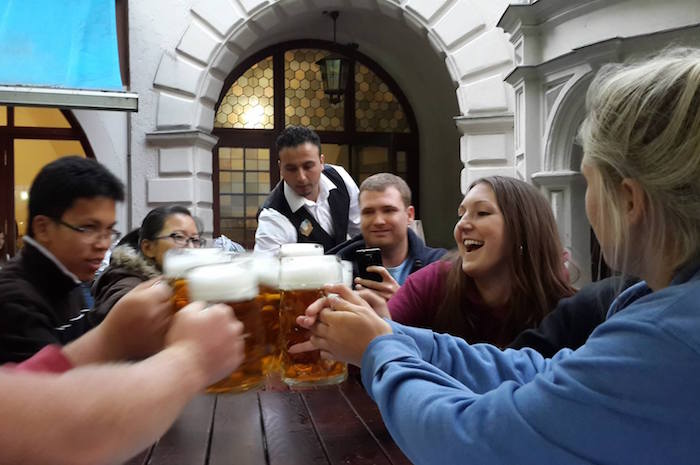 The newly re-opened Adelphi Lads Club in Salford is the first venue for Sacha Lord’s ‘Hospitality Hour’, a new campaign created to thank Manchester pub-goers who have loyally supported the sector over the past two years.

Sacha, the Night Time Economy Adviser for Greater Manchester, has announced he will provide an hour’s free drinks at the North George Street venue this Sunday evening between 5pm and 6pm.

“This is all about getting together and thanking the people of Greater Manchester for their support over the past two and a half years,” said Sacha.

“As a city region, we suffered tougher restrictions than any other during the pandemic, and now with the difficult economic environment, our operators are once again at the precipice of closure.

“It’s about time I bought everyone a pint, and what better way than to launch a summer hospitality hour across our ten boroughs.

“I’m looking forward to being at each one to personally thank landlords and staff and the punters who have kept our sector going.”

The Adelphi Lads Club was formed in 1888 by 23-year-old teacher Walter Southern, as a means to keep impoverished kids off the street and out of trouble.

It quickly became the centre of the community before closing its doors in 2008 – and was re-opened just last month.

The venue will be open on Sunday from 2pm with music by Mas O Menos – a record label born to encourage a cultural and musical exchange between the UK and South Africa – seeing the weekend out in style.

“We are delighted to be the first venue for Sacha’s Manchester Hospitality Hour this Sunday and hope to see as many people down here as possible,” said Callum Broom, co-owner and operator of the Adelphi Lads Club.

“The past two years have been the most challenging of our industry, and his continued support and championing of the city-region has been invaluable, and this is a great way to give back those who have supported us all through this time.”

The first ‘hospitality hour’ will take place this Sunday 26th June at the Adelphi Lads Club, North George Street, with free drinks between 5pm and 6pm.