T20 has been nothing short of a revolution in cricket. 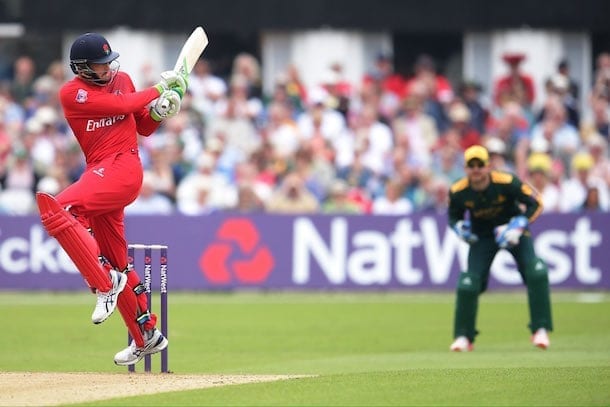 Just 20 overs a side, it was frowned upon by purist initially but has now been largely embraced as an exhilarating format that provides drama and demonstrates skill, not just slogging it for six.

Despite an unhealthy obsession with Ian Botham’s Twitter feed, I’d never be able to hold a conversation with Nasser Hussain, but much like Beefy himself, I know how to have a good time. And so, I accepted an invitation to go and watch Lancashire Lightning against arch rivals Yorkshire Vikings in the Nat West T20 Blast. Here’s my log.

Dateline June 3 2016. Destination Emirates Old Trafford. The War of the Roses. It doesn’t get much better than this. Lancashire are reigning T20 champions and Yorkshire arguably the finest team in the land although, like Lancashire, their T20 form has been letting them down. This was always going to be a close game, and outcome aside, an entertaining one for both sides.

3pm: I’ve clocked off for the cricket and am getting sunburnt outside Albert’s Schloss. Only golf spectators wear sun cream. And cricketers.

5pm: Stadium scran. Because we’re VIP’s we get in the ground early for a buffet and a beer. Beef stew and lager. They’ve got us sussed.

6:27pm: With the game just minutes away, there’s growing dissatisfaction with my order of three pints of Guinness.

6:30pm: And they’re off. 18,000 spectators packed into the ground and Lancashire bat first. Internationals Guptill and Petersen are first in, from South Africa and New Zealand respectively. First sip of Guinness goes down like a treat. Who says it tastes better in Ireland?

6:41pm: Guptall caught. I begin to fear the worst as the abysmal All For One by Stone Roses blasts out. There are concerned faces across the stadium, at least I imagine so. Hard to tell with the fancy dress.

6:46pm: Peterson is caught and Livingstone comes in. I turn to those around me and say “the Lanky lads will win it for us” – yeah I did, so shut up, just a coincidence that it turned out exactly like that!

7:30pm: Butler hits his second successive six while Liam Livingstone races towards the fastest 50 in T20 for Lancashire. There’s talk of Brexit and we begin to contemplate whether anyone who’s voting to remain has ever actually been in a Wetherspoons let alone seen these beer mats.

End of innings. Lancashire have put up a respectable score of 204 – 7 and I argue with my uncle that it’s definitely his round and I don’t care about the tutting, I want another Guinness.

8:15pm: Yorkshire make a solid start, scoring consistently with no loss. The flames pitchside are becoming increasingly more useful as the sun sets.

Good score for @LancsCCC, hopefully can get the big hitters for Yorkshire out early! #lancs #T20 #T20Blast pic.twitter.com/VnicnUeuXd

9pm: Despite Joe Root’s best efforts, this one’s going to the red rose. They’re just not hitting enough boundaries, Liam Plunkett’s bat went further than most of their shots.

9:20: Yorkshire need to score 31 off the last over. Lancashire win by 26 runs – a convincing win for the reigning T20 champions. The Vikings have been struck by Lightning. My urge for the loo is outweighed by positive signs on Uber so I make a dash for a cab and relieve myself in a city centre pub. Cricket aficionado or not, this is a night of excitement, big sixes and not that overpriced beer. Winner.