Making a transition of any sort is a challenge. But if you’ve been bullied through your childhood and realised that you’re in the wrong body, it can be even more so.

Something only too clear when I met Holly Hutchinson, the Salford-born transgender comedienne who found her path through it all thanks to sheer will and stand-up comedy.

We chatted about her journey and her new one woman show Meet the Stevens – part of this year’s Greater Manchester Fringe Festival.

My first question was, of course, why stand-up comedy?

“I started it all really because I used to be really shy. I struggled with my confidence. So when I started to transition, I thought ‘I don’t want to be shy any more. I want to get over it, so what’s the thing that’s going to scare me the most – stand-up comedy. 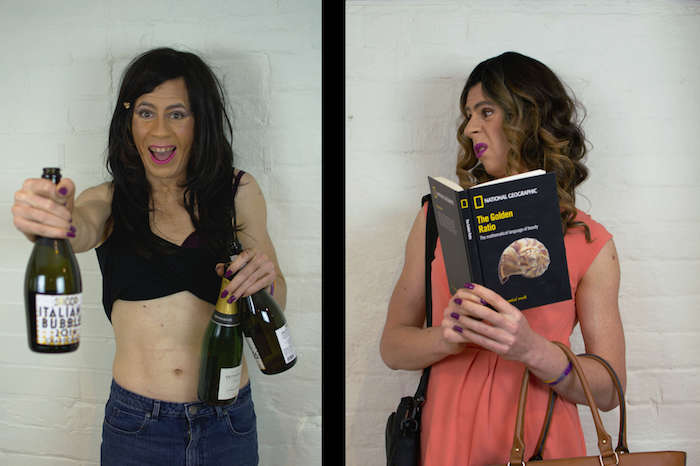 “So I did a stand-up comedy course. For the first week I could barely speak into the microphone in front of ten people. By the end of it, I was all over it. I was still quite nervous, but once I believed in myself, I enjoyed it more.

“When I’m on stage, I can laugh about my journey. I use my journey and going through the whole transition process (transgender comedienne) as my material. It’s hard but generally it’s unique and new. I believe it’s important that we talk about things that are sensitive. Just get them out there and give people an understanding of what they’re about in a light-hearted comedy way.

“At the end of last year, I was gigging up and down the country, wherever it would take me. I’ve done the gong shows. I’ve done the dodgy gigs. I’ve even done a gig above a kebab shop. It was in Worcestershire, as part of Pride, and there was only one gay bar. The only place you could buy alcohol was above the kebab shop. There was a little bar, I don’t know if it was legal, but there was a little bar, a seating area, and then an outside terrace. The stage was a small wooden box and you didn’t even have a microphone. It’s was one of those gigs that I’ll look back on if I ever make it and think ‘oh yeah, that was fun’.”

“I wanted to be the first person to combine aerial skills with stand-up comedy, but there is going to be someone doing it at the Edinburgh Fringe this year. I’m gutted. He’s been doing stand-up for six years and in Edinburgh he’s going to combine the two.”

“I didn’t think I was ready to do a full show in stand-up as myself. I needed something else. So I asked what was the absolute opposite of me and decided to create a sister. I hate reality TV. I hate fake tans. That’s the opposite to me, so I created this over-the-top character who is more orange than Donald Trump and David Dickinson combined, and made her outrageous.  It’s going to be a debut for that character before I take the show to the Edinburgh Fringe. That’s the big one.

“I still can’t get over the fact that a year ago I’d never done stand-up and now I’ve written the show and I’m doing Manchester and Edinburgh!”

As well as performing at the Greater Manchester Fringe, you can also catch transgender comedienne Holly at the Sparkle Weekend, Manchester’s celebration of all things trans.

“Sparkle is quite a weird one in a way. I went to Manchester College and the stage is in Sackville Gardens. The number of times I’d have lectures and just look into the Gardens. It’s weird because I’m returning as the real me. In an ‘I am who I am, I’m in transition’ and ‘I’m going to be playing a stage in a place I grew up in, and be able to say to the world ‘this is the real me’ in my home town. It’s just going to be amazing.

“I’m not very emotional. I got bullied quite a lot when I was young and I just learned to be tough. But I think this is a gig where I might just shed a tear or two.”

I suspect, Holly, you may not be the only one.