ManFran: what Manchester has in common with San Francisco

“Manchester reminds me very much of San Francisco. Even the weather’s the same.” Mark Delaney Robinson, American captain of Manchester Giants basketball team, 1997

Today is the launch of Virgin Atlantic’s first ever direct flight from Manchester to San Francisco and it’s got us thinking about these two cities. Mancunians and San Franciscans, both native-born and imported, are a proud bunch and they’re convinced they live in a pretty fabulous city.

They’ve got the Golden Gate Bridge, Haight Ashbury and Alcatraz. We’ve got Beetham Tower, the Northern Quarter and Strangeways.

Us Mancs actually have more in common with the Friskies across the pond than we might realise. This chap Mark seems to think even we even have the same weather.

Well good ol’ Mark isn’t wrong here. We certainly get our fair share of bad weather.  We’ve already had a snowy morning and now it’s set to rain for the rest of today, followed by gale force winds on Wednesday. Thursday morning promises a little sun (between 9.30am and 9.45am) followed by an afternoon of showers and a Friday of fog.

But things aren’t all sunshine and rainbows across the pond either.

On five of the seven days this week, it’s going to rain in San Francisco. Now, it’s not quite Manchester but that’s not bad going. Fog is also a signature that Friskies can look forward to on their early morning commutes. But in the same way that fog has become a San Fran signature, with photographers capturing the tumbling mist across the Golden Gate Bridge, Manc photographers have started snapping landmarks in our signature drizzle and it makes for some epically atmospheric shots. In the battle of fog vs rain city, I declare it a tie.

San Fran has the Golden Gate Bridge but we have Beetham Tower. Typically people cycle across the Golden Gate or climb up The Twin Peaks to enjoy the panoramic view of the Bay Area . We have a less strenuous time as, at the push of a button, we’ve whizzed up 23 floors and can enjoy the breathtaking view of the entire city. San Fran might have the famous painted ladies of Steiner Street – not what you think – but we have the legendary mills of Ancoats. I reckon it’s a close call but I declare it a tie. 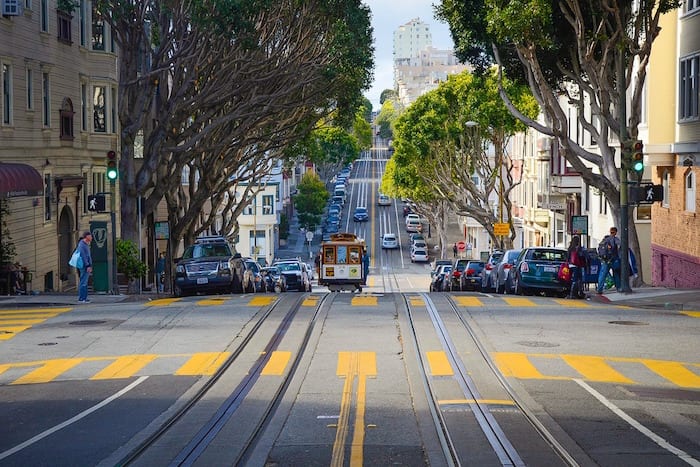 Yes, fellow Mancunians and San Franciscans alike can enjoy the trials and tribulations of trying to get a seat on the cable car, or, as we like to call it, the tram. The morning rush in Manchester makes for soggy carriages and the occasional strangers armpit to the face. Our San Fran counterpart makes for a much more enjoyable ride. The carriages are light and airy and the trips are very reasonably priced – which is more than I can say for Manchester. At least they’re mostly on time.

San Fran’s Alcatraz has had a famous film based around it. Strangeways was the inspiration behind The Smiths famous last album. People buy tickets to visit Alcatraz but you probably wouldn’t want to do that in Strangeways.

If you’re one of the cool kids on the block and like to party down in the NQ until the early hours then you’ll be glad to know San Fran is home to the one and only Haight Ashbury.  Haight Ashbury is one of those neighbourhoods where past, present and future merge in a glorious ensemble of countercultural brilliance. Peruse the vintage clothes shops and record stores, sip on a cappuccino and people watch, sign a Green Party petition, dance in the street, come as you are and do whatever the heck you like because you’re in San Francisco and you can. The clock at the corner of Haight and Ashbury Streets is permanently set to 4:20 – known to locals as ‘bong hit time’ – and there’s a tell-tale aroma wafting out of the many medical marijuana clubs. Rather like some of the side streets of Manchester’s NQ.

San Francisco has the largest Chinatown outside of Asia. Manchester’s Chinatown is the second largest in Britain after London.

San Fran is known as the centre of the worldwide LGBT community, whist Manchester has a thriving LGBT scene centred around the world famous Canal Street – believed to be the largest LGBT community in the UK outside London.

It’s definitely cool being from the city where Oasis, The Stone Roses and The Smiths all made their mark but San Francisco inspired the careers of Janis Joplin, Bob Dylan and the Grateful Dead. From the terraced houses of Burnage where Noel and Liam Gallagher grew up to the candy coloured Victorians of Haight Street where Jimi Hendrix crashed, both cities harbour a musical pulse like nowhere else.

To any San Franciscans reading this, I think it’s safe to say that Manchester is so much more than cobbled streets and bad weather. We already know that San Francisco is more than the Golden Gate Bridge. Both cities have iconic landmarks, plenty of drizzle but also an electric atmosphere that will give you goose bumps one minute and warm you to the core the next.

San Francisco might have a beach and Manchester famously hasn’t, but we are home to the greatest football teams in the world bar none. So there. In the tale of these two cities, it’s an absolute draw.

Virgin Atlantic are launching their first ever direct flight from Manchester to San Francisco. So, if you’re mad fer ManFran click here.

RT for your chance to win one pic.twitter.com/HfbP4EcF8Q