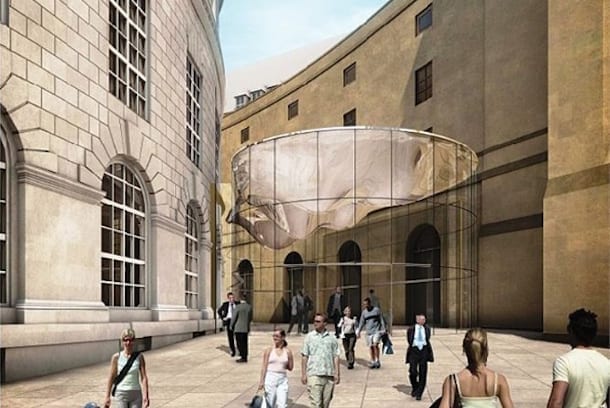 Manchester is gearing up for another cycle of redevelopment that will see various sites brought forward and shiny new obelisks erected.

But let’s not forget that the city has spent a fair old whack modernising and polishing up Manchester’s more historic assets recently, too.

‘As a progressive city, we can
often bemoan change.’

The Royal Exchange is set for a multi-million pound revamp – including a roof garden and 120,000 sq ft of new office space.

The Central Library and Town Hall extension have had their £170m facelift, opening out the former Rates Hall in the latter to one of the city’s most jaw-dropping public spaces.

The two are now linked by THAT new glass walkway, which has divided opinion among fans of the built environment, but which I actually quite like, despite knowing nothing about any of that. Both sides of the Town Hall – Albert Square and St Peter’s Square – will soon be able to claim to be the desirable public spaces they always teased at.

Victoria Station, tacked on to the hugely successful Manchester Arena, is being given a £44m spruce-up that will transform the grim and drafty interchange into a light and airy space – thanks largely to a new glass roof. The works will bring to the foreground many of the 1844 building’s Grade II listed features such as the war memorial, glass dome, Soldiers Gate, station mosaics, wall map and the glass and iron canopy that runs the length of the station façade.

Near Manchester’s other main mainline station, Piccadilly, plans are afoot to revive and redevelop the former Mayfield Depot and London Road Fire Station-if anyone stumps up the £10m being asked for the latter, of course.

And the Whitworth has shown just how well you can merge the old with the new with a £15m redevelopment which cleaned up the original 1889 frontage alongside a clean and modern glass extension at the back end, overhanging and overlooking the vast park. An impressive collection of contemporary artwork is now complemented by a jaw-droppingly handsome home.

Manchester’s historic cotton mills are all part of the post-industrial renaissance, as the mills of Ancoats become a des res for would be apartment dwellers.

And the Corn Exchange is hoping to end a 20-year identity crisis by spending £30m on its current conversion into a food and drink hub.

As a progressive city, we can often bemoan change. Everything was better age ago, because we were younger. But in terms of mixing the old with the new, we’re not doing too badly. For all the new bars, restaurants, coffee shops, office blocks and whatever else gets thrown up as Manchester embraces wave after wave of investment, there will still remain plenty of pieces of the city that once was.

The only real difference is that you can probably buy a latte there now.