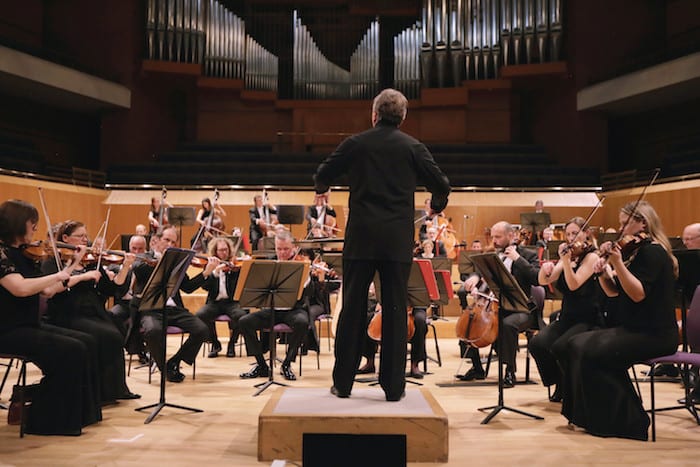 The oldest professional orchestra in the UK gave its first concert at the Free Trade Hall on 30th January 1858, since when its fortunes have been as tempestuous as the Storm movement in Beethoven’s Sixth.

Twenty years ago, the Hallé was on the brink of financial collapse. Had it come to pass, this would have been a huge embarrassment for the orchestra and for the city.  The crisis hit just two years after the Hallé had moved into its new showpiece home, the £42 million Bridgewater Hall. And it wasn’t the first day that the orchestra’s music almost died.

The orchestra that was to become the Hallé began in the most regal of circumstances – a collection of musicians recruited to entertain visitors to the Art Treasures of Great Britain exhibition, opened by Prince Albert in May 1857.

Held in what became the White City gardens in Stretford, it remains the largest art exhibition ever held in the UK, and possibly in the world, with over 16,000 works on display. It attracted over 1.3 million visitors in the 142 days it was open.

The orchestra played for the Prince Consort at the opening ceremony and for Queen Victoria when she visited the exhibition the following month – only her second trip to the city in the 20 years of her reign thus far.

Born in 1819, Karl Halle had studied in his native Germany before moving to Paris in 1838 and to London 12 years later, changing his name and adding the accent to the last letter of his name so people would not call him Hall. He came to the north west to conduct the Manchester Gentleman’s Concerts, but the orchestra was said to be so bad that he considered returning to Paris.

Then the big chance came. After the Art Treasures exhibition, Hallé kept most of his selected musicians together and created a new orchestra in his name which he conducted at virtually every concert until his death in 1895.

The orchestra had nearly folded in 1860 but, thanks to community support and Hallé’s hard work, it managed to continue and eventually thrive. Hallé saved money by playing all the piano concertos himself. When he died, he funeral procession to his burial place in Weaste Cemetery brought his adopted city to a standstill.

Since its founder’s death, the orchestra has only had 11 principal directors including its current incumbent Sir Mark Elder – one of six of the Hallé’s conductors to receive knighthoods.

Throughout its 160 years, the Hallé has been one of the world’s most respected orchestras. In 1908 under Hans Richter, it gave the first performance of Sir Edward Elgar’s Symphony No. 1. It retained its international status through the 1920s and 30s, but almost went out of existence during the war.

In the Manchester Blitz of December 1940, the Free Trade Hall was all but destroyed by German bombs and the number of musicians was reduced to about 30, with most younger musicians serving in the armed forces.

It was rescued and revived by Sir John Barbirolli, who had been a guest conductor in the 1930s and returned to Manchester in 1943 from his post as conductor of the New York Philharmonic.

Barbirolli rebuilt the Hallé to world class standards and remained as the orchestra’s principal conductor for 25 years until retiring in 1968 – a stint that included the triumphant return of the Hallé to the rebuilt Free Trade Hall in 1951.

But by February 1998, owing to a combination of poor financial management and the costs surrounding the ambitious programme of celebrity conductor Kent Nagano, the Hallé was in deep trouble, having lost £600,000 in one year and facing accumulated debts of £1.8 million.

The number of players was cut from 98 to 80, and there were pay cuts all round. At one point it was suggested that some musical instruments, including a Stradivarius violin, would have to be sold to tide the orchestra over until rescue funds could be raised.

The orchestra survived and a new stability established. In 1999, Nagano handed the baton to Sir Mark Elder who has remained as principal conductor for 18 years.

On Sunday 28th January, the Bridgewater Hall will host a joint concert by the Hallé and the Hallé Youth Orchestra conducted by Sir Mark and Jonathon Heyward respectively for performances of Gotterdammerung, the final part of Wagner’s epic Ring cycle, and The Trojans by Berlioz.

The concert programme notes say: “This coming together of younger and more experienced musicians would have delighted our founder Sir Charles Hallé who conducted the orchestra’s very first concert 160 years ago, almost to this day. The event, beginning with a short open rehearsal, features exhilarating orchestral music from two works dear to the great man’s heart.

“Sir Charles would have been so proud.”