Manchester Food & Drink Festival 2015: highlights of what to look forward to 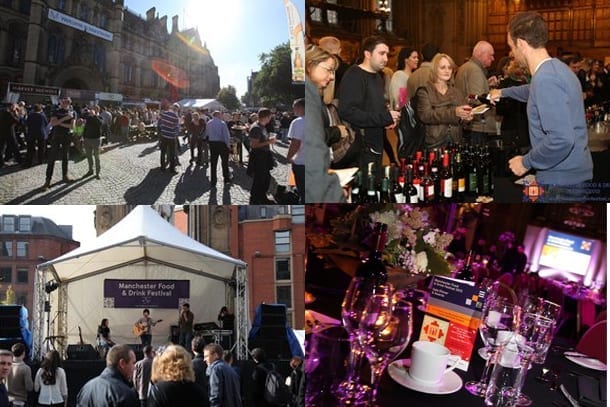 Returning for an 18th time, Manchester Food & Drink Festival returns to Albert Square with a fresh, revitalised program this summer. Celebrating the very best of what the city has to offer as the fastest growing restaurant scene in the U.K.

‘Celebrating the fastest growing
restaurant scene in the UK’

The mammoth 12-day event will take place from September 10th until the 21st and promises to be bigger and better than ever, with the first details announced last week. Just in case you missed them, here are the highlights of what everyone has to look forward to.

The GBBO tent will be upping sticks and coming to Manchester for The Great Manchester Bake Off contest. Which invites the regions top bakers to enter the race to become champion via registering and applying online. Entrants will be judged by Manchester’s answer to Paul Hollyowood and Mary Berry (who are yet to be revealed) and winners will be announced on the 13th September.

Simon Rogan will be hosting “Week Gastronomique” at the iconic restaurant The French. With all his head and executive chefs flocking from his renowned restaurants around the country (Michelin stars and all), with each chef creating specially created festival menus including Mr Rogan himself.

Fergus Henderson of the Michelin adored St John’s restaurant will be making the trip up to Manchester to share is incredible knowledge of drink for an early evening drink-a-long session.

Thomasina Miers- Winner of the 1st revised Masterchef back in 2005 and founder of Mexican restaurant group Wahaca will be hosting a celebration of heat and hard liquor with a Chilli & Tequila Festival. A number of chilli growers from around the U.K. and tequila suppliers will champion their wonderful products, topped off with chilli inspired demonstrations with Thomasina herself.

Liquor will feature highly in the festival with the “Big Indie Wine Fest” taking place for its 7th year at Manchester Town Hall, celebrating exclusive and unique wines. Meanwhile The Drinks Enthusiast will be showcasing boutique liquor at the decadent Elixir Bar in Deansgate.

MFDF have also teamed up with The Biospheric Foundation to create exciting new food projects, such as the “Mobile Urban Mushroom Farm” which highlights hyper-localised mushroom farming. The bounty of their labour can be enjoyed from the Street Food Mushroom Pad.

Manchester Museum and critically-acclaimed local chef Robert Owen Brown have also collaborated with both MFDF and The Biospheric Foundation to host the first ever “MFDF Bio-Historic Banquet” where diners will experience biosphere grown food in the surroundings of some of the most extraordinary exhibits from Manchester Museum, most impressively dining under the shadow of a great dinosaur skeleton.

The MFDF Gala Dinner & Awards in partnership with Harvey Nichols will take place in the stunning surroundings of Manchester Cathedral. Handing out 12 awards to outstanding local food and drink businesses couldn’t be a more fitting end to proceedings.

Tickets will be on sale for some of these events soon, whilst others will be free to attend by all.

Phil Jones, Festival Founder said: “I’m proud to announce this exciting line up of events, which we hope the city will get as excited about as we are already. We’ve worked hard to make sure that this year’s Festival is a true reflection of this astounding time for Manchester’s food scene. This is only the first programme announcement, so keep watching this space as there’s lots more in the pipeline. We officially invite every restaurateur, bar owner, grower, baker, maker and anyone who is passionate about food here in this city to get involved, and help us create a world-class food festival here in Manchester. Roll on September and book some time off now!”

The festival are looking for restaurants, bars and foodies to get involved in this year’s Festival, you will find the contact details at foodanddrinkfestival.com.

If you haven’t booked the time off work already, I would get on it! If these announcements are anything to go by, this promises to be the most entertaining year yet.