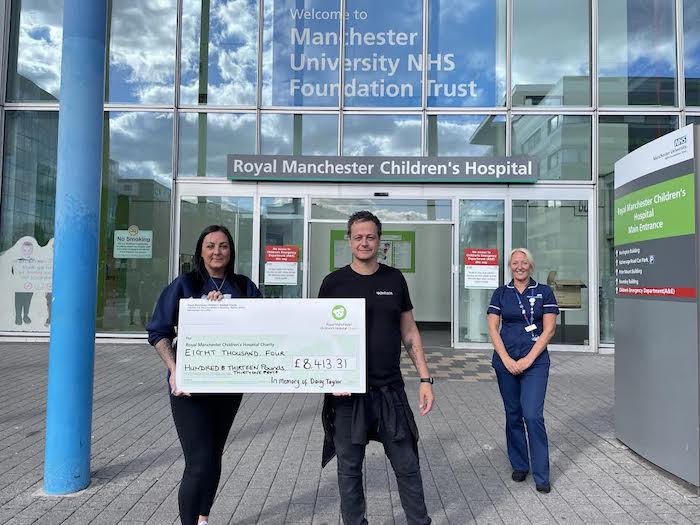 Daisy Taylor was the long-await child of Toni and Lance Taylor, who are from Rochdale.

After suffering two heart-breaking miscarriages, the couple were delighted when they found out little Daisy would be coming into their world.

Sadly, throughout her short life, Daisy suffered a number of medical complications, including cancer, which she was able to recover from, only to pass away from a lung infection.

She had just turned two years old when she passed away, holding hands with mummy and daddy as they said their goodbyes.

Daisy’s happy attitude and feisty character continues to inspire her parents, friends, and family, who have raised more than £10,000 for Royal Manchester Children’s Hospital Charity.

It’s their way of saying ‘thank you’ to all the incredible hospital staff who supported Daisy during her treatment and ensures other children and families will benefit from projects the Charity supports.

“She was so brave and amazing, she was my absolute hero,” said Lance. “Everything was always so fun with her.

“She went through so much in her life. It was unthinkable really, but she just got on with it. She was our little warrior. She was my everything and she was so brave.”

Toni, 43, added: “She was constantly in hospital having needles and all sorts of things but she took it all in her stride. She smiled throughout it all.

“But she was determined too. If she didn’t want to do something, she’d let you know about it. If there was one perfect word to sum up Daisy it would be ‘feisty’.”

After the two miscarriages, Lance and Toni had decided they would try one more time to get pregnant and were delighted when Daisy was born at a hospital near their home in Hurstead, Rochdale on 28th April 2019. However, the labour had to be induced, as scans had shown there was a problem with blood flow, so the birth was very stressful.

When Daisy was a few days old she was showing signs of Down’s syndrome and sepsis but the more pressing matter was that she still hadn’t passed her meconium (a newborn’s first bowel movement).

An all over body examination by a nurse revealed she had been born without a fully formed anus, so unfortunately the meconium was trapped inside Daisy, making her ill.

Toni explained: “She was blue-lighted straight to Saint Mary’s Hospital in Manchester and had an emergency operation to have a colostomy bag fitted. Immediately after the operation she was a completely different baby – she was a pinker colour, she looked much healthier and you could tell she was happier. That operation saved her life.

“After a traumatic birth, an operation at two days old, and then the Down’s syndrome being confirmed she went through quite a start in life.”

After 17 days in Saint Mary’s Hospital and a further four days in her local hospital, Daisy was finally allowed home and was able to spend time with her two older siblings Ellie, now 15 and Ethan, now 12, who are Toni’s children from a previous relationship.

Daisy was fed through an NG tube (feeding tube) and had a list of specialist medical teams looking after her at home – dieticians, speech and language therapists, a stoma nurse and community nurses regularly visited the house. When her parents started to try weaning off the NG tube, one of Daisy’s favourite treats was chocolate custard.

Toni said: “There is a picture of her that always makes me laugh. She has a little chocolate custard goatie beard and she’s staring at me because the pot was finished and there was no more left. She just looks disgusted with me that I didn’t have any more for her.”

In June 2020 Daisy had a major operation to have her colon reconstructed and an anus properly created so she was able to go to the toilet naturally. It was allowed to heal properly before her colostomy bag was removed with a further procedure in August 2020.

In October 2020 Lance and Toni married in Cyprus, a holiday they now treasure more than ever thanks to the memories they were able to create with Daisy. Toni said: “It was incredible, she was in her element. She was asleep when we arrived home and I remember her waking up the next day and seeing the rain outside. She was so annoyed. She clearly thought we’d moved to Cyprus and was gutted to be back in rainy England!”

It seemed most Daisy’s medical problems were behind her, but just a few months later in February 2021 Toni and Lance noticed a tiny ‘pin-prick’ type rash. At first, they feared meningitis but doctors at her local A&E suspected leukaemia.

“We were sent straight to the oncology unit at Royal Manchester Children’s Hospital where they confirmed she had acute myeloid leukaemia,” said Toni. “Lance was in absolute pieces. We were both devastated, but when it came to Daisy I think I was always the stronger one.”

Lance, 45, said: “I was heartbroken, but Daisy just kept on smiling throughout. Every picture we have of her in hospital she is smiling.”

Daisy’s first and second rounds of chemotherapy came but sadly the second round didn’t work as well as they had hoped. It was decided a bone marrow transplant would be the best course of action and a suitable donor was found. The transplant took place in June 2021, and thankfully it worked. But shortly after the transplant, Daisy developed an infection in her lungs called parainfluenza.

“After that her personality really did change,” said Toni. “It was difficult to get a smile or a laugh out of her.

“She was on a lot of medication and you could tell it was taking a lot out of her.

“The nursing staff were absolutely incredible with her though. They made a difficult time that little bit easier because they were just so good.

“We are so grateful to all of the oncology staff, the nurses, the consultants and specialists, the play staff and everyone on the Bone Marrow Transplant Unit and the Paediatric Intensive Care Unit who cared so much for our beautiful Daisy…even Mr Fraser Horwood who had performed her surgery’s in 2020 who still came and visited our Daisy all throughout her leukaemia journey.”

Lance added: “I honestly don’t know how the hospital staff do what they do. They don’t just look after the children, they look after the families too.”

Gradually Daisy started to deteriorate and she was transferred to the Paediatric Intensive Care Unit (PICU) for specialist support with her breathing. On the day she died, 26th July 2021, Lance and Toni were given a few hours to prepare themselves before the machines keeping Daisy alive were turned off.

“I sang this ‘Daisy Daisy’ song to her,” said Toni. “It was something I sang to her a lot and it annoyed her, but it was our little joke.

“It was such a bizarre experience saying goodbye. It all went by as if it wasn’t really happening.

“Saying goodbye that day was the hardest thing ever, but afterwards I spent time sat with her in the funeral home. That was so peaceful, I found that really comforting.”

Lanced added: “I hate thinking about the day she died. I still can’t get over the fact she has gone.

“She was always a lively character and I’ll always remember the amazing times we had together. She had me wrapped around her little finger and she knew she could get whatever she wanted from me.

“I’ll always smile when I think of her dancing to the Dancing Fruit on YouTube or A-ha’s Take On Me. She loved that one and we played it at her funeral.”

Since losing Daisy, her friends and family have done all they can to raise money for Royal Manchester Children’s Hospital Charity. This has included a Yorkshire Three Peaks challenge by Toni and her friend Helen, a charity football match, and Toni and Helen also recently took on the Rochdale Way in 24 hours.

The challenging 50-mile route unfortunately proved too much and the pair had to finish at 43 miles, but will be revisiting the site soon to complete the last 7 miles.

In the meantime, the family are busy planning the next fundraiser – a charity night at Rochdale Sports Club next year. Toni also has her sights set on a wing walk and to date the family has raised £10,825.15.

Donna O’Reilly, a Relationship Manager at Royal Manchester Children’s Hospital Charity, said: “Daisy sounds like quite a character and I’m sure left such a devastating empty space in the lives of everyone who knew her. I’m so sorry for their loss.

“The fact the family have taken on fundraising in her memory with such enthusiasm is really inspiring.

“Raising more than £10,000 for our Charity is fantastic and this money will enable us to carry on our lifesaving and life-changing work for the 280,000 young patients who visit Royal Manchester Children’s Hospital each year.

“We can’t thank Toni and Lance enough for everything they have done and continue to do.”

Anyone wishing to donate to Royal Manchester Children’s Hospital Charity in Daisy’s memory can visit https://daisyaustintaylor.muchloved.com/ To find out more about the Rochdale charity night on 11th February 2023, email toniaustin12@icloud.com