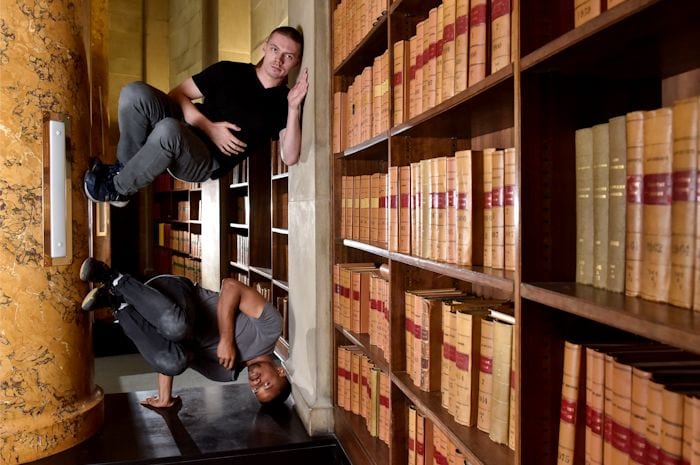 “When we were kids we always thought we’re gonna become successful dancers and tour the world and then come back to Manchester and set our own thing up,” says Kevin. “And that’s what we did.”

They met at Trafford Youth Dance Theatre in the mid-1990s and went on to train at the Northern School of Contemporary Dance.

Since then, they have flown the Manchester flag all over the world as Company Chameleon. They’ve performed in places like South Korea, South Africa, Trinidad, France, Germany and Sweden. But they feel that they are less well known in their home town.

This is something they are hoping to change with their latest project. They’ve been commissioned to create Illuminate, seven stories illustrated through dance in seven different spaces around Central Library. 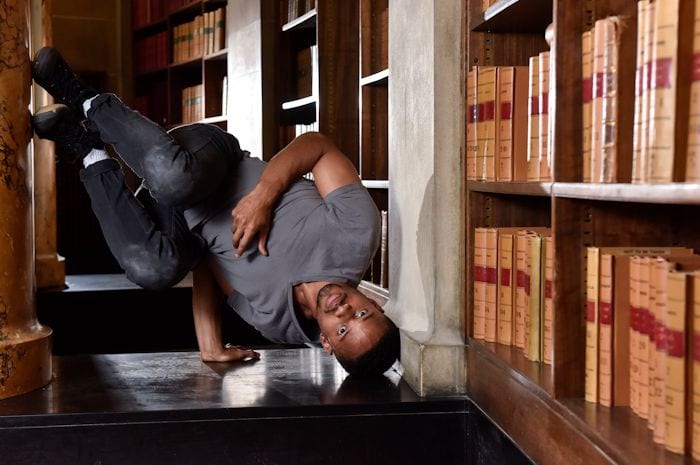 It will begin outside on the steps between the Corinthian columns and end under the dome of the Reading Room.

“That’s what a library does. It illuminates people,” says Kevin, explaining the concept behind the show. “I remember reading a book that talked about how there are seven archetypal stories or seven basic plot lines to all stories. That idea really resonated with me.”

Some of the stories have a narrative structure, whilst others are more abstract. But they have all been specially crafted to animate the library’s architecture.

“I wanted to bring alive the stories and people and relationships that kind of live inside the literature, inside the library, if that makes sense,” says Kevin.

One story follows the story of a husband and wife and their lives before and after he goes to war. As part of the research process for Voyage and Return, Kevin spoke to members of his family who are members of the armed forces to get an insight into post traumatic stress disorder.

“I don’t think anyone could really truly understand how it must feel to be one week killing people and seeing people that you care about be killed, and then the next moment you’re back at home drinking a cup of tea and watching Coronation Street. Like everything just clicks and we’re all a big happy family and you’re not affected by what you’ve seen or done.”

Another, Rags to Riches, takes a more abstract route. It’s about the way success is perceived according to social attitudes and gender. There will be a male version and a female version.

The first part is a comment on how, in masculinity, the one who is prepared to be the most aggressive is the most likely to be successful.

On the female side of Rags to Riches, Kevin wanted to touch upon the objectification of women and how success can often reduced to looks: “I wanted to capture how limiting and frustrating and patronising that is.”

Over a hundred people are involved in the project, including young dancers from Chameleon Youth, dance students from the University of Salford and Edge Hill University, a line designer and a costume designer, as well as all the team at Chameleon and volunteers.

Composer and musician Miguel Marin will create a completely new, contemporary score for the production as well as mentor and collaborate with MA Music students from the University of Salford, who are being given the opportunity to co-write some of the music. 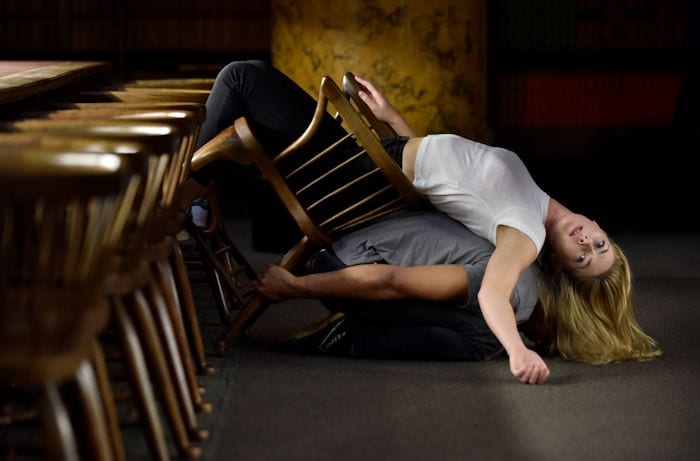 Illuminate is being performed on Friday November 24 and Saturday 25 November. All tickets have now been sold, but there will be a series of free performances this week, all of which are free to attend with no booking necessary.

On Monday November 20 from 12 to 2pm, you can attend a pop-up musical element of Illuminate’s specially-commissioned soundtrack by Miguel Marin.

On Tuesday November 21, you can see Company Chameleon’s dancers bring parts of Illuminate into the open air outside the library’s main entrance from 1pm.

On Wednesday November 22 , dancers from all over the world will share their responses to Company Chameleon’s original movement style in the building’s performance space from 4 to 5pm.

Finally, on Thursday November 23 from 10am – 5pm, you are invited to watch the final rehearsals before the show.

“Dance as an artform sometimes has less of a presence than other artforms,” says Kevin, “so this is an opportunity for us to fly the flag for dance through the creation of a piece which is free to go to, and which is in a building that opens its doors to everyone.”