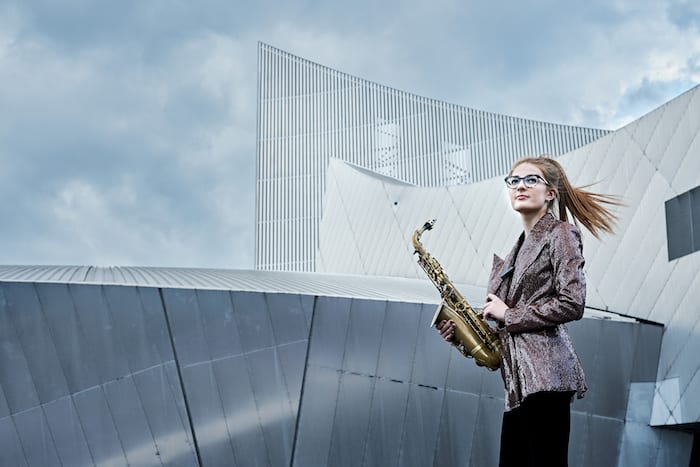 Described by The Times as ‘probably Britain’s most adventurous orchestra’, Manchester Camerata is all about shaking things up and challenging traditional expectations of what exactly it is that an orchestra does.

Not only do they lead the way on the world stage for orchestral innovation, Manchester Camerata also functions as a registered charity – sitting at the forefront of international music-led dementia research, as well as pioneering a community programme designed to promote social change.

Their next Manchester concert will take place at Manchester Cathedral and focus on music inspired by folk song, with an eclectic selection of compositions performed by acclaimed saxophonist Jess Gillam, winner of this year’s Classical Brit Awards.

Manchester Camerata has worked with Jess to curate this special programme that showcases her stunning ability.

The evening will start with Grammy-winning American composer Eric Whitacre’s 2000 composition October which aims to capture the transition of the seasons as the liveliness of summer melds into the cold, stark winter season.

Originally commissioned for a group of high school bands in Nebraska, Manchester Camerata will perform a version written for a string orchestra. Inspired by English romantics such as Vaughn Williams and Elgar, Whitacre’s simple pastoral melodies and harmonies aim to capture the magic of his favourite month and the natural transitions seen in the autumn.

Next up are Bartók’s Romanian Folk dances written in 1915 and based on a selection of Romanian folk songs from Transylvania which would have originally been played by locals on a fiddle or a shepherd’s flute.

Bartók sourced these first traditional songs by travelling through the remote corners of Hungary with an Edison phonograph, asking peasants and working folk everywhere they went to sing and play into the recording horn.

Over the course of his lifetime, the eminent composer travelled extensively through Slovakia, Bulgaria, Yugoslavia, Romania, Turkey and Morocco – amassing more than 6,000 recordings, and pioneering the study of music in its cultural and social context – known today as enthomusicology – through his travels.

Following this brief stop-off in Eastern Europe, Manchester Camerata will bring things closer to home with a performance of Three Welsh Songs by Huw Watkins. Composed for the Prince of Wales’ 60th birthday celebrations and based on traditional tunes, these have been selected with the mention of offering Manchester Camerata’s audience an audacious re-telling of three traditional Welsh folk songs, including Ar Hyd y Nos (All Through the Night). Although the songs have no lyrics, Watkins conveys both beauty and agitation in his imaginative, multi-layered compositions.

After delving into the rich history of Welsh folksong, Manchester Camerata will perform a special rendition of perhaps the most well-known English folk song – Scarborough Fair. Rearranged by their in-house arranger Simon Parkin for solo violin, cello and string orchestra, this will be the first time the orchestra has performed this version of the special folk favourite – with singing along warmly encouraged.

The evening will then delve into a different kind of folk song entirely as saxophonist Jess Gillam takes to the stage to perform David Heath’s The Celtic. Written in 1994, the piece’s intricate melodic passages and underlying folk themes take their inspiration from the Celtic tradition – played out over two movements.

The first, Ceilidh, captures the intoxicating atmosphere of a dance growing increasingly wild and uninhibited.

The second – a slow movement titled Lament for Collessie – expresses the composer and his family’s yearning to return to Collessie, Fife, where they had lived for a year. This mournful piece captures the emotion of Heath and his family who, during the autumn of 1994, had to move back to London and found themselves sorely missing their Scottish home.

A short interval will be followed by Grieg’s Holberg suite, a string piece written in the style of 17th-century French dance music with underlying influences taken from Nordic peasant folk songs and dances.

Lastly, the concert will finish with a piece specially commissioned for Jess by acclaimed saxophonist and Ivor Novello Award winner John Harle called Rant – also arranged by the orchestra’s own in-house arranger. This is the first time this version with saxophone and string orchestra will be performed and promises to offer a very special end to the evening.

Offering an evening of informal but upbeat classical music with a twist, performed by one of the country’s top young saxophonists, this evening will celebration folk traditions across the world in Manchester’s oldest venue and promises to change the way you listen to folk forever.