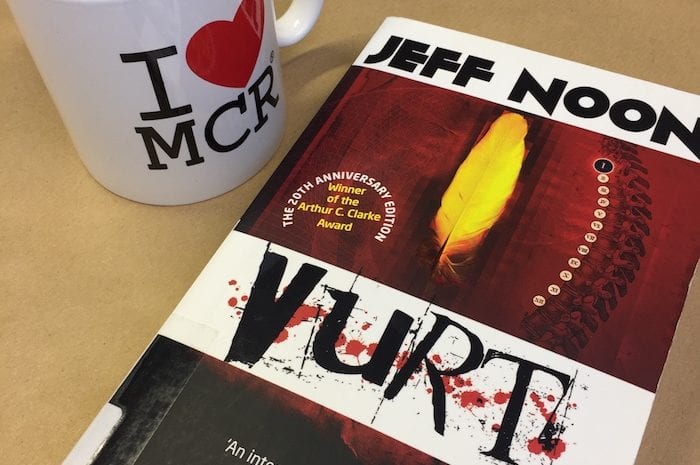 Morrissey could be right. So we’ve taken a leaf out of his book and started our very own book club. But not just any old books. Up for review are those written by Manchester authors (born and bred, adopted, dead or alive) or those set in our fair city. Welcome to MancBook Club.

Vurt is a 1993 science fiction novel, written by Droylsden-born author Jeff Noon. Winner of the 1994 Arthur C. Clarke Award and often described as one of the best novels of the nineties, it’s set on the streets and in the suburbs of an alternate future Manchester.

But will it satisfy our cravings?

The 90’s was the era of Madchester, when stories of the city’s music and drug culture  dominated the headlines and when an uneasy tension existed between the media and young people. It was during this time that Jeff Noon was a young man working in Waterstone’s on Deansgate, observing the cultural happenings around him, and where he wrote Vurt.

The book follows the story of The Stash Riders, a group of malcontent youths, all hooked on vurt, an hallucinogenic drug which creates alternate experiences via different coloured feathers, playing on the idea of virtual reality.

The narrator is Scribble, a young man who lost his sister Desdemona after they tried a form of the drug called English Voodoo. The result of the bizarre trip is also the birth of a disgusting, semi-conscious blob which they call The Thing from Outer Space. The story follows Scribble’s attempts to try to take The Thing back to where it came from via a Curious Yellow feather in the hope of rediscovering his sister.

Vurt is both rewarding and hugely disorientating, like the drug itself. The alternate reality the drug creates feels like an amalgamation of the internet and technology. It’s like a video-game gone very badly wrong.

Manchester features heavily as we follow the novel through familiar settings such as Wilmslow Road and Alexandra Park. Bottletown is mentioned repeatedly and supposedly based on the infamous Hulme Crescents, the housing scheme built in 1972 so poorly designed it was demolished 19 years later.

“From every direction the crystal sharp segments of smashed up wine bottles, and beer bottles, and gin bottles, caught and magnified every stray beam of Manchester light. The whole of Bottletown, from the shopping centre to the fortress flats.”

In the trek to find Curious Yellow, we come across Cybercops and Shadowcops who stalk the streets for illegal vurt dealers. Creepy Dreamsnakes from the vurt world are mysterious sources of fear which are thrilling. And there are touching insights that the members of The Stash Riders can be just as human as the rest of us, particularly in Scribble’s relationship with the two other girls in the gang, Mandy and Brid.

The narrator’s incestuous love for his sister throws morality into question. Although this is disturbing, it’s the beauty of the language and the intensity of the imagery which makes it so tempting to read on, making us complicit in the chaos. We want to enter into Noon’s world. Rather than glorifying drug culture, it exposes both its terrors and temptations.

Vurt is not for the faint-hearted. The themes of young destruction in a future city remind us very much of A Clockwork Orange, mixed in with the surrealism of William Burroughs’s Naked Lunch and the messed-up worlds of The Matrix. What is real and what is fake? This is fiction which makes us question the facts on which we are told our social reality is based.

There is meaningful content thoughout, even if direct meaning is not immediately accessible. Rather than reading it literally, enjoying Vurt for the world it evokes as well as the warnings it carries – the danger of indulging fantasy and believing what we see in an increasingly technologized world – can be highly rewarding. Science fiction fans will love it, but it’s far from conventional. And it is as bizarre as it sounds.