MancBook Review: The Myth of Brilliant Summers by Austin Collings 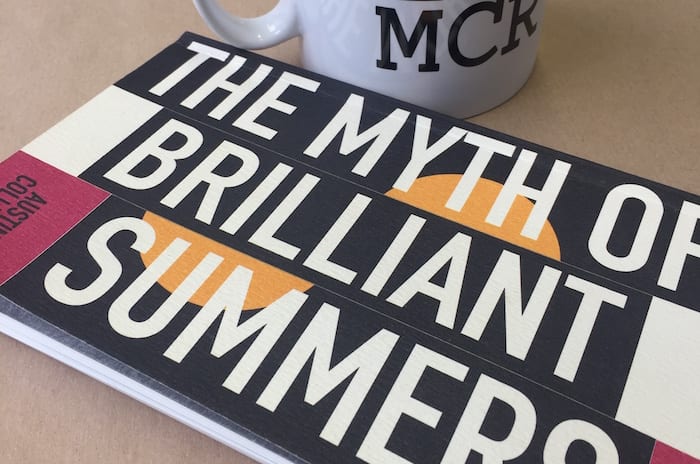 According to an introductory note to the reader, ‘this book is designed to be read on the bus or in the pub before or after they’ve tried to slowly kill you again at school or in work or even at home.’

We are expecting big things from the man of whom The Huffington Post said, “what Morrissey does for song lyrics, Collings does for fiction.”

This isn’t the Manchester of cocktail bars, craft beer and artisan markets selling £3 loaves of bread. This is Manchester without its make-up on. The Manchester of job clubs, bedsits and amusement arcades, where people are skint and street food means a bag of chips or a hot dog from a catering van.

It’s clearly Radcliffe. He mentions places live River Street, Redbank playing fields and the Lord Rag – a pub which was shut down after the book was published following a mass brawl. But if you grew up in Moston or Crumpsall or Gorton or Wythenshawe or any working class neighbourhood, you’ll recognise it.

The stories are mostly about the banal, the mundane, life’s daily defeats – getting sacked, kneetremblers in playing fields, conversations overheard in beer gardens – but with titles that read like song lyrics: All The Sad Young Men of All Ages, Mother Brandy for Sorry Jon, and The Uncertainty of Subways.

They are uncompromising and bleak but with some dark wry humour. Gritty and grim and northern, but more like a David Lynch film than Kes.

This is Coronation Street meets Twin Peaks. Tommy V with its undertones of paedophilia. Adolescents hanging around bus stops in Because We Are Also What We Remember. And the teenage angst of Why Must I Be a Teenager in Love?

Many of them are set in the author’s childhood when he – or his alter ago – spent most of his time looking out of the classroom window. “Look where it’s got me.”

Many of them are set in summer, hence the title which probably refers to the nostalgic view many people have of childhood as one endless summer.  Not here it’s not.

Collings takes risks with his structure and language so it’s not always an easy read.  Some are baffling. Some aren’t. Some may have been written under the influence of alcohol or some illicit substance. You may need to re-read some for everything to sink in. It’s not the type of book you’d pick up and read start to finish. It’s more of a delve-in sporadically type of affair.

What all the stories have in common is that they’re beautifully written, like prose poems.

“And days passed into days with dreadful certainty, as if they were on repeat: but we were not old enough to change the channel.”

As well as the short stories, musings, observations, reflections and vignettes, there are some random and rather odd pictures including a pog of former Coventry goalkeeper Steve Ogrizovic with his magnificently misshapen broken nose.

The Myth of Brilliant Summers is one of those books you won’t forget. And one you will re-visit. It’s like a box of chocolates and, like any box of chocolates, you’ll like some more than others. They’re mostly hard centres but there’s a few soft ones, too. There are 38 to choose from so if you don’t like one, try another.

It may be a work of fiction but it feels truer and more authentic than a best-selling book we recently reviewed about growing up in Manchester in the sixties.

The author is clearly a very talented writer and would probably be rich and famous and living in LA if he was screenwriting or scriptwriting or writing lyrics for a band.